While the global energy storage industry has continued its pace of rapid growth during the past year, well-established markets remain highly concentrated in specific regions of the world. In fact, Navigant Research expects the top five country markets to account for 56% of the new energy storage capacity forecast to be built in 2017. Over the coming years, this dynamic will change, as the industry is already seeing significant geographic diversification.

Navigant Research’s latest Country Forecasts for Energy Storage reports explore the growth trends for energy storage at the utility-scale and distributed levels in 26 countries around the world. This article highlights the leading countries for energy storage identified in those two reports, explores the factors shaping these markets, and explains how these and other factors can be used to determine where and when new markets will emerge.

The economics of new energy storage projects are improving in countries globally, driven by:

Although there are many overarching drivers in this industry, the specific dynamics of individual markets vary considerably. There will be a varying mix of storage technologies and applications in different countries, depending on local conditions. One key factor differentiating markets is the attractiveness of storage in different market segments, specifically the split between front-of-the-meter (FTM) and behind-the-meter (BTM) systems.

A major focus for Navigant Research is understanding the specific dynamics of energy storage markets to forecast when and where significant growth will occur. Factors such as electricity market structure, retail rates, and renewable energy deployments (among others), have resulted in energy storage markets taking shape in unique ways in different countries. For example, some countries have seen major growth in utility-scale FTM storage deployments, but little to no activity on the BTM side. Alternatively, other countries and regions have seen growing popularity of customer-sited BTM storage systems, but much less demand for FTM projects.

To date, the utility-scale market has been the largest and most well-established segment of the energy storage industry. Navigant Research’s recent analysis indicates that the largest markets worldwide in 2017 will be the United States, China, Germany, Japan, and the United Kingdom. Several countries have emerged as attractive and potentially high growth markets for utility-scale storage over the past year. Most notably is the United Kingdom, which is now expected to be the fifth largest utility-scale market in 2017 despite having limited activity just two years ago.  Growth in the UK market has been driven both by utility procurements of storage, including the 201MWs of storage contracted to provide enhanced frequency response (EFR), and improving economics for merchant projects bidding into capacity and other ancillary service markets.

The other markets which have seen the most growth and new activity in the past year have been Australia and India. While Australia has been a leading market for distributed energy storage for years, recent developments including the South Australian blackout in late 2016 and the increasing need to effectively manage new renewable energy on the grid.  India has been viewed as a major potential market for utility-scale storage for years, however recent growth in the market has been slower than many predicted. Despite failing to meet early expectations, activity in the Indian market has picked up significantly in just the past 6 months.

India’s recent tender for utility-scale storage to help integrate new solar PV facilities received much greater interest than anticipated. Additionally, utility interest in storage has picked up, with the National Thermal Power Corp. (NTPC) recently inviting bids for a 24MWh storage system to be built on the country’s Andaman Islands. After years of slower than expected growth, India is projected to emerge as the third largest country market for utility-scale storage by 2022, trailing only China and the United States in expected annual capacity additions.

These countries all have several common market drivers that have allowed for more rapid market maturity. Increased support for energy storage from governments and utilities leads to regulatory reforms that level the playing field for technology and have been key in these five countries. Additionally, the presence of local storage technology manufacturers and project developers, increasing deployments of renewable energy, and the need for new grid infrastructure have played important roles in these markets. Although many of these drivers also play a role in the distributed storage segment, several unique factors will dictate demand for BTM storage systems in each country.

On the distributed BTM side of the energy storage industry, Navigant Research projects that the leading country markets in 2017 will be the United States, Germany, Japan, Australia, and South Korea. Outside of these five countries, which have been leading the industry for some time, several additional country markets have recently seen significant growth and new activity.  The United Kingdom is emerging as a strong near-term market for distributed energy storage. Increasing BTM storage demand in the U.K. is driven by falling feed-in-tariff rates compensating solar PV owners for excess generation and the emerging opportunities for distributed systems to be aggregated into virtual power plants (VPPs).

New VPP models, such as the 185MW network of resources that Limejump and Anesco are developing, increase the value and available revenue streams for distributed systems by bidding their stored energy into capacity and ancillary markets for grid operators. Elsewhere in Europe demand for BTM storage is increasing considerably in Italy, where feed-in-tariff rates have fallen far below retail electricity prices for most residential customers. This pricing spread combined with the country’s strong solar resources have made solar + storage systems an economical investment for a growing number of customers.

Although some of the factors influencing utility-scale markets also dictate the potential for BTM storage, it is important to consider several additional factors for this market segment. The two most important drivers in the five leading distributed storage markets have been the availability of government subsidies to lower upfront costs and the increasing popularity of distributed solar PV. However, subsidies and growing distributed solar PV capacity are not sufficient to establish a robust BTM storage industry.

Two other critical factors in the early success of these markets are the relatively high electricity prices, with significant demand- or time-based charges, and the efforts of innovative local BTM storage providers to focus on new business models. The presence of local vendors is crucial, as these companies are working to crack the code lowering system costs, and expanding the system-wide value of BTM storage by supporting the needs of utilities and grid operators.

Developments in the leading markets listed in this article have been extensively covered by Navigant Research and the broader industry media. The aim of Navigant Research’s latest Country Forecasts for Energy Storage reports was not only to evaluate the market size for leading countries, but also to project the next countries that will see significant growth over the coming years. This exercise requires determining the most relevant factors that can be analysed for each country to understand the potential for growth. Subsidies and regulatory reforms have been crucial in leading storage markets to date; however, there is limited ability to forecast when these types of developments will take place. Thus, Navigant Research had to develop a methodology that could analyse current market dynamics to evaluate a country’s storage potential.

The figure below illustrates some of the primary factors utilised in Navigant Research’s energy storage market forecast model to quantify potential growth in a country. While many of the factors will affect the overall industry, other factors are specific to either utility-scale or distributed market segments. 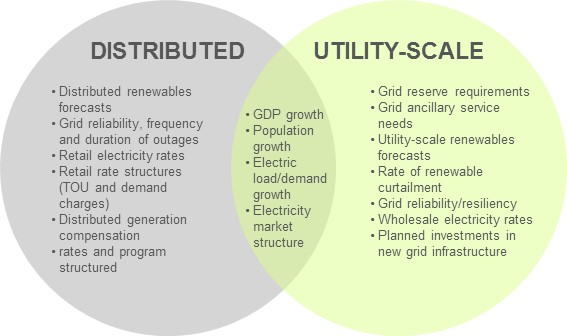 Using the factors listed in the figure above, combined with data on existing and planned projects and the activity of vendors and developers, the current and future market size for energy storage in a country can be estimated. However, significant uncertainty remains around growth trajectories and the overall market potential in each country. Particularly in emerging markets, many developments could greatly accelerate or impede the storage industry. Given the diversity of energy storage markets globally, it is critical for stakeholders in this industry to understand the market drivers and dynamics seen globally—and how they will affect the size and shape of the energy storage market in any country.