The pipeline for utility-scale battery storage in the UK has been continually increasing and is now over 20GW across more than 800 projects. A recent surge in submitted applications for battery storage has led to a record breaking quarterly submitted capacity for Q2’21.

By the end of Q2’21, the pipeline has jumped from almost 17GW of total capacity to over 20GW, implying that the next few years could show a major increase in energy storage deployment.

The graphic below shows the planned capacity by project size by quarter for battery storage projects in the UK. 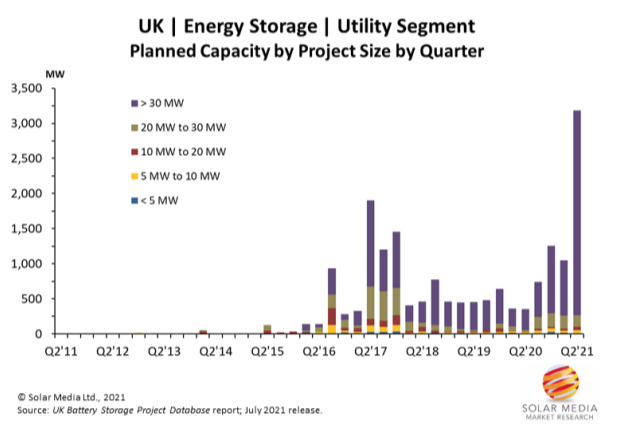 Activity in the energy storage market started mainly during 2015 and was followed by a surge of applications in 2017. For the next few years, submitted capacity levelled out, but 2021 has seen a much higher peak in submitted capacity so far.

While the pipeline contains a mix of project sizes, the capacity is becoming increasingly dominated by large-scale projects, due to the lift of the 50MW threshold. Many applications have been submitted this year for sites larger than 30MW in capacity.

A spike can be seen during Q2’17 as developers submitted applications after seeing how successful other projects were in the 2016 EFR auction. The recent surge in applications during Q2’21 has been driven by the successful approval of previous applications and simply because average project size is becoming much larger. 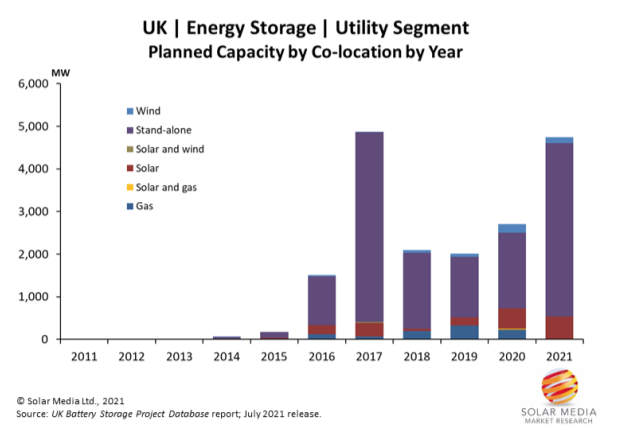 2021 will be a record-breaking year for submitted capacity for energy storage in the UK. Image: Solar Media Market Research

Typically, project size depends on the type of project being developed; standalone sites are usually of large capacity whereas co-located projects tend to be much smaller. While a broad mix of project sizes has been deployed, operational capacity is expected to increase rapidly in the next few years due to the growing pipeline.

Many developers are now submitting applications for new-build wind and solar farms co-located with battery storage. Since these projects are usually smaller in size, the market will continue to be driven by large capacity, standalone sites. 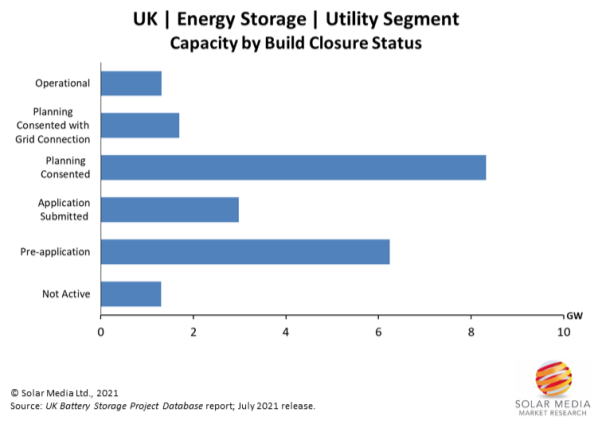 Approximately 10.5GW of capacity has been approved in planning, with the potential of being deployed over the next few years. Image: Solar Media Market Research.

The pipeline for energy storage has increased much faster than deployment levels, with over 20GW of planned capacity and 1.3GW of operational capacity. Just over 1GW is not active in the pipeline, meaning the applications have been refused or the developer is no longer going ahead with construction; however, these sites still have the potential for future deployment.

The pipeline for energy storage has increased significantly this year and activity in the market is becoming very active. We are likely to see deployment rates rise over the next few years as sites within the 800-plus of projects are installed.

All projects are captured and fully audited in the UK Battery Storage Project Database report from Solar Media Market Research. To access this information – updated monthly – please contact us via the report landing page here.