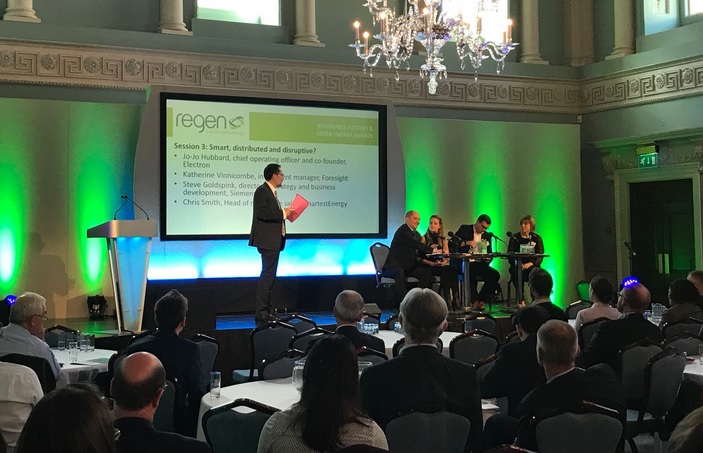 Katherine Vinnicombe of Foresight Group (far right) on the panel at the Renewable Futures event this week. Image: Regen / Twitter.

Battery storage technology costs will have to fall by a further 30% before projects in the UK are feasible without lucrative frequency response revenues, a leading investor has said.

Speaking during yesterday’s Renewable Futures event organised by Regen, a non-profit consultancy for low carbon energy, Katherine Vinnicombe, investment manager at Foresight Group, made the remark amidst a discussion centring around potential disruptors in the UK's energy market.

Foresight has been one of the early investors in UK battery storage assets, buying up two projects backed by Enhanced Frequency Response (EFR) contracts.

Those four-year deals, Vinnicombe said, are responsible for around 70% of the projects’ development cost and, as a result, the investor believes the merchant risk of recouping the remaining 30% from alternative revenue streams like arbitrage is palatable.

But the same cannot be said for projects without access to similar frequency response revenues, a market that is already showing signs of saturation.

With National Grid expecting to require around 400MW of frequency response services – half of which is already contracted out under the EFR deals – just 200MW of contracts will be up for grabs under other frequency response markets. With a large number of battery storage projects aiming to come on stream, Vinnicombe said she expects such saturation to send contract prices tumbling. Head of business development at National Grid Claire Spedding recently said developers should not rely too heavily on income streams for grid services, with particular reference to two-year contracts for firm frequency response (FFR).

Reducing or entirely removing revenues from frequency response would cause standalone battery storage projects to source revenues entirely from arbitrage and access to the balancing mechanism, and technology costs will have to fall in line with those revenues in order for projects to economically viable.

Co-located projects could provide a minor stopgap for developers however. Rather than technology costs falling, retrofitting batteries onto generators with pre-existing grid connections and associated infrastructure could achieve similar cost reductions to bring the entire project cost down to manageable levels.

One UK company, Anesco, has been a keen developer of co-located storage, retrofitting 10 batteries on existing solar farms and utilising similar designs to deploy Clay Hill, the UK’s first subsidy-free solar farm. Vattenfall are too co-locating solar and onshore wind and a raft of other developers are investigating similar.

Vinnicombe said these projects could represent the “next wave” of storage assets connecting to the grid in the UK, but these would require very specific circumstances to be economical – in much the same way Clay Hill did – and meaningful development would have to wait for technology costs to fall.

She did however suggest that further opportunities lie in behind the meter storage applications that enable intensive users of energy to peak shave, and also backed PPA (power purchase agreement) providers and aggregators to bring other interesting revenue models to the market which could make projects palatable.