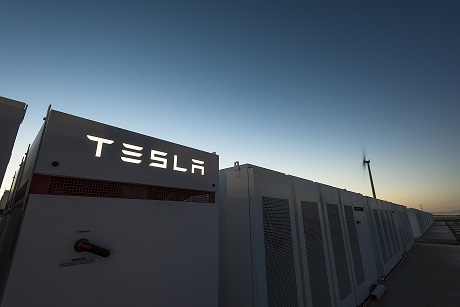 A Tesla spokeswoman has confirmed that the company’s current undertaking to build a 129MWh battery storage facility will not use long-time supplier and partner Panasonic’s lithium-ion cells.

A Tesla representative in the UK confirmed to Energy-Storage.News a report carried on the weekend by Japanese newspaper Nikkei, which said the EV and stationary energy storage maker, parent company to solar installer SolarCity, is instead using battery cells made by South Korean supplier Samsung SDI.

Tesla has been partnered with Japanese consumer electronics, solar module and lithium battery maker Panasonic for construction of the Nevada Gigafactory, the mega-facility geared towards producing upwards of 35GWh of battery packs per year by the early 2020s. Panasonic is also equipment and technology provider to Tesla-SolarCity’s PV module manufacturing lines, pilots of which are being established at a second “Gigafactory” location in Buffalo, New York.

Nikkei had said the reason for the “snub” was that with Tesla CEO Elon Musk having promised to deliver the finished 100MW / 129MWh project in South Australia within 100 days of contracts being signed, Samsung looked the surer of the two providers to be able to supply the requisite lithium cells within that timeframe.

The Tesla representative Energy-Storage.News spoke to would not directly confirm that this was the case, but did say the cells were coming from Samsung SDI and were being finished and assembled into packs at the Nevada Gigafactory.

The spokeswoman also forwarded some updates on the South Australia project, being deployed at Hornsdale Wind Farm, a facility owned and operated by Tesla’s development partner on the project, French renewables developer Neoen. Tesla was awarded the project from a list of 90 competitive bidders.

An interconnection agreement was signed on 29 September with transmission network provider ElectraNet and approved by the Australian Energy Market Operator (AEMO), Tesla said. This means that Tesla now has 100 days to complete the project – or deliver it free of charge. A special evening launch event held by Tesla was powered entirely with the company’s stationary energy storage solutions.