The first ever wind and solar hybrid project in India, completed in April 2018, is to be retrofitted with energy storage after strong winds this year led to a curtailment of solar production.

Speaking to our sister site PV Tech at the REI Expo in Greater Noida, Rahul Munjal, chairman of Delhi-headquartered clean energy firm Hero Future Energies, said the plan is to use lithium-ion battery storage technology and the firm is currently in the process of procuring a technology supplier.

Munjal added: “The hybrid plant saw extremely good winds this year and when it saw good winds we had to back down solar because there was a constraint on the capacity we could put on the grid.

“Now to augment that, we feel the right thing to do is rather than waste the energy, store it.”

The second reason for adding a battery is that Hero wants to learn more about the technology by using it on its own plants and the battery will act as a pilot. If the trial goes well, then Hero will consider retrofitting some of its other renewable energy projects with storage in the future.

The hybrid plant is located in the state of Karnataka and PV Tech attended the inauguration in April this year, publishing a lengthy insight on the project. The plant at Kavithal, Raichur District, which included an existing 50MW wind farm, now has a neighbouring 28.8MW solar PV site to form a hybrid system. The project’s evacuation capacity remained at 50MW since the primary aim was to address grid-integration concerns around variable power coming from renewable energy. The off-takers of the power are a number of unnamed private companies also based in Karnataka.

Back in April, Munjal said he believes that large-scale coupling with energy storage will proliferate in the next two to three years, although price remains a problem for now.

Solar Energy Corporation of India (SECI) recently issued a Request for Selection (RfS) document for 2.5GW of hybrid wind and solar projects to be connected to the Interstate Transmission System (ISTS).

The Ministry of New and Renewable Energy (MNRE) has also issued an amendment to its National Wind-Solar Hybrid Policy, clarifying that any form of energy storage – not just batteries – can be used in hybrid projects. 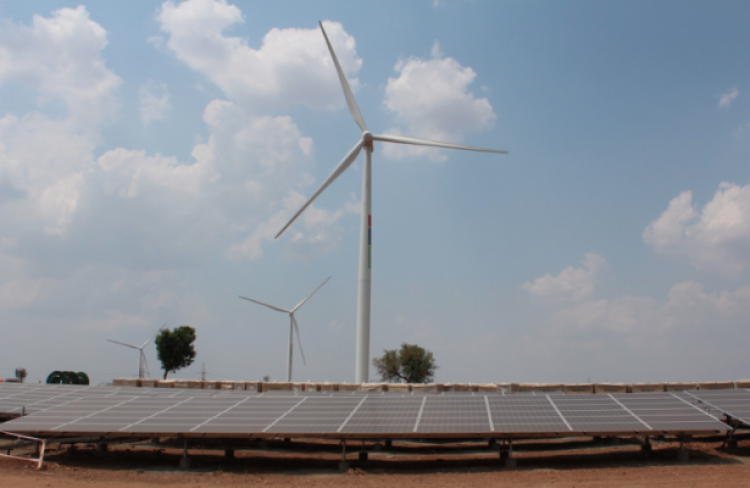