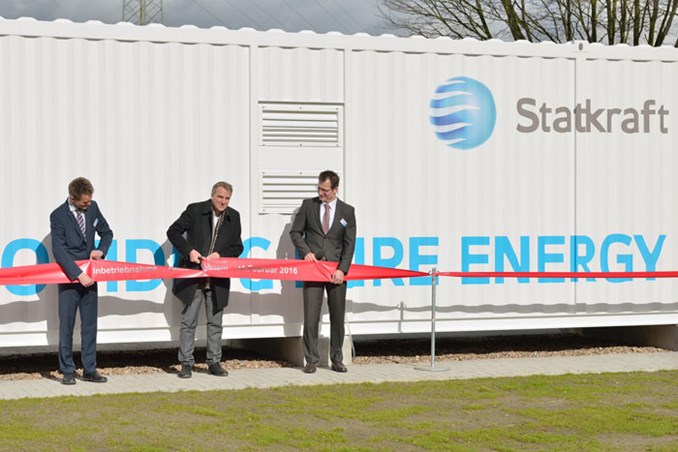 Statkraft representatives at the 2016 launch of a battery energy storage project in Germany. Image: Statkraft.

Statkraft has partnered with energy & meteo systems to launch a 1GW wind, solar and battery storage virtual power plant in the UK, which it says will further renewables’ penetration into the country’s energy market.

The VPP will combine the renewable generators with flexible gas engines and compare its output to Day Ahead, On-the-Day and cash-out price forecasts, which will enable real time optimisation of its power trading on the wholesale market.

And Statkraft is to double the VPP’s capacity by the summer, stating that making the best of its flexibility will help integrate further renewables into the UK power grid.

Energy & meteo systems has delivered the VPP software which connects, coordinates and monitors the generators’ power outputs through a common control centre, allowing it to act within various energy markets as a conventional power station would.

Duncan Dale, vice president for sales and new products at Stakraft in the UK, said that it was the firm’s business model to market renewable assets “with maximum efficiency” and match power output with market demand within seconds.

“The increasing share of renewable energy in the UK will require a maximum of flexibility in the British power grid. By integrating batteries and engines into the virtual power plant and optimising their operations we can provide this flexibility reliably,” he said.