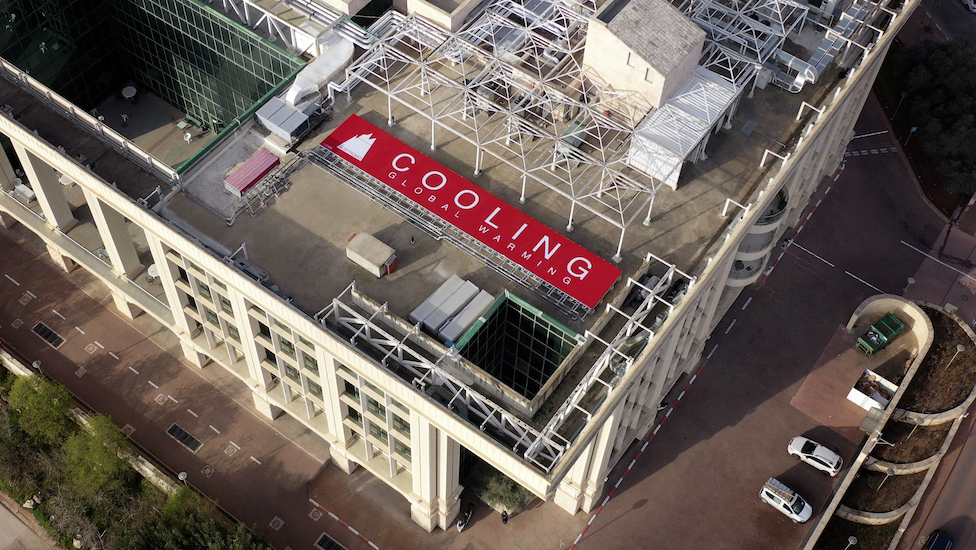 The cooling of commercial and industrial (C&I) buildings accounts for a significant percentage of energy use and greenhouse gas emissions (GHGs), but can instead be turned into “powerful energy assets,” rather than a burden on the grid, according to the CTO of a company attempting to achieve exactly that.

Israel-headquartered technology company Nostromo has developed a “water-based behind-the-meter (BTM) energy storage system,” which can be installed on the rooftops of C&I buildings and help manage their energy needs. The water is frozen into ice using electricity when Nostromo’s thermal ‘IceBricks’ are being charged and then thawed to discharge the stored energy.

Yaron Ben Nun, who is founder as well as chief technology officer of Nostromo, told Energy-Storage.news that the IceBrick has a round-trip efficiency greater than 85% and is capable of 94% depth of discharge in every four-hour cycle. The company also claims the equipment and its ‘cells’ do not degrade over time, do not rely on the use of rare or critical materials for their construction and are recyclable. Ben Nun said the equipment is “modular, compact and compatible with most commercial and industrial buildings,” as well as being “powerful enough to have a significant impact”.

The CTO quoted figures from the International Energy Agency (IEA) that estimate 40% to 45% of electricity is used to power cooling systems around the world, and claimed the Nostromo solution can reduce the total strain on the grid by as much as 25%, through shifting about 50% of customer electricity demand for four to five hours at a time. C&I buildings overall are estimated to consume about 55% of the total electricity generated worldwide, but are largely excluded from many peoples’ thinking about the transition to clean and distributed energy sources, Ben Nun said.

“Currently, our main market is California. It’s the most advanced state in terms of aggressive renewable integration goals and it also has the most supportive rate plans for load shift capabilities enabled by energy storage,” he said.

This month, Nostromo will be cutting the ribbon on a 600kWh demonstration project on the rooftop of a medical device manufacturer’s premises in Jerusalem, Israel, and has recently also agreed terms for a 1.5MWh system to be installed to serve the prestigious Hilton Beverly Hills and Waldorf Astoria hotels in California, as well as a 900kWh project for an office building and a Memorandum of Understanding (MoU) to work on projects for shopping mall giant Westfield in the US.

The company floated on the Tel Aviv Stock Exchange in late June through a merger with Somoto, a software and media services company, which Nostromo said was a transaction that raised US$13.6 million for the energy storage tech company. Going public will help the company accelerate its market penetration and “pursue widespread implementation of our technology,” Ben Nun said in a statement at the time.

Ben Nun told Energy-Storage.news that Nostromo sees potential for the technology “wherever there’s a need for commercial cooling: everywhere”. The company is able to deploy using two different business models, both based around forming long-term relationships with customers.

One is a no-money-down plan, then Nostromo’s revenues are based on the energy cost savings the customer makes over 20 years, similar to how many behind-the-meter lithium-ion battery storage companies share savings with their customers for helping them to reduce their peak electricity demand. The other is to sell the systems to customers that are happy and able to finance the upfront cost, through a distributor network. Yaron Ben Nun said that in both business models, Nostromo will also be able to accrue additional revenues by supplying grid services, which again can be shared with the customer.

While the need to create more efficient and sustainable cooling, particularly air-conditioning, has been spoken about for a long time — Tesla CEO Elon Musk once mused that it would be a challenge he would want to tackle given the impact it could have on the sustainability of energy — there have only been a small handful of companies that have sought to take on the challenge using different forms of thermal energy storage.

These include Ice Energy, which targeted the residential and small commercial sector with its Ice Bear cooling technology, but ran into difficulties in 2019 before its technology was acquired by Thule Energy Storage, which continues to market and deploy the systems, Viking Cold, which mainly markets its phase change materials-based energy storage for long distance food transport needs and large warehouses, Axiom, which mainly targets supermarket chains and their specific needs and a few others like Calmac, which are more direct competitors to what Nostromo does.

For technologies that cool buildings sustainably to thrive, there need to be regulators that understand the huge potential, Yaron Ben Nun said. Regulatory environments and incentives to enable the adoption of the technologies at scale are needed, but don’t yet exist.

“Our goal is to show the world that there’s a safe, cost-effective and efficient behind-the-meter solution,” he said.

“Similarly from the customer side, the most aware commercial and industrial customers understand their impact on the grid, and are actively looking for ways to reduce costs and environmental impact. However, some commercial and industrial entities still aren’t aware they need energy storage. They’re unaware of how cooling negatively impacts the grid and that sustainable storage is pivotal in the transition to renewable energy. For this reason our strategy is to seek out AAA customers in each customer segment for them to become the driving force behind our technology.”