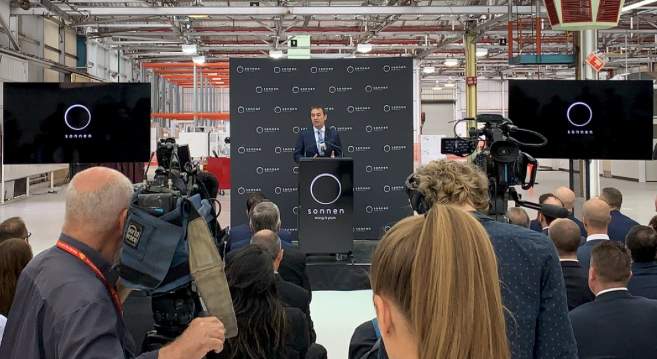 Steven Marshall, the Premier of South Australia, has welcomed the start of assembly-line work at Sonnen’s new factory in Adelaide, while rival Tesla’s virtual power plant (VPP) in the state is beginning its second phase of development.

Tesla has delivered some of the biggest battery storage facilities in Australia – indeed in the world – in the state, including the 129MWh Hornsdale project, famously completed in 100 days from the signing of grid connection contracts. Sonnen meanwhile is mostly targeting the home solar-plus-storage market in a country where high electricity prices, abundant sunshine and the ongoing phase-out of feed-in tariff subsidies for solar PV make the technology an economic proposition in many regions.

Premier Marshall and state energy and mining minister Dan van Holst Pellekaan said that the start of operations by Sonnen at a former car factory in Elizabeth, north Adelaide, is a “significant boost for local jobs”. The pair claimed that their ruling Liberal Government in the state and its Home Battery Scheme, offering rebates for equipment purchases, had been “pivotal to securing Sonnen’s investment in South Australia”.

The factory will assemble systems to be marketed and sold into Australia as well as the Asia and South Pacific markets. Marshall referred to a planned 50,000 units being made in Adelaide over the next five years, creating around 430 manufacturing and installation jobs in the state.

In addition to making a AU$100 million (US$73.16 million) investment in the Home Battery Scheme, the state government said its stipulation that locally-produced or assembled content would enjoy priority status also helped bring the German manufacturer into South Australia. In September, Sonnen CEO Christoph Ostermann said that he believed Australia will be “the world’s number one market for energy storage systems” in the near future.

Also this week, van Holst Pellekaan said the first phase of a virtual power plant (VPP) trial, linking together battery storage systems in a hundred domestic properties, has been a success and announced the launch of the trial’s second phase. In collaboration with provider Tesla, 1,000 properties managed by local authority Housing SA will now receive home energy systems including solar PV and Tesla Powerwall battery storage.

As reported by Energy-Storage.news as the first phase got underway, the VPP could grow to include 50,000 properties (around 250MW), although this remains subject to finance and how the second, 1,000-home phase is evaluated after going online. The first 100 batteries deployed reduced household grid consumption by 70%. While this helped lower energy bills, it is also hoped that the introduction of a retail partner, Energy Locals, will help boost competition.

“We’ve worked hard to get a new retail partner and are glad that Energy Locals will deliver increased competition in the electricity retail market,” van Holst Pellekaan said.

“The VPP will deliver cheaper electricity to some of South Australia’s most disadvantaged households whilst increasing the reliability of the state’s electricity network.”

In a separate VPP endeavour in the state, Simply Energy, the Australian retail arm for European energy supplier ENGIE will aggregate 6MW of Tesla household batteries together with 2MW of demand response at commercial premises in Adelaide in a project supported by the government-backed Australian Renewable Energy Agency (ARENA). Tesla Powerwall 2 13.5kWh batteries are being installed at “up to” 1,200 Adelaide households, with 10 commercial business also involved.

At the other end of the scale, just a few days ago, South Australia's government also introduced a AU$50 million (US$36 million) Grid Scale Storage Fund (GSSF) to help accelerate the deployment of new large energy storage projects.