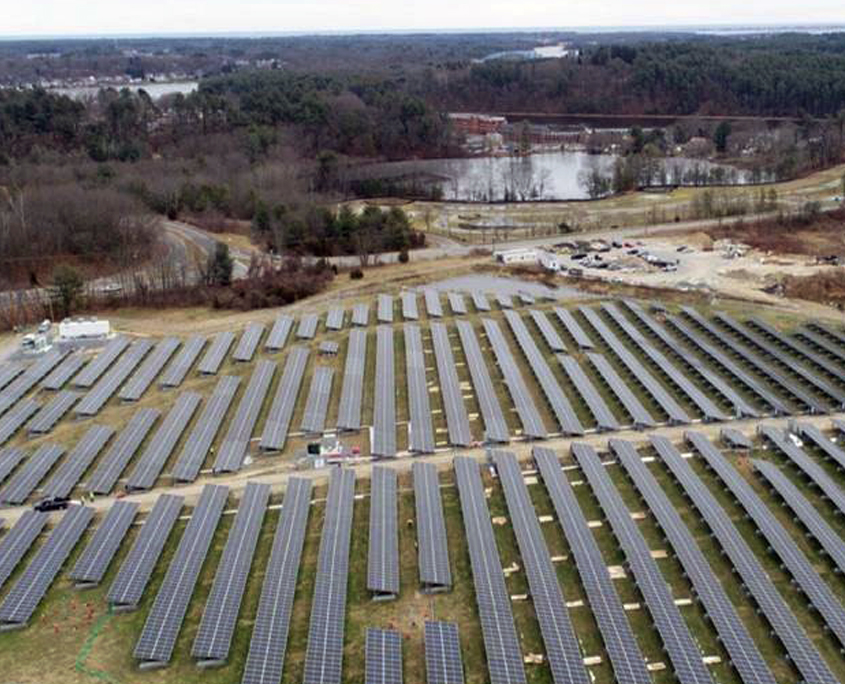 The 4.5MW solar PV array onsite. Kearsage and NEC partnered with the City of Amesbury’s municipal authority on the project. Image: Kearsage Energy.

A municipal landfill in the City of Amesbury, Massachusetts, has become the latest site to host a solar-plus-storage project under the state’s SMART programme to promote economically viable clean energy.

The project’s partners also put numbers on the expected economic benefits. The City of Amesbury will save around US$4 million in municipal spending on energy over 20 years, panning out at US$200,000 or so every year. This is from a combination of energy credits, lease revenue and tax generated by the site’s operations.

Connected to National Grid, the battery and PV system will play into the New England ISO (NE-ISO) markets, which made provisions to enable energy storage to participate in its wholesale markets during 2019. Along with the Solar Massachusetts Renewable Target (SMART) incentive and the state’s Clean Peak Standard, which has put a higher value on low carbon-generated electrons injected to the grid at times of peak demand than fossil fuel power, the region became a hotbed of solar-plus-storage activity last year.

While Energy-Storage.news reported on multiple technology providers including NEC and Sungrow hitting that market last year, for Kearsage, this is the company’s first project to include energy storage as well as solar in a pipeline that Kearsage claims totals 250MW. Kearsage said it has built up partnerships with more than 40 public organisations in New England and in New York – and even more recently emerged hot market for battery storage – and the City of Amesbury is not exception.

“The Amesbury project is a superb example of how all those objectives can be met when municipal leaders are forward looking and open to win-win partnerships.”

GSS, in conjunction with NEC’s AEROS controls platform, can be used for both AC- and DC-connected applications. NEC was behind Massachusett’s first grid-scale standalone storage project, also for a municipal utility (Sterling Municipal Light Department) and completed in 2016. The company has said that that project served as a pathfinder in many ways.

Then, last year the company said that the contracting of six projects in New England (in Massachusetts and Maine, totalling 20MW), was evidence that the region’s municipal utilities are able to procure and put into operation unsubsidised energy storage systems which “pay dividends” for the communities they serve.