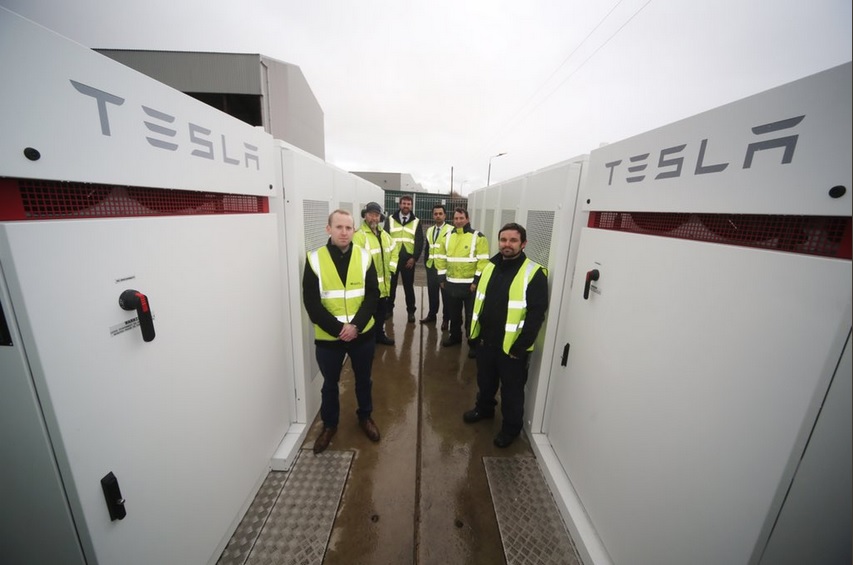 A glass packaging facility in Scotland is getting a 2MW Tesla battery on a ‘no-money-down’ deal after Irish state-owned utility ESB agreed to take on the risk for raising commercial revenues from the asset.

The project for Ardagh Glass’ packaging plant in Irvine, west Scotland, was completed a couple of weeks ago by Ardagh and ESB (Electricity Supply Board), headquartered in neighbouring Ireland. The battery system is aimed at helping Ardagh manage its onsite electricity costs.

It will store power during periods of low demand from the grid for use at peak times while backing up the facility’s must-run functions. ESB also said it would also use the battery for delivering frequency response services to the grid via a separate operating platform, supplied by GridBeyond, an aggregator formerly trading under the brand name Endeco.

ESB corporate press officer Susan O’Connor told Energy-Storage.News that the project will be installed on an outdoor plinth at the Irvine facility, utilising existing electrical switchgear onsite. ESB’s Smart Energy Services division will be responsible for the peak demand management and backup functions of the system while GridBeyond will coordinate and execute market participation for grid services.

O’Connor also explained how ESB was able to “own the battery and deliver it to Ardagh with no investment from their side.”

“As a utility operating in all sectors of the market, we are able to invest in energy assets for their lifetime, and that allows us to manage one of the big challenges here: the revenues, for a significant investment, are only certain over a period of one or two years, versus 10+ years of the asset lifetime,” O’Connor said, adding that Tesla’s 10-year warranty added some investment security to the deal.

ESB said it is targeting businesses that spend more than €1 million (US$1.21 million) a year on energy with such schemes, working to reduce both costs and emissions.

Our latest #Sustainability initiative in partnership with @ESBGroup Smart Energy Services. The biggest behind-the-meter storage system in Europe and the first ever in the #glass industry. #TESLA pic.twitter.com/O4a4xD0BPK