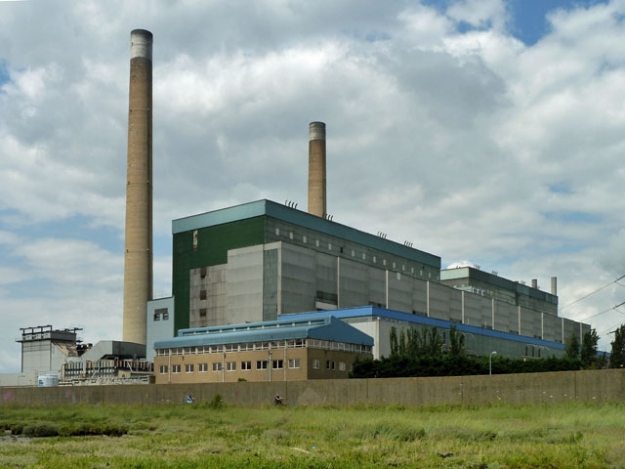 RWE’s Tilbury Power Station is to host a 100MW battery as part of transformation plans at the site. Image: Robin Webster.

RWE Generation is investigating the construction of a 100MW battery at its Tilbury power station in England as part of plans to convert the former coal-fired plant to a gas peaking plant.

The power generation arm of the RWE Group has submitted a scoping report outlining plans to convert the main plant of the site into a 2.5GW Combined Cycle Gas Turbine (CCGT) power station. An Open Cycle Gas Turbine (OCGT) / Peaking Plant generating up to 299MW will also be planned alongside the energy storage facility.

The Tilbury B Power Station site in Thurrock, Essex on the bank of the river Thames, which offers localised cooling to the site, will become the Tilbury Energy Centre under the plans.

Due to the size of the project, an application is expected to be submitted to the Planning Inspectorate in the first quarter of 2019.

Following a period of decommissioning, the demolition of Tilbury B (and remaining Tilbury A structures) commenced in March 2016 and is expected to be completed by the summer next year. If successful, the proposals will then be implemented with an environmental impact assessment to be undertaken against this baseline.

Currently, the largest battery projects in the UK stand at 50MW with Statera’s Pelham Storage project, thought to have been completed in December, and EDF’s West Burton battery which is due to begin delivering Enhanced Frequency Response (EFR) to National Grid this summer.

This is closely followed by Centrica’s 49MW Roosecote battery, which has yet to be confirmed as completed but saw construction begin over a year ago.

However, RWE’s battery would be double this size and comes as a number of similarly sized projects have begun to emerge in both the UK and Ireland.

Lumcloon Energy in Ireland confirmed to our UK sister site Clean Energy News, reports that it has partnered with Hanwha Energy Corporation and LSIS to invest €150 million (US$183.34 million) in the development of two 100MW battery energy storage projects as part of sustainable energy projects at Lumcloon and Shannonbridge, in Co Offaly.

This followed a planning application submitted by Centrica to Kilkenny County Council earlier this year that could see a 100MW battery built in Ireland.

Meanwhile, in a similar strategy to that being followed by RWE Generation, Drax confirmed last year that it was planning to add a 200MW battery storage project to its coal-fired power station in North Yorkshire in an effort to add value through greater flexibility and extend its operation.

Both this project and those of Centrica, Statera and Lumcloon Energy are all planning to provide services to the respective grids of the UK and Ireland as their main revenue sources, using the large generators of their proposed locations to grow in scale.

Lauren Cook, analyst for Solar Media Market Research, explained: “Due to planning requirements in the UK, stand-alone battery projects are unlikely to go above 50MW as they would be classed a Nationally Significant Infrastructure Project (NSIP) and would find it more difficult or too expensive to secure planning.

“The larger battery applications we are now seeing in the UK are being submitted as part of large-scale generation projects which already have NSIP status. The inclusion of battery storage in these allows the generation sites to provide balancing services such as frequency response, allowing generation that would normally be considered baseload to access revenues that are available for flexible technologies.

“This is also the case in Ireland despite the differing planning rules, with these companies recognising the value that will be placed on flexibility going forward as systems become more distributed.”