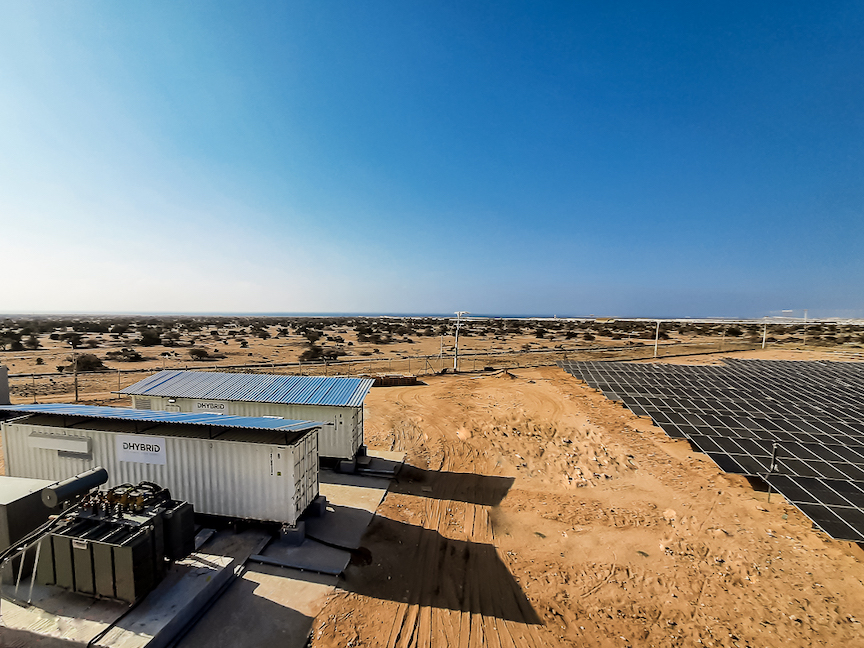 DHYBRID said its microgrid controls and SCADA enable the battery system in Somaliland to operate either as part of the grid, or alongside it. Image: DHYBRID.

Madagascar’s first utility-scale solar power plant is to be retrofitted with battery storage and a 20MW expansion of its generation capacity.

The 20MW Ambatolampy photovoltaic (PV) power plant in the central highlands of the island nation off the east coast of the African continent, went into operation in 2018. State-owned utility JIRAMA and power project company Green Yellow Madagascar, which developed the plant, said earlier this month that the plant will be expanded to 40MW capacity and fitted with a 5MWh battery system.

Construction is scheduled to begin this month and the upgrade is expected to be completed by the end of this year. Green Yellow Madagascar is jointly owned by French clean energy company GreenYellow and pan-African industry group Axian and the shareholders approved the financing of the more than EUR17 million (US$20.26 million) investment required.

Financial backing has come from French investment bank Société Générale, the Private Infrastructure Development Group — which supports infrastructure investment in southeast Asia and sub-Saharan Africa — and economic development group African Guarantee Fund, along with Madagascan banks BMOI and BNI Madagascar. All of those were involved in the financing of the existing first phase of the Ambatolampy plant.

Solar PV module manufacturer JinkoSolar said that it will deliver a 1.2MWh battery energy storage system for an undisclosed customer in West Africa.

“For us, this is a milestone project of delivering ESS system to Africa. It is one of our initial storage projects globally on this scale using DC-coupling,” JinkoSolar’s chief marketing officer Gener Miao said.

“Africa is a very promising market for energy storage due to relatively poor state grid infrastructure and high electricity price, there is a strong potential to replace peaker gas or coal fired plants in Africa with cleaner alternatives like solar made dispatchable using batteries.”

DC-coupling is growing in popularity in established solar PV markets like the US due to the lower required balance of plant costs and ability to capture ‘clipped’ solar power from times of peak production versus AC-coupled plants.

The batteries are charged up directly from the plant when there is surplus energy production that would otherwise be lost and then stored before being injected into the grid when needed and can also be used for grid services like frequency regulation or commercial and industrial (C&I) peak shaving.

German microgrid tech company DHYBRID said that a project it has recently completed in Somaliland will help reduce the costs of electricity for customers in the port city of Berbera.

The battery storage system is apparently Somaliland’s largest to date and is used to help make the grid more stable, while the microgrid has enabled the increase of distribution load-bearing capacity and efficiency of power generation. According to a press release from DHYBRID sent to Energy-Storage.news last week, the Berbera city grid’s power factor has increased by 20% since the microgrid was added.

Somalia and the Republic of Somaliland have high electricity prices, but the project has enabled the local utility to reduce costs and correspondingly reduce the electricity tariff to customers. The local port in Berbera is undergoing a half billion dollar expansion and the city also has airports. DHYBRID said that new power generation assets being built, including solar PV plants, require coordination via central controls systems of the type the company has deployed, to help integrate these new resources while keeping the grid and reliability of supply stable.

“Various generators within the grid must be continuously coordinated, especially when renewable energies are involved. Otherwise, problems with the grid frequency and voltage will become unavoidable, making it impossible to utilize all the available power,” DHYBRID CEO Benedikt Böhm said.

“It is simply not enough to just consider the solar capacity available. Effective grid management is essential.”