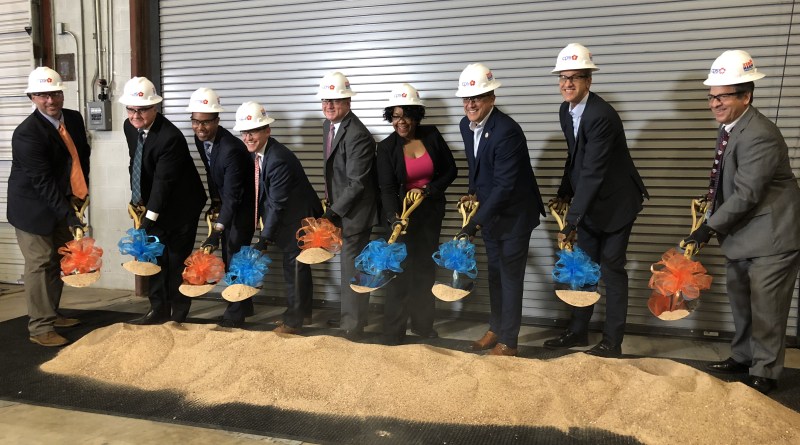 Ground-breaking ceremony for the plant on land provided by the SouthWest Research Institute in San Antonio, Texas.

CPS Energy, a utility serving residents of San Antonio, Texas, has just broken ground on a US$16.3 million project, the first solar-plus-storage install it will own outright.

The utility wants to make solar power generated at the site dispatchable into its networks during the late afternoon and evening peak times. Power generated between midday and 2pm will be stored in the facility’s batteries and injected into the grid as energy demand peaks during the hours of 3pm and 7pm. In August, Energy-Storage.news reported that RES Group will perform construction and turnkey installation duties.

The main provider of natural gas and electricity to San Antonio, CPS Energy held a competitive solicitation process. From 22 competing engineering, procurement and construction (EPC) providers the utility selected UK-headquartered RES Group, which has executed renewables and energy storage projects in territories including the UK, USA and mainland Europe.

RES Americas will construct a 5MW solar PV plant and a 10MW energy storage system, integrated and controlled using the company’s RESolve controls platform, on 50 acres of land provided by the local SouthWest Research Institute. The institute is also participating in the project to investigate the effectiveness of solar-plus-storage and will feed some of its learnings back to CPS. The institute will also likely use the facility as a showcase for the technologies and their integration.

While it’s a fairly small project, it will be RES Group’s first energy storage system delivered in Texas, although the company said it has already completed or has under construction around 3GW of wind and 283MW of solar capacity. Meanwhile, for CPS Energy, it could be one of the first major steps in its so-called ‘Flexible Path’, variously described as a “strategic initiative” and a “full reboot” of how the utility will plan, develop and utilise new energy sources and technologies. As with other regions experiencing growth in renewable and distributed energy resources, the utility wants to be able to keep balancing the system and maintaining its reliability.

Part of the project’s expected US$16.3 million cost will be met by a grant from the Texas Commission on Environmental Equality. The US$3 million New Technology Implementation Grant is given to offset the cost of deploying new technologies that reduce pollutants and improve air quality. The grant is also aimed at helping fund solutions to environmental challenges that may also create new business and industry opportunities in Texas.