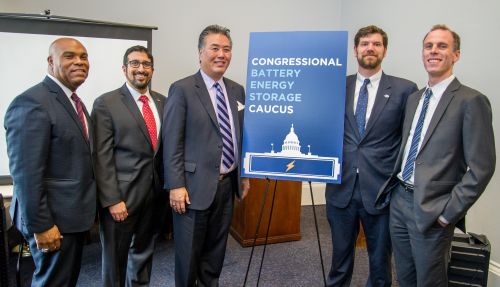 Two Congressional representatives in the US have united across party political lines to form the Advanced Energy Storage Caucus, a group dedicated to educating Members of Congress on the benefits of the nascent technology.

Chris Collins, Representative for New York’s 27th Congressional District, who is a Republican, and Democrat Mark Takano, Representative for California’s 41st District, launched the Caucus last week. The group’s intention will be to “periodically” brief Members of Congress on the ways energy storage is changing the landscape of electricity generation, distribution and consumption, as well as how policy interventions could take away existing barriers to the technology’s use.

A press conference was held last week to launch the Caucus, with Collins and Takano flanked by members of the US Energy Storage Association, executives from energy storage system integrators/vendors AES Energy Storage, S&C Electric and Stem, as well as transmission system operator National Grid.

The Advanced Energy Storage Caucus’ published Mission Statement said the bipartisan group will advance understanding of how energy storage enables homeowners and businesses in the US to have better access to sustainable, reliable and affordable electric power.

“The members of this Caucus will work together and with stakeholders toward innovative and effective policy solutions that address challenges in our energy infrastructure and drive the adoption of storage technology,” the statement concludes.

Congressman Chris Collins said he was “proud” to act as co-chair of the Caucus alongside Rep. Takano.

“We need bipartisan solutions to help address our aging energy infrastructure. Energy storage technology will grow our economy and make sure American businesses can compete around the globe,” Collins said.

“The security and sustainability of our energy infrastructure affects every community across America. I look forward to working with Democrats and Republicans to create a policy environment where the promise of this technology can be fully realised.”

In making supporting comments, S&C Electric’s director of grid solutions Troy Miller pointed out that his company employs 1,200 people in manufacturing jobs in the US and played up the competitive advantages on a national level of supporting the industry.

Previously, in 2015, Collins and Takano were behind the launch of the Congressional Battery Energy Storage Caucus, a similar endeavour aimed at investigating ways to accelerate the commercial deployment of competing energy storage technologies.