Safely managing the use of lithium-ion batteries in energy storage systems (ESS) should be priority number one for the industry. In this exclusive Guest Blog, Johnson Controls' industry relations fellow Alan Elder, with over four decades of experience in the field of gaseous fire suppression systems and Derek Sandahl, product manager for the company's engineered fire suppression products, talk about the best ways to prevent fire incidents stemming from thermal runaway in lithium cells.

Countries around the world have set ambitious goals to reduce global emissions. The resulting investments made in renewable energy sources are driving rapid growth in the Energy Storage System (ESS) industry. In fact, the global energy storage market is expected to grow at 35% compound annual growth rate between 2018 and 2026.

With all their benefits, lithium-ion batteries also have some limitations. Lithium-ion batteries require complex battery management systems (BMS) to ensure they operate within controlled parameters, such as voltages, temperature and charge states, which adjust as the battery cells age. If not managed properly, or the battery suffers from other forms of abuse, it could lead to the risk of battery failure, increasing the risk of thermal runaway and fire.

Industries that depend on lithium-ion batteries need a new, comprehensive solution that effectively detects battery failure and intervenes to help prevent thermal runaway and the fire dangers that follow.

The dangers of thermal runaway

Lithium-ion battery fires are notoriously challenging to fight. Gaseous suppression and water systems simply are not effective. While fire suppression systems can slow fire growth and heat release, they are not sufficient to provide complete extinguishment once thermal runaway has started. The most effective method of extinguishing these types of fires requires large amounts of water applied for many hours or even days. In many locations, especially those that are remote or where water is scarce, this is not desirable or even achievable.

Unfortunately, there have been a number of these fire events in the last few years. In November of 2017, a fire at a Belgium grid-connected lithium-ion battery energy storage site near Brussels resulted in a cloud of toxic fumes that forced thousands of residents to stay at home. In April of 2019, a lithium-ion battery system exploded at an Arizona Public Service site, severely injuring eight firefighters. Following the catastrophe, U.S. energy utilities made safety a key focus. And between 2017 and 2019, there were 28 ESS fires in Korea, resulting in the suspension of 522 ESS facilities.

Understanding the stages of battery failure helps reveal a solution

In order to prevent incidents like these from happening again, it’s critical to understand each stage of battery failure. Divided into prevention and containment regions, there are four stages:

As cell temperatures and pressures rise, flammable gases vent from the cells. This is the critical point at which action must be taken to avoid thermal runaway and a fire event.

Thermal runaway marks the very end of the prevention region and the start of the containment region. Temperatures rapidly rise several hundred degrees and smoke is produced. It is at this point that catastrophic failure is imminent.

Taking a closer look at these four stages reveals the ideal moment when early intervention can prevent thermal runaway. Reaction should ideally occur in the prevention region, but this requires a means of detection in stages one or two. If off-gases can be detected and batteries shut down before thermal runaway can begin, it is possible that fire danger can be averted. 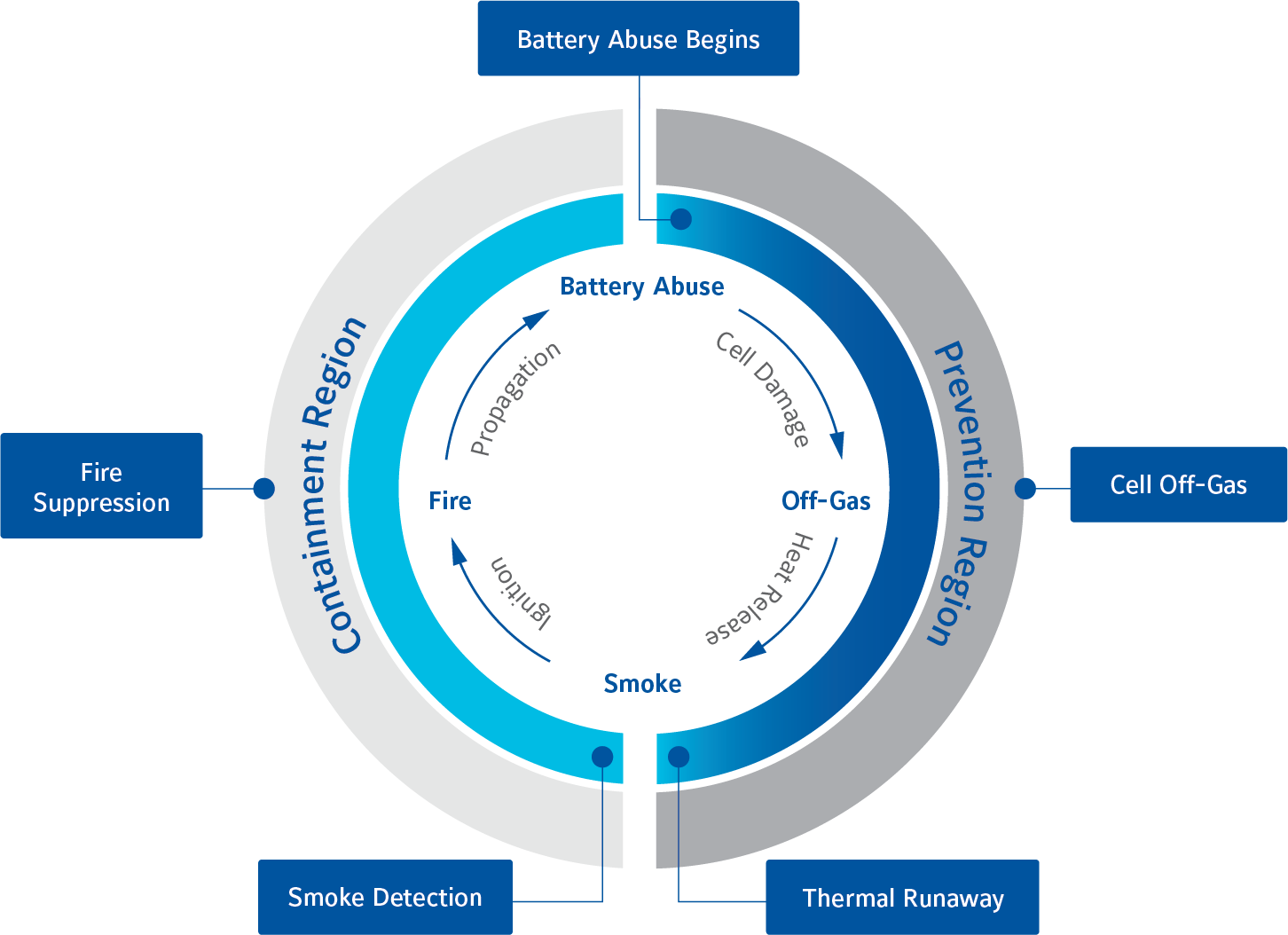 As analysing the four stages of lithium-ion battery failure shows, one of the best early warning signs to detect is the release of off-gases. By definition, an off-gas is the by-product of a chemical process. When lithium-ion batteries begin to fail, the chemical process produces electrolyte vapour from battery cells. This off-gas is produced soon after cell damage occurs and several minutes before thermal runaway starts.

Lithium-ion battery failure eventually produces detectable smoke, too, but only after thermal runaway has already begun. Detecting smoke alone results in a response that is too late. Instead, by detecting the presence of off-gases, affected batteries can be shut down in time to prevent thermal runaway.

This risk prevention system is designed to disconnect batteries and prevent thermal runaway in less than five seconds. However, even after batteries have been shut down, flammable off-gases may still be present. Unless the area is sufficiently large or can be ventilated, these off-gases can still present a fire hazard.

This is where fire detection and suppression come in. If used at inerting concentrations, the fire suppression system can be used to inert the space after off-gases have been released. This can help prevent off-gases from reaching combustion levels in conjunction with oxygen. The point at which an inerting system is released requires careful consideration to be effective and may require integration with other systems.

At regulation design concentrations, the suppression system can be used to help protect batteries from fire sources, such as Class A materials, and other electronic component failures before they become sources of heat that could ignite batteries.

Integrating off-gas detection with fire detection and suppression provides the early intervention required to help keep thermal runaway and fire danger at bay. The system does not require electrical or mechanical contact with battery cells and is essentially an upgrade for existing systems, allowing it to perform in live, working environments.

The number of energy storage systems with lithium-ion batteries is projected to significantly increase over the next five years. Because lithium-ion cells can fail and explode — and often with little warning — it is more critical than ever to detect and prevent thermal runaway before the worst can happen. Combining early off-gas detection with fire detection and suppression or inerting systems provides a holistic solution that delivers the early warning needed to help keep the ESS industry operating safely and sustainably.