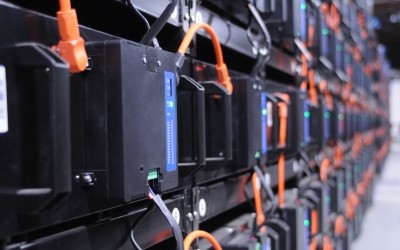 The projects will constitute the largest energy storage rollout in Canada upon completion. Source: Powin Energy

The projects will constitute the largest energy storage rollout in Canada upon completion and are expected to be online by the end of September 2017. They will be split across two sites in Kitchener and Stratford, Ontario.

The projects were all contracted with Independent Electricity System Operator (IESO) as part of its long-term energy plan. The system in Stratford will be housed inside of a newly constructed building specifically designed to support twenty Powin Energy 2MWh battery arrays. At the Kitchener location, six Powin Energy 2MWh 40-foot outdoor battery energy storage products will be deployed.

They are being developed in collaboration with Hecate Energy, a global developer, owner and operator of solar, wind and storage projects.

Hecate selected Powin for the project based on their history on rapid development and speed-to-market utility-scale storage projects, according to Hectate president and CEO Chirs Bullinger. Powin demonstrated this with its 2MW/9MWh Grand Joanna project in Irvine, California as part of the Aliso Canyon energy storage procurement. The project was completed from conception to execution in less than six months.

“Their technology agnostic bp-OS will also enable smooth integration with our top level controls and create a seamless storage system for the IESO,” added Bullinger.

The foundation of this project will be Powin’s modular Stack 140 – which is a modular, purpose-built 140kWh battery array that easily scales up to multiple megawatt applications. All Stack 140 systems are operated by Powin’s proprietary bp-OS battery management software and include the industry-exclusive Battery Odometer and Warranty Tracker.

“We’re proud to have been chosen by Hecate for this project as Ontario is at the forefront of deploying energy storage for frequency regulation, voltage control, and reactive power support,” said Geoffrey Brown, president of Powin Energy. “This will be the largest installation in Powin’s history and – much like our recently commissioned project for Southern California Edison – will be deployed on an extremely aggressive timeline.”

Back in early 2016, Rob Harvey of trade association Energy Storage Ontario, since rebranded as Energy Storage Canada, told Energy-Storage.News that the region's relative success in creating and fostering a market and industry for energy storage owed a lot to policy makers taking a coherent, long-term view of its entire energy sector, with a remit for providing “clean, affordable and reliable” energy to residents and businesses.