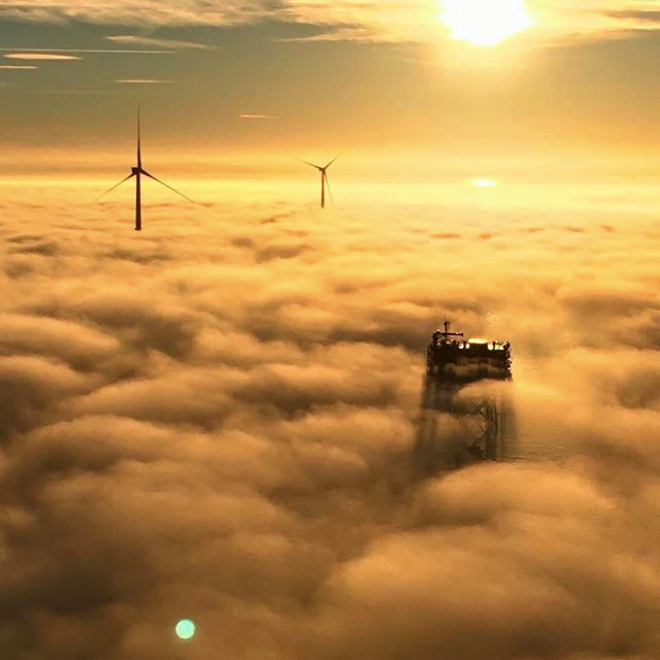 Orsted offshore wind plant. The company is aiming to go coal-free by 2023 and also to source 95% of its heat and power generation from renewables by that time. Image: Orsted / Felix Hellgren.

The CEO of Orsted, the world’s largest offshore wind developer, has said that his company is working to establish “a scalable commercial model” for solar PV and energy storage, viewing both as potential drivers of long-term growth.

Danish power company Orsted, formerly known as DONG Energy until a rebrand and restructuring last year that also included selling off its oil and gas businesses, has just reported its latest quarterly financial results, including reporting for the full 2017 year.

The report and accompanying statements from the company and CEO Henrik Poulsen reiterated Orsted’s commitment to a transition to a low carbon, green and sustainable energy system repeatedly. The company is aiming to go coal-free by 2023 and also to source 95% of its heat and power generation from renewables by that time.

“Our strategy is based on the vision of an integrated green energy system, where renewable energy technologies can be combined with each other and with energy storage solutions, more flexible and intelligent patterns of consumption and electrification of the transport sector, heating systems and industry,” Poulsen said.

The company is rolling out smart meter technologies to customers in Denmark, has recently opened a new biomass facility and introduced consumer tariffs that incentivise green energy production to its electrical grid division, Radius. In environmental terms, group CO2 emissions were at 151 grams CO2 equivalent per kWh generated in 2017, down from 224 in 2016 and from 220 in 2015.

Looking ahead, the company has established a new division to investigate opportunities in solar PV, energy storage and in onshore wind.

“It is early days for these initiatives, and we are still working to establish a scalable commercial model for them,” Poulsen said, however.

Poulsen added therefore that these areas were not “expected to contribute significantly” to group finances in the short-term, but were certainly viewed by Orsted as “long-term growth options”. In terms of strategy, Orsted is keen to create value for projects that developers have started but for financial, scale or capability reasons are unable to “extract the full value” from those projects. The Danish company would acquire these projects and bring them to completion – a strategy that Poulsen said has served the company well in the offshore wind market thus far.

While the offshore wind business is booming, the company has been reluctant to invest further in onshore wind power facilities for the past few years due to the economics being less attractive. Again, the company is revisiting that market. Poulsen also said the company could pursue strategic company acquisitions in various markets, if the opportunities were right.

It is also worth noting that the company appears keen to develop its offering to commercial and industrial (C&I) customers, which it calls ’Energy-as-a-Service’, helping them reduce energy costs and decarbonise. In various markets including the US and the UK, such models have often included energy storage and rooftop solar PV and are not sold to the customer but wrapped into a service contract.