The optimal integration of distributed energy resources such as solar, battery storage and smart thermostats becomes an ever-more complex and pressing question.

Rahul Kar, general manager and VP for New Energy at AutoGrid Systems looks at the role artificial intelligence can play in smarter energy networks. This article first appeared in Volume 23 of Solar Media's quarterly journal, PV Tech Power, in 'Storage & Smart Power', the section of the journal contributed by Energy-Storage.news.

The modern electric grid is an engineering marvel and millions depend on it for reliable and on-demand power supply. The grid is becoming greener with the growing retirement of fossil fuel generation and the penetration of renewable energy, energy storage, electric vehicles (EVs), and a variety of other networked distributed energy resources (DERs). Such growth of DERs will continue at a rapid pace in the near future with rapidly reducing costs, favourable policies and increased customer adoption.

Integrating these DERs optimally — while maintaining grid reliability, delivering value, and maintaining customer preferences — is not an easy problem to solve. Especially considering that conventional methods have failed, simply because of the complexity involved and the need for scale.

Where utilities, grid and energy market operators once had to coordinate 9,000 power plants (and used supercomputers!) in the United States to match demand with supply, in the not-too-distant future, almost every rooftop will have a generating PV system coupled with storage. Coordinating across millions of such distributed systems will be impossible to solve using traditional computational systems.

Enter artificial intelligence (AI) for the modern grid, which uses a combination of three key technical elements to solve this problem: 1. machine learning for recognising patterns to forecast supply and demand; 2. high performance computing for optimisation; and 3. a modern Internet of Things (IoT) infrastructure to monitor and control the connected DERs.

With the right approach, the AI can aggregate all the DERs into a virtual power plant (VPP), that in essence is able to displace conventional sources of generation — thus mitigating harmful emissions and climate change consequences. And with cloud computing, which enables distributing and parallelising computations for forecasting and optimisation, these AI-based systems are cost effective as well.

The power behind trillions of data points

Connected assets — from household thermostats to large grid-connected solar farms — produce data every second on how much energy they consume or generate. There is immense value to the grid if this data is intelligently collected, aggregated, analysed, and enables decision-making by grid operators.

For example, using machine learning algorithms, one can forecast if a transformer will get overloaded or if there will be congestion in a certain part of the grid. Not only is this helpful for long-term grid planning, but it also offers real-time situational visibility alongside control of other DERs to mitigate any power quality issues. 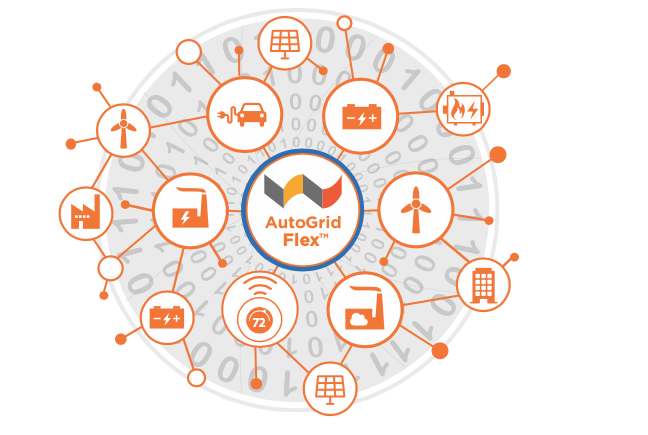 Flexibility is the name of the game. Image: AutoGrid.

Take a typical city street as a simplistic example, where you might find a house with a solar photovoltaic (PV) system and an energy storage asset, a large office building, and a hospital with a backup generation system. Let’s say they are all enrolled in a utility demand response programme. Each building on the street has its own unique energy needs, ranging from the everyday to the critical, different rate tariffs, and varying abilities to moderate energy consumption. Given the capability to predict and control the consumption patterns of each building, would you choose to save on the energy bill for the end consumer or participate in demand response events for the utility and get paid? How about doing both? What is the optimal strategy?

This is not a straightforward problem to solve because the economic optimal control is often not intuitive and rule-based approaches typically fail to scale. Imagine doing this, not just on one street, but for every utility feeder or substation, where many also have DERs like solar contributing to the grid energy mix.

This is where AI is able to handle the complexity and drive scale — load and generation forecasts feed into optimisers that provide outputs on the best way to operate. For example, for the battery in your home, the optimisation ensures that you can not only save on your bill but also make money from demand response incentives.

In the real world, scalability is essential for a comprehensive AI energy application. The modern grid, with an ever-changing pattern of generation and consumption, needs control strategies that account for the specific constraints of each site (for example, not turning off critical backup in a hospital).

At the same time, there is tremendous potential to create enough grid flexibility with control of on-site DERs. In other words, AI unlocks the flexibility of the assets and combines them in such a way that they become a reliable and dispatchable source of capacity for grid use — a virtual power plant (VPP)!

Grid operators can then utilise the aggregated DER portfolio to make decisions — either to delay building expensive infrastructure (non-wires alternatives) or reduce system peak to avoid turning on fossil-fuel based reserves. Complex solutions like wholesale market trading, ancillary services and increasing hosting capacity for renewables may also address this issue.

Cover Image: Many distributed assets are orchestrated to run the grid where once a limited number of centralised, large generators would have done. Image: AutoGrid.

This article first appeared in Volume 23 of Solar Media's quarterly journal, PV Tech Power, in 'Storage & Smart Power', the section of the journal contributed by Energy-Storage.news. You can download the whole book free of charge here, from the PV Tech Store.