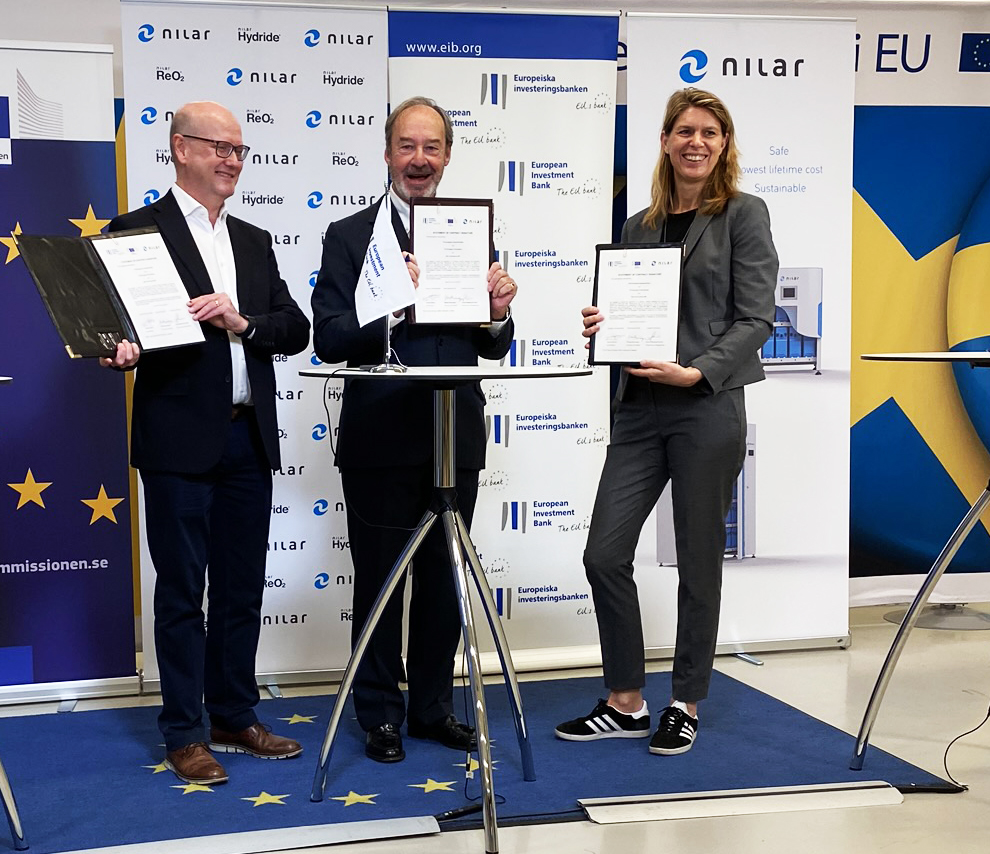 Nilar, a Sweden-headquartered producer of nickel metal hydride chemistry batteries aimed to compete with lithium-ion and lead acid, will receive €47 million (US$55.45 million) in funding from the European Investment Bank (EIB).

The EIB is making the loan to Nilar International with support from the European Commission’s InnovFin Energy Demonstration Projects programme, which is funded by the European Union’s Horizon 2020 budget for innovative technology companies.

Nilar claims its batteries, which feature a bipolar design, are safe and recyclable and suffer less capacity fade over time and usage than other devices. It is also claimed that their production is less energy intensive than lithium-ion. The company integrates the batteries into systems aimed at residential, commercial & industrial and grid-scale or infrastructure markets, focusing on applications including integration and storage of renewable generation, backup power and electric vehicle (EV) charging.

Battery modules are made up of 10 battery cells, including positive and negative electrodes and separator. What makes the devices ‘bi-polar’ in design is that those cells are stacked one on top of the other horizontally with a metal bi-plate between them. According to the company, the advantages of this design include uniform heat generation from uniform current and resistance paths, meaning cells can age uniformly and have longer expected lifetimes.

The company has been developing its products since 2001, implementing its first scalable and automated production line in 2014. It has since begun marketing the nickel metal hydride batteries globally, with R&D and sales centres in Colorado, US in addition to R&D and production centres in Gävle, Sweden and its HQ in Stockholm. Nilar claimed its fully-automated production facilities in Sweden are 100% renewable-powered.

Nilar said the loan and support at European Commission level will help the company to “rapidly commercialise its battery production and achieve further cost reduction through scale,” planning to expand and upgrade its facilities in Gävle with the EIB loan.

“Technologies that were just theory a few years ago are becoming our daily routine. Homeowners will be able to store excess renewable energy and use it later, for example to power their electric vehicles. Research and innovation pays off and is definitely a critical element of our decarbonisation strategy.”

At a signing event held at the beginning of October at the House of Europe in Stockholm, EIB vice-president Thomas Östros noted that the bank was “glad to be able to get behind another Swedish project to further heighten the awareness around new European battery technology,” following EIB loans to help fund Northvolt’s lithium-ion gigafactory plans.

“Nilar’s innovative solution can really make a difference in helping to mainstream the use of renewable energy in our everyday lives. As the EU’s climate bank, we’re happy to support that,”  Östros said.