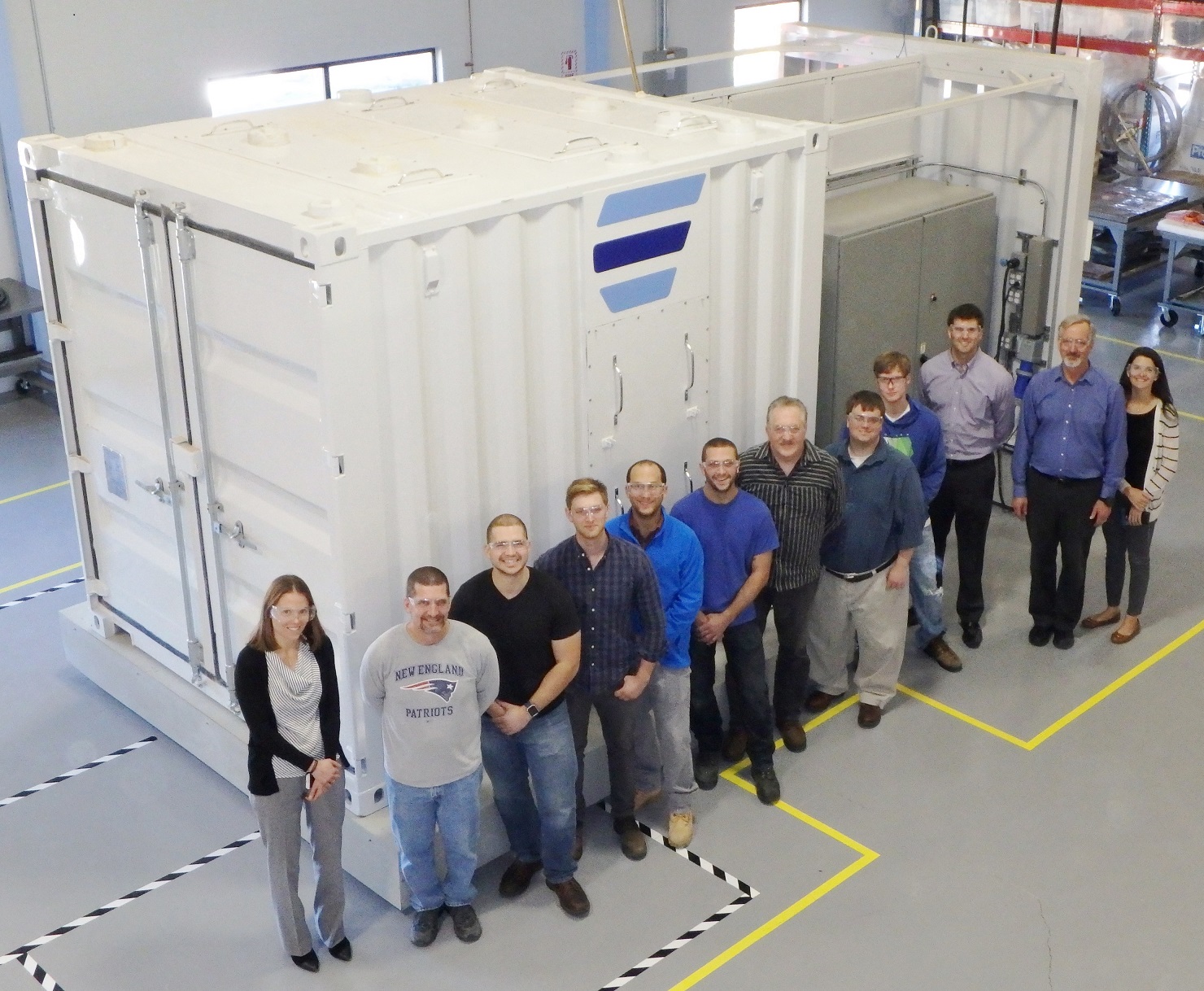 Team at Ambri, photographed in 2016 as the battery claimed a commercialisation and testing milestone. Image: Businesswire.

NEC will be using so-called 'liquid metal' batteries produced by Ambri in projects that could require more than four hours' duration of energy storage, the company announced at SPI / ESI this week.

NEC, via its Energy Solutions system integration business based in Massachusetts, has committed to a minimum purchase of 200MWh of cells from Ambri, with deliveries expected to being this quarter. NEC said that Ambri's battery technology can withstand daily cycling at full depth of discharge.

The pair have signed a joint development agreement (JDA) to design and create energy storage systems (ESS) driven by NEC's AEROS operating system and controls platform. It is anticipated that the ESS could be used to “shift large amounts of renewable energy” as well as peak shaving at grid level. Customers could include utilities, independent power producers (IPPs) and project developers, NEC said.

“Based on our knowledge and testing of Ambri’s technology, we feel this chemistry could be a great answer to the energy industry’s need for a low cost, long life storage solution. Ambri’s technology enables safe and reliable energy storage with potentially the lowest levelized cost of storage in the industry. NEC’s collaboration with Ambri is a great example of our initiative to explore promising future technologies for energy storage solutions,” NEC CEO Steve Fludder said.

Energy-Storage.news spoke with company VP for marketing, Roger Lin, at the show, who said the company is always looking at batteries and related technologies, particularly with a view to assessing which technologies can best deliver services and applications safely at the lowest levelised cost of storage, refering readers back to a contributed piece from the US Electric Power Research Institute that we published a while back, titled “Is that battery cycle worth it? Maximising energy storage lifetime value with advanced controls” (Ben Kaun, Andres Cortes, Sep 2018 for this site and for PV Tech Power).

Ambri's cells use a patented calcium-antimony which are claimed to have an expected 20 year lifetime and go to full depth of discharge with “negligible degradation at significantly lower cost than other battery chemistries”, an NEC press release said.

While we had the opportunity, we also asked about a comment we received from a developer of large projects who said that some utility RFPs for energy storage are now stipulating the use of lithium iron phosphate batteries in grid-scale projects, ostensibly for safety reasons.

“We have seen things like that [in RFPs]”, Lin said.

“I think it's a little misguided. We'd argue that it's not the right approach. Chemistry is one thing. Within lithium-ion there are several chemistries, LFP is one of them. It's known for being more abuse-tolerant. You could poke it harder with a sharper instrument and it won't blow up in yuour face as readily as others, but it still can. It's not to say that it's perfectly safe. We have evidence of industry in certain countries, China for instance, preferring LFP carte-blanche, just because of that reputation.

“Ultimately, safety depends on how it's out together in the system configuration. If you were to burn a gallon of gasoline, it would be a spectacular conflagration, 20-something gallons of gasoline. Yet today, we're allowed to pump our own gasoline, without a permit or a license, just fill up your car and drive away. With gasoline so flammable, you'd expect things to burn down all over the place. But they don't because the system of safety around it and the equipment is designed around that hazard. The same is true for energy storage,” Roger Lin said.

“Different chemistries have different characteristics and it's up to the system integrator to make sure the hazard is packaged in appropriate enclosures.”