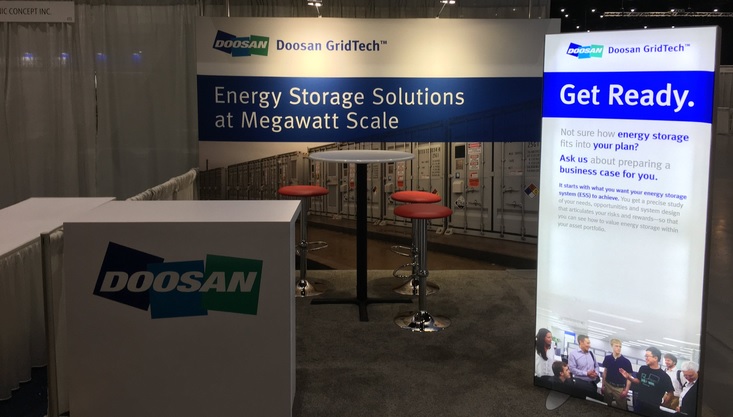 Doosan GridTech, in the frame to build the 20MW facility, was created when Doosan bought up US distributed energy software startup 1Energy. Image: Doosan GridTech Twitter.

An agreement to construct a 20MW lithium-ion battery energy storage system (BESS) has been approved by the Los Angeles Department of Water and Power (LADWP), which would reduce reliance on natural gas generation.

Last week, LADWP’s board of water and power commissioners voted to approve the agreement with Doosan GridTech, which says it primarily executes energy storage projects for utilities to help integrate more renewables on their networks. LADWP serves over four million customers with water and power, making it by some measures the largest municipal utility in the US.

In addition to reducing the usage of natural gas-fired plants, it is hoped that the proposed Beacon Energy Storage System, located near Beacon Solar Plant in the Mojave Desert, will allow better utilisation of the 600MW of solar PV installed in the area, as well as some 135MW of wind generation.

The plant should be completed and connected by March 2018, a date which LADWP brought forward from a 2020 targeted completion date, due to capacity shortfall fears brought to light in the past two years since the Aliso Canyon gas leak which has already led to the fast-tracked development of around 100MWh of energy storage projects by various utilities, developers and system integrators in California.

A presentation on energy storage in LADWP’s service area, its potential and proposed projects including Beacon Ridge said that the project will cost around US$19.2 million, would add flexible reserve and system balancing to the local grid and mitigate for the variable nature of renewable energy generation output.

Beacon Energy Storage System will be connected to Beacon Solar Plant and also to a nearby single-voltage substation, Barren Ridge Switching Station. LADWP said it would be “strategically located to capture and mitigate the variability” of those 600MW of PV and 135MW of wind, most of which are sited in Kern County, a California district hosting a ‘green energy corridor’.

The project will also utilise Barren Ridge Renewable Transmission Project, a 62-mile double-circuit transmission line and associated substation, capable of transporting 1,200MW of power to thousands of homes in LA and completed in late 2016. It will be added to LADWP’s energy storage project portfolio, which at present consists of just one pumped hydro facility – of 1,296MW capacity.

“Instead of curtailing solar, the BESS will use plentiful, low-cost renewable energy to charge up its batteries, and discharge that energy later during periods of higher prices, while lowering emissions by replacing fossil fuel generation,” LADWP assistant general manager of power system engineering, planning and technical services, Reiko Kerr, said.

LADWP mandated to procure another 158MW

California’s main utilities including LADWP have been given mandated targets of capacities of energy storage to procure by the end of December 2020. LADWP’s is the biggest of the municipal utilities’ targets, at 178MW, while investor-owned utilities Southern California Edison (SCE) and Pacific Gas and Electric (PGE) have 580MW targets each while another, San Diego Gas & Electric (SDG&E) has a target of 165MW.

LADWP’s general manager David Wright said that the project would be “an integral part of LADWP’s ability to meet its long-term clean energy goals and mandates and help diversify LADWP’s portfolio of energy storage technologies,” as well as helping keep networks reliable and “keeping electricity rates low for our customers”.

Partly driven by the AB2514 mandate and the Self-Generation Incentive Program (SGIP) scheme, as well as a high penetration of rooftop and ground-mount solar PV, California has raced into a leading position among North American states for energy storage deployment.