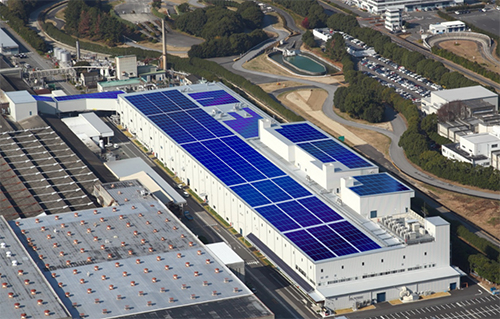 A prospective drawing of the 3MW solar system to be installed alongside the BESS. Image: Mitsubishi

A solar-plus-storage sysem is to power the manufacturing of electric vehicles (EVs) at Mitsubishi Motors Corporation’s (MMC) Okazaki Plant in Japan.

The 1MWh BESS is formed of second-life electric vehicle batteries from MMC’s Outlander plug-in hybrids (PHEV). The system is set to help the Okazaki Plant -one of MMC's main production plants for electric vehicles – reduce its draw from the grid at times of peak demand. A verification test will be conducted on the system in fiscal year 2020.

The global automotive giants are leading the charge when it comes to using second life EV batteries as stationary storage, with several projects announced this year alone. A 1.9MWh system was installed by BELECTRIC for Audi in Germany earlier this year and another German project using second life batteries was announced in October by Groupe Renault. Up to 20MW is to be developed as part of the latter, billed as the largest project of its kind in the country.

Alongside the BESS, 3MW of rooftop solar is to be installed, construction on which began in October. The solar is set to begin operating in May 2020, with an annual power generation of 3GWh. The solar is set to have one of the largest installed capacities for a rooftop PV system without a feed-in tariff in Japan on completion, MMC claims, with plans in place to gradually increase its capacity.

The low carbon technology at the Okazaki Plant is set to not only benefit MMC, however, with plans to use the BESS as a virtual power plant (VPP) in the future, allowing it to contribute to the balancing of the local grid.

MMC is also lauding the BESS’s role in providing power in instances of power outages during times of emergency or disasters. Power can be supplied to the gymnasium at Okazaki Plant, the designated evacuation shelter for Okazaki City.

The lithium-ion batteries used in the PHEVs and subsequently the BESS are manufactured by Lithium Energy Japan Corporation, a joint venture between MMC, Mitsubishi Corporation and GS Yuasa Corporation. The solar modules for the system are being provided by Jinko Solar Japan.

The new installs aren't MMC’s first foray into solar and storage on its own facilities, with showrooms across Japan featuring rooftop solar and Vehicle-to-Building electric vehicle chargers that can feed electricity from an EV back into a building during emergency situations. It also opened a ‘Hyper Energy Station’ in Saitama City in 2018 with 12kWh of lithium-ion battery storage.