Mercom: VCs invested US$480 million in battery energy storage in first half of 2017 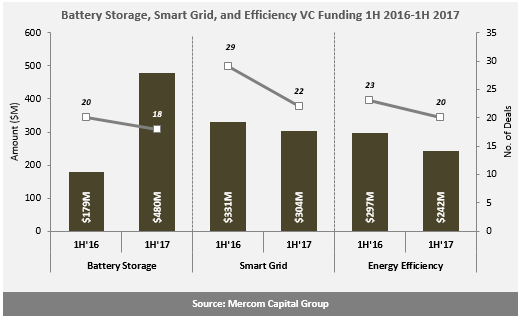 The amount of energy storage investment that came from VC (venture capital) funding more than doubled in the first half of 2017 compared to last year, a new report has found.

Mercom Capital has just published the latest in its quarterly series of funding and mergers and acquisition (M&A) reports, covering the battery energy storage, smart grid and energy efficiency sectors.

VCs in the first six months of this year put nearly half a billion dollars (US$480 million) into energy storage companies, smashing the US$179 million figure raised in the first half of 2016. The average deal size appears to have jumped significantly too – the H1 2017 figure came from 18 deals in total, while the H1 2016 figure was actually from a larger pool of 20 deals.

Similarly, Q2 2017 showed a huge increase in VC funding from the first quarter of the year. An enormous US$422 million came from 10 deals. By contrast, Q1 saw just US$58 million pumped into eight deals.

Meanwhile, the previous edition of Mercom’s report in the first quarter of this year highlighted that flow batteries had been the chief recipient of VC funding among battery energy storage technologies. This was mainly due to US$32 million raised by manufacturer Primus Power. This time around, Mercom said funding was split broadly between four technologies: flow batteries, whole energy storage systems, lithium batteries and zinc-air batteries.

By far the biggest winner in that VC market this time around was Microvast Power Systems, which makes lithium-ion batteries for electric vehicles (EVs) and netted a massive US$400 million back in April, therefore dominating in total investment for the quarter. According to Microvast, that VC funding deal was led by Chinese investment bank CITIC Securities. In a distant second place for Q2 2017 VC investment was VionX, maker of an ‘all-iron’ flow battery – netting US$12.75 million.

Third place went to the UK’s Moixa Technology, which makes residential energy storage systems with grid-balancing capabilities and recently got US$500,000 investment from Japanese utility and grid company TEPCO. Moixa got US$3.2 million in VC cash in Q2 2017.

Debt and public market financing also increased significantly from the first quarter of this year; US$107 million was spent across seven deals in Q2, while Q1 had seen just US$22 million spent across two deals, Mercom found.

The only area reported on by the firm which saw a considerable drop in activity and in financial sums invested this past quarter appears to be project financing for battery energy storage. At the end of 2016 Mercom reported that total project funding in the sector added up to a mammoth US$820 million for the whole year. Looking at the first half of 2017, only US$152 million was raised, in a single deal, by Canadian energy storage developer and system owner NRStor.

Having said that, the first half of 2016 only saw US$195 million in project funding for battery energy storage, in three deals, before a handful of large deals in the second half of the year picked up the slack as Advanced Microgrid Solutions and Tabuchi America netted US$200 million and US$300 million respectively. 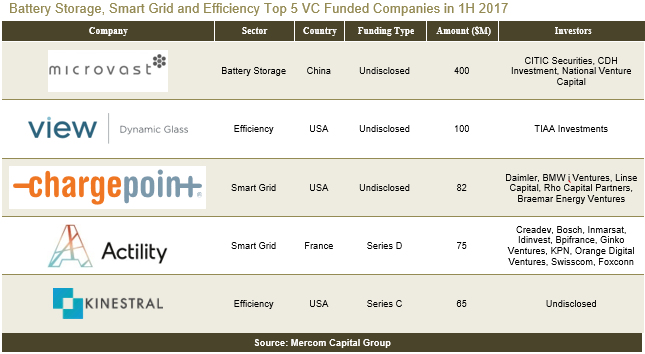