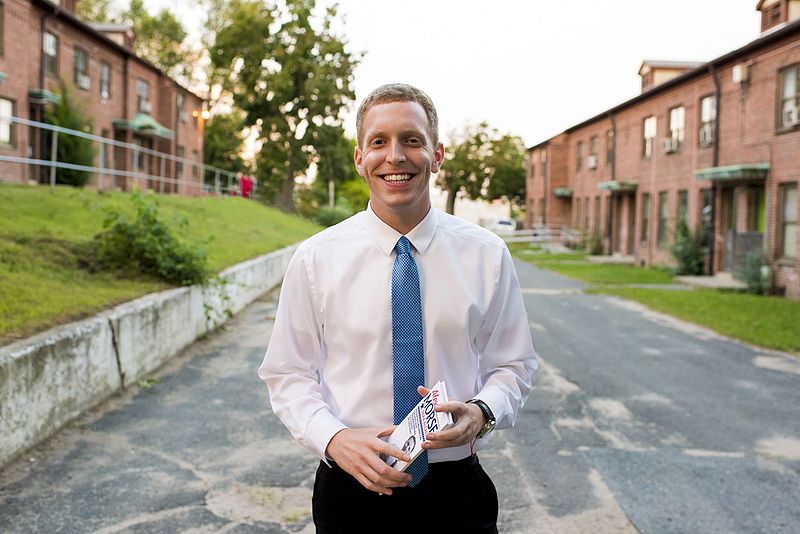 Holyoke Mayor Alex Morse, who said the system could be the first of many. Before the coal plant’s retirement at Mt Tom it was the last coal-fired power station in operation in Western Massachusetts. Image: wikimedia user: abmorse

The largest grid-connected energy storage system in Massachusetts will be used to determine the value of the technology throughout the US Commonwealth territory, supported by a Department of Energy Resources (DOER) grant.

DOER contributed US$475,000 to the project, which will see a 3MW / 6MWh energy storage system co-located with the existing 5.76MW-DC Mt Tom Solar Farm, built adjacent to a former coal-powered thermal generation plant. The DOER funding comes as part of the Massachusetts Peak Demand Management Programme, a US$4.68 million scheme. As much as 40% of the Commonwealth’s electricity costs come from the 10 hours of the year when demand is at its highest.

The peak demand reduction value of the system will be assessed by the University of Massachusetts Amherst, taking into account equipment value, potential for cost reductions and data collected throughout the life of the project. Recommendations for future best practice are expected to be forthcoming from the project’s analysis team.

The project is being executed by Silicon Valley commercial energy storage provider Green Charge, which is 80%-owned by Engie North America, a subsidiary of the European major utility. Green Charge expects to complete the project by April next year, in time for Massachusetts’ summer peak periods.

The Mt Tom energy storage system is being delivered for municipal utility company Holyoke Gas & Electric (HG&E), which is also responsible for transmission and distribution services for its service area. With about 18,000 electric customers, HG&E experiences annual peak loads of 75MW.

Engie and HG&E announced the energy storage system’s construction yesterday, but declined to give many technical details, although it is fair to say it is very likely to use lithium batteries, as with Green Charge’s other projects to date. It will certainly be using GridSynergy, Green Charge’s software platform for monitoring, optimising and control, Engie said.

In addition to optimising the integration of solar PV onto HG&E’s networks and reducing stress on the utility’s distribution grid, the energy storage system should contribute to stabilising energy costs for electric ratepayers over a 20-year period, while improving power reliability and stability.

Massachusetts is one of the US states, regions or Commonwealths to have taken a lead on energy storage policy. A 200MWh procurement target for electric distribution companies has been set, to be deployed by the beginning of 2020. However this target is described as “aspirational”. Another commercial energy storage provider, Stem, commented at the time the target was set in July that while it was encouraging to see Massachusetts and its Governor, Charlie Baker, make that first step, company policy director Ted Ko said it was disappointing to see the target was non-binding nor compulsory.

Speaking on the Mt Tom project, Charlie Baker said that: “Massachusetts is proud to be a national leader in energy efficiency programs that reduce overall consumption and we are committed to continuing our work to improve energy costs disproportionately affected by times of peak demand.”

“The demonstration projects funded through these grants will strengthen our innovation economy and provide the Commonwealth with a roadmap for reducing our most expensive energy loads and securing our energy future.”

“Solar and energy storage are keys to a low-carbon, low-cost energy future and HG&E is taking the lead by moving forward proactively to deploy what we see as the future for the energy industry,” Engie North America chief Frank Demaille said.

Holyoke Mayor Alex Morse said Mt Tom would be the “first of many storage projects that help us advance our environmental stewardship objectives”.