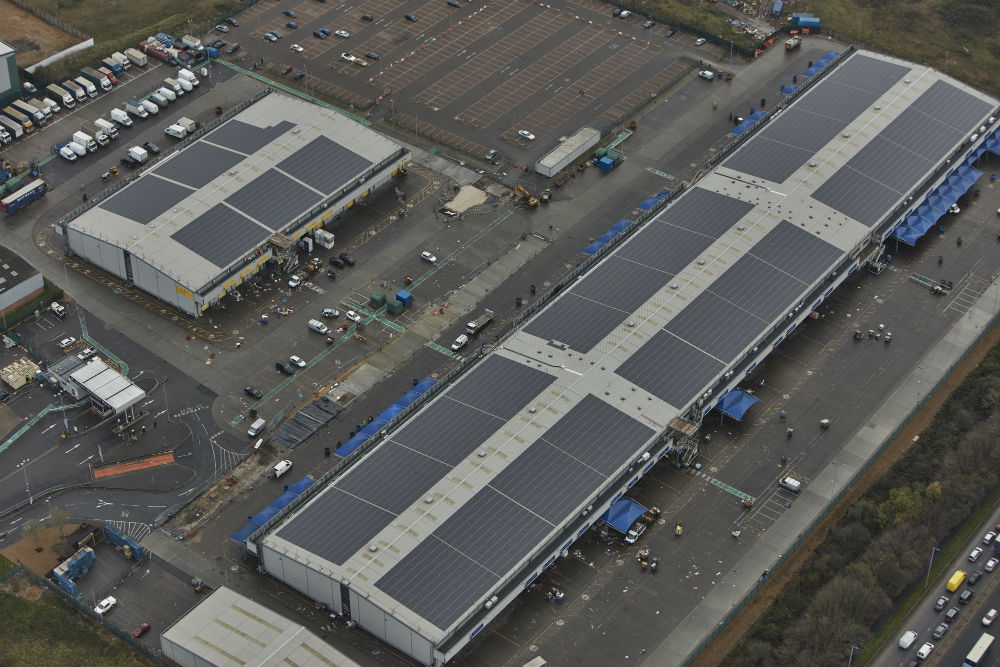 A recent commercial project in the UK to which Tesvolt supplied energy storage. Image: Tesvolt.

The UK’s government has shied away from supporting large volumes of solar and other distributed energy technologies through subsidies, but commercial and industrial energy storage and solar-plus-storage could be a huge market opportunity in Britain and abroad.

This morning, on the opening day of the annual Solar and Storage Live exhibition and conference in Birmingham, England, Lord Deben, Chairman of the government’s own Committee on Climate Change launched a scathing attack on the current administration’s lack of ambition on the issue of climate change and supporting decarbonisation.

However, the solar industry pushes on nonetheless, albeit in a diminished form from the days of feed-in tariffs (FiTs) and other incentive schemes and programmes such as the Renewable Obligation Certificates (ROCs) for larger-scale wind and solar. However, energy storage is now bringing economic viability to various types of distributed energy solution.

Energy-Storage.news heard from various sources at the show that in many cases, commercial and industrial (C&I) energy storage, including storage paired with solar, can help bring businesses’ energy costs down to the point where it is virtually a no-brainer to install batteries, despite an initial high level of capital expenditure being required.

Energy-Storage.news spoke with Juan Carlos Ordonez, managing director of Cegasa, a Spanish manufacturer and supplier of lithium batteries. Cegasa had just that day signed a deal to supply Wattstor, a UK energy management and storage system maker, with batteries for UK projects ranging in capacity from 50kW to ‘just under’ 1MW.

“Lithium for commercial and consumer applications is there [at the point of economic viability already]. The penetration of lithium is 100% you don’t have any computer or mobile phone that doesn’t have lithium. In industrial markets we think that it’s moving fast, [albeit] with different stages.”

Even when factoring in the cost of ventilation equipment, installation and connection of batteries and other metrics, lithium could reach adoption rates of 80% eventually, Ordonez predicted.

“It’s true that penetration of lithium today in industrial systems is about 3-6% but the potential of the market is really, really huge,” Ordanez said, adding that in general, most of Cegasa’s projects in the commercial space involve replacing lead acid batteries with lithium in legacy projects.

“We’re doing a lot of healthcare sector work,” Jones said. “Not so much about return on investment but security of supply – at dental practices for example. Going forward, there will also be new legislation in the UK about diesel. you won’t be able to power up a diesel generator within a certain distance of houses. Most UK hospitals have diesel generators under the ground in the event of a power cut, so what will they do, for example?”

Energy-Storage.news had the opportunity to meet with UK partners of German storage system maker Tesvolt, including MSP Technology, which executes projects for commercial customers in territories including Africa and Asia and Sundial Solar Solutions, an installer for UK homes and businesses. Both have selected Tesvolt’s battery technology, based around Samsung SDI prismatic lithium nickel manganese cobalt oxide cells (lithium NMC) cells, with close monitoring of each battery module and cell built into their complete system solutions.

Derrick McCormick of Sundial, said he was supplying Tesvolt battery systems to a new development of 56 commercial units in the south west of England. While the customer for that project is an enthusiastic adopter of renewables, the deployment of solar-plus-storage at the sites is as much a business decision as an ideological or idealistic one. The owner, McCormick said, wants to keep energy costs as low as possible for the startup companies he is hoping to attract to occupy those units.

“Producing our own power, we can sell it to occupants of the units cheaper than they can buy from the grid,” McCormick said.