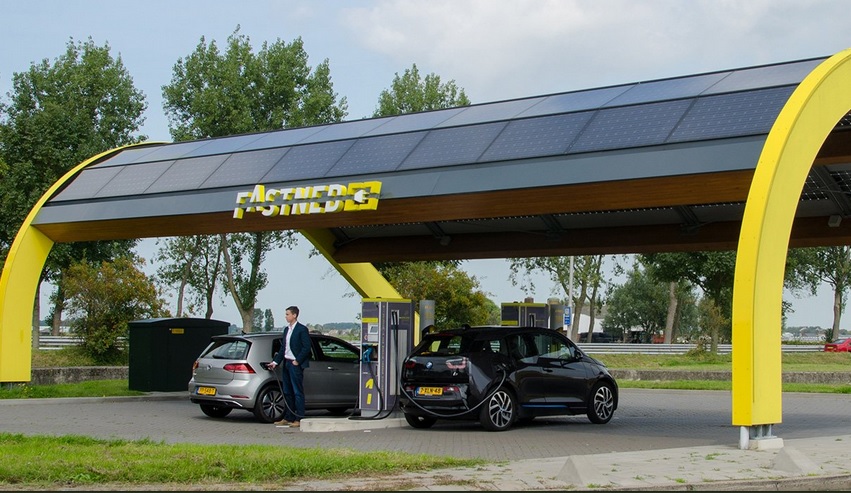 Fastned charging station in the Netherlands. Image: Fastned via Twitter.

Energy storage battery and system maker Leclanché will pilot the use of stationary energy storage to support fast charger networks for electric vehicles (EVs) in Holland.

The Swiss company has signed a deal with EV charging equipment manufacturer Fastned, which has installed over 60 charging stations in the Netherlands that promise a full charge in 20 minutes. Fastned wants to expand its network across Europe, with Germany its next targeted territory for a consumer network, having received a €4.1 million (US$4.92 million) subsidy for the building of 25 fast chargers from that country’s government. Meanwhile the company already has an agreement in place with Transport for London to partner development of the London Underground operator’s 300 planned fast charging points, by 2020.

Leclanché is developing battery energy storage for the chargers, with an initial pilot programme to be deployed at two charging stations. Leclanché will install large-format lithium-ion batteries in battery energy storage systems (BESS) for the sites, reducing strain on the grid while allowing multiple Fastned network users to fast charge simultaneously. The batteries will act as a buffer between the EVs charging and power being drawn from or put onto the grid. In August, a similar project was unveiled in the UK, where Connected Energy is using second life batteries from Renault to offer fast charging in regions with costly connection charges.

Additionally, Fastned will be able to use the electricity generated from rooftop solar PV in the batteries, while Leclanché says the units will also be recharged at off-peak times, resulting in cost savings and reducing grid strain.

Among energy storage manufacturers, Leclanché is one of those pushing into the transportation and e-mobility spaces aggressively. In addition to several deals with EV charger networks providers, the company has recently also begun supplying battery systems to the electric bus market, on which Leclanché CEO Anil Srivastava recently blogged for Energy-Storage.News.

In a recent note, City of London investment bank Cantor Fitzgerald agreed with Leclanché’s view that the company is currently recovering well from a period of “underperformance” and could attain profitability by 2019.