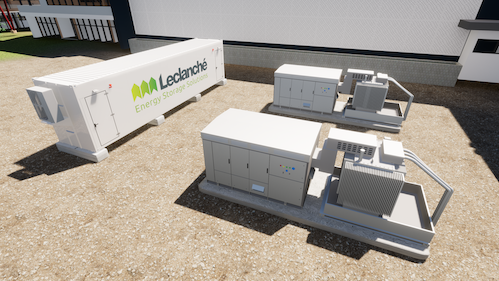 Rendering of how the project will look with containerised battery system on the left and two power conversion units on the right. Image: Leclanché

The Switzerland-headquartered lithium-ion energy storage solutions company said yesterday that it has been selected for a project which will support frequency regulation of the grid, by ENERGODATA, a Slovakian IT company which also provides grid services.

A 5.2MW / 2.9MWh energy storage system will be installed in the internal medium voltage grid of the natural gas plant, which is owned by French transnational utility company Veolia. Owing to changing European regulations for secondary reserve frequency control of the grid, the plant will be required to halve the time it takes to reach full power on request from the transmission system operator (TSO), from seven and a half minutes to 15 minutes.

Leclanché claimed it is the first time battery storage tech is being used to support a gas turbine in providing secondary frequency regulation. It is also thought to be the largest battery storage project in Slovakia so far: another energy technology company, Fuergy, which is headquartered in the country claimed a 432kWh battery storage system that it announced as online in September was at the time the biggest. That project helps lower peak demand at an industrial building using Fuergy’s AI-powered software.

“This is a further contribution to stabilising the European grid and helping to integrate more and more renewable production.”

In a recent interview, analysts at consultancy group Clean Horizon picked out the secondary reserve market as a likely source of opportunity for battery storage to play a role in balancing the energy system and net revenues in a number of European countries.

The Leclanché project is scheduled to come online and be fully operational by the fourth quarter of 2021, shortly before the new European automatic frequency restoration reserve (aFRR) requirements come into effect on 1 January 2022. Client ENERGODATA is working with local engineering, procurement and construction (EPC) partner TESLA Blue Planet (no relation to the Fremont-headquartered company). ENERGODATA’s own controls system will allow the battery and Leclanché energy management software to interface with the TSO.

In mid-2020, Leclanché said that the company is undergoing a strategic restructuring process and aimed to reinvent itself as a “green tech software and systems integration company”. A few months later in September the company announced the completion of another novel energy storage project, a flywheel-lithium battery hybrid system combining 8.8MW / 7.12MWh of lithium-ion batteries with six flywheels adding up to 3MW of power to provide frequency stabilising primary control power to the transmission grid operated by TenneT in the Netherlands. In December, the company said it had broken ground on a US$70 million microgrid project including a 14.8MW / 45.5MWh lithium battery system and 14MW of solar PV on the Caribbean island nation of St Kitts and Nevis.