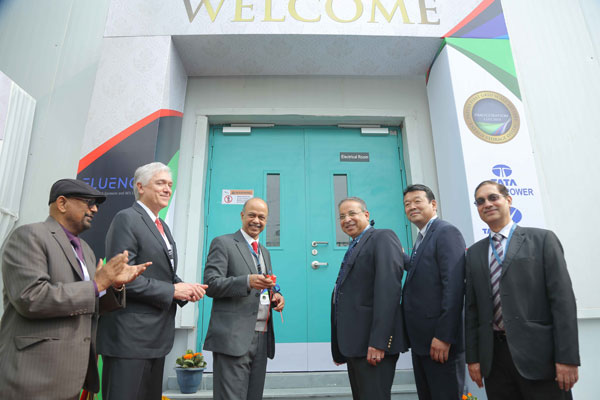 Executives of the project’s partners today at the inauguration. “As South Asia’s largest grid-scale energy storage system, we are confident that it will play a key role in enhancing the flexibility and reliability of India’s power grid”: Tsunehiro Makabe, General Manager of Mitsubishi Corporation’s Environmental Energy Business Department. Image: Tata Power.

An inauguration event was held for the 10MW / 10MWh system today, 13 February, at the site in Rohini, Delhi. It is located at a substation owned by Tata Power Distribution, the grids and networks business of India’s mammoth Tata Group. Owned and operated by AES Corporation and Mitsubishi Corporation, which have jointly delivered the project, the system will help provide flexibility to the local grid.

Tata Power DDL has over 2 million customers, and the Discom’s (distribution company) CEO Sanjay Banga said that: “This, India’s first grid-scale battery-based storage system, will address our key challenges in the areas of peak load management, system flexibility, frequency regulation and reliability of the network.”

“At Tata Power-DDL, we continually strive to integrate new technologies for strengthening our network to provide reliable and quality power supply to our consumers,” Banga said.

Fluence, the technology provider joint venture (JV) formed by AES together with engineering company Siemens, supplied the battery system itself, based on the Advancion lithium-ion battery storage platform originally developed through the AES parent company ahead of the JV’s independent launch last year.

The project marks a first step forward for energy storage in a country which has an enormous target to reach 225GW renewable energy generation by 2022. By 2027 the network could also require 46GW of peaking capacity, typically the most polluting and expensive energy in the grid in nearly all parts of the world. The Rohini project is set to be a pathfinder for India, to demonstrate how battery storage can help reduce the ramping capacity needed to fire up fossil fuel plants, help integrate renewables by smoothing their output to the grid and in general provide critical flexibility to the grid.

As solar on the grid increases in India, thermal power plants will start to be shut off during the day. As the power contributed by solar wanes with the sun in the evening, there can be the potential for a shortfall of energy as evening peak demand occurs. Using battery storage has the potential to greatly mitigate the need for thermal power plants to ramp up, or even to be there at all. At present this need is resulting in 57GW of ramping requirements over 6 hours each night in India.

A paper presented to Energy-Storage.news by Fluence today argued that energy storage can deliver “twice as much flexibility as any other electric power asset because it can both deliver and absorb power from the network, acting as a buffer to the intermittency of renewables and eliminating the need for wasteful curtailment [of renewable energy]. Storage can be sited anywhere in the network including densely populated load centers and rural areas on the edges of the network. It has no direct emissions or water use. This project is a first step for widespread deployment of energy storage in India.”

Read the India Energy Storage Alliance executive director Dr Rahul Walawalkar's thoughts on what 2019 will bring for energy storage in India in areas including gigafactory-scale manufacturing and clarity on renewable energy policies.