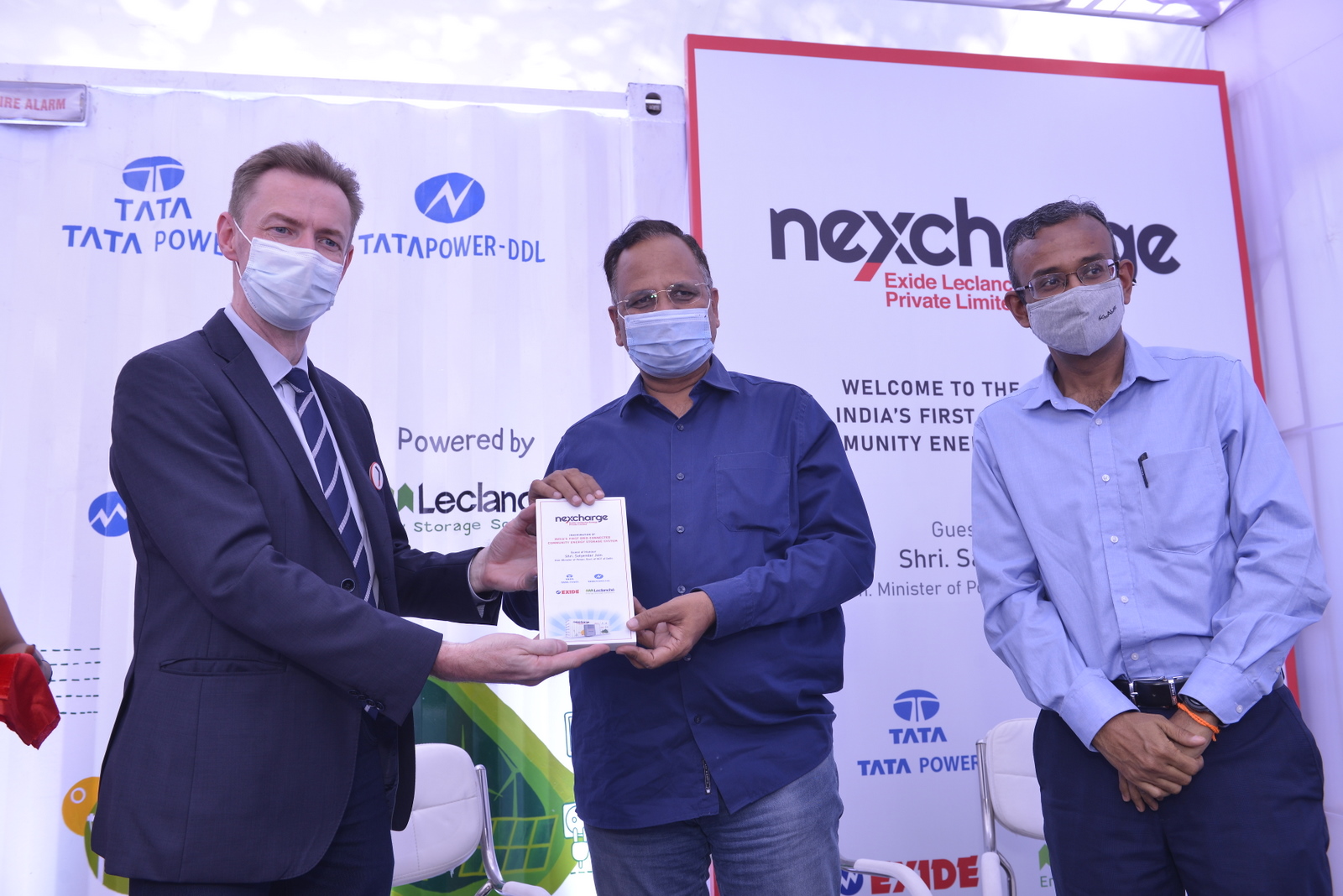 A lithium-ion battery energy storage system that has been switched on in Rani Bagh, Delhi, will serve multiple applications and could pave the way for adoption of smarter energy networks based on renewable energy across India.

The battery system is relatively small by the standards of some of the grid-scale systems that are starting to be deployed worldwide, but nonetheless provides valuable services to the local electricity grid and community. Described as India’s first grid-connected community energy storage system, it could also help prove the case for wider rollout of similar solutions across India, the companies behind the project have said.

Delhi’s Minister of Power, Satyender Jain, who attended the inauguration of the 150kWh / 528KWh battery storage system, said via Twitter that long-term, the technology used at the “first-of-its-kind” battery storage system “will benefit the environment & us”, with its crucial roles including aiding “power supply during electricity discharge due to peak load” in Delhi’s summer months, June and July.

Local power distribution company, Tata Power-DDL, which is a joint venture (JV) owned by engineering and power company Tata Power and the Government of Delhi (Tata owns a 51% majority stake), serves around 7 million customers in the north of the state. The newly-inaugurated project is based at one of Tata Power-DDL’s substations, in a densely populated area which is seeing electrical load growth rise quickly, leading to concerns over stability and adequacy of electricity supply.

The new battery system has been installed as a collaboration project between the distribution company (Discom), and lithium-ion battery and storage system company Nexcharge, which itself is a JV, formed by battery companies Exide from India and Switzerland’s Leclanche. While Exide is widely known in India for its lead acid batteries, Leclanche is known in Europe and elsewhere for its work with lithium-ion and the Nexcharge JV focuses on lithium-ion batteries of different types and integrating them into transport and other sectors like renewables.

“Battery-based energy storage (BESS) provides the agility to better integrate intermittent solar and wind energy resources into India’s electric grid and ensure high-quality power for consumers. A community energy storage system like this will ensure consumers get to experience better levels of stability, reliability, quality, and control. Both customers and distributors will benefit from this service,” Nexcharge’s CEO and CTO Stefan Louis said.

“We are very happy to partner with Tata Power DDL to set up this new 0.52MWh grid-connected system which will pave a new path for wider adoption of grid-scale energy storage technology across India. It’s another step towards all Indians accessing smart sources of energy.”

The community energy storage system can also assist the local network in the event of power outages and equipment failures. It can provide black start function to power equipment, helping it to back online quickly and without the need for external generators like diesel engines. It will also provide up to four hours of backup power at 150kW to local services providers including hospitals and commercial complexes, as well as hundreds of local residential electricity customers.

“This [project] will further strengthen our network and ensure reliable and quality power supply to our consumers at all times. Instead of building humungous infrastructure of transformers and electric equipment community energy storage systems can be used to meet peak demand while storing surplus power,” Ganesh Srinivasan, Tata Power-DDL’s CEO said.

“I believe wider adoption of such storage systems will help in balancing the load curve of discoms and make them future-ready.”

India has ambitious goals on renewable energy deployment, targeting the installation of 225GW by 2022 and some experts have estimated the grid could require 46GW of peaking capacity by 2027. Panel discussion held by the India Energy Storage Alliance (IESA) late last year heard how energy storage could solve problems of reliability for grid operators, such as a blackout which struck Mumbai in October. The country only got its first grid-scale advanced lithium-ion battery storage system in 2019, a 10MW / 10MWh system also deployed on Tata Power DDL’s networks in Delhi. That project, by AES and Mitsubishi with energy storage technology and integration services provider Fluence, kicked off the process of investigating the optimal deployment of energy storage for the distribution company’s 2,000MW electricity network.

More recently, there have been large tenders for renewable energy capacity paired with energy storage in various parts of the country, with the state-owned Solar Energy Corporation of India (SECI) and the government Ministry of New and Renewable Energy (MNRE) leading those efforts, but the newly inaugurated Nexcharge project is thought to be the first attempt to support infrastructure at the distribution level while directly providing backup power capabilities to the local community. 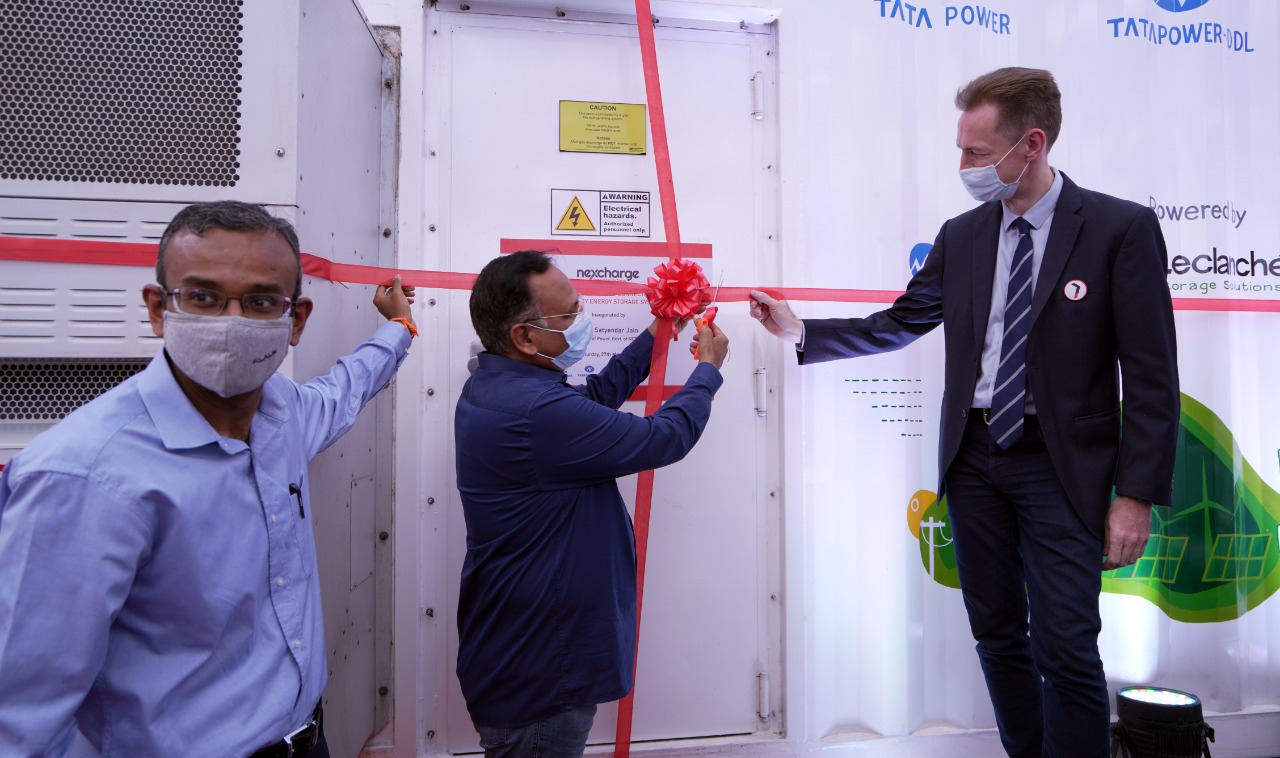