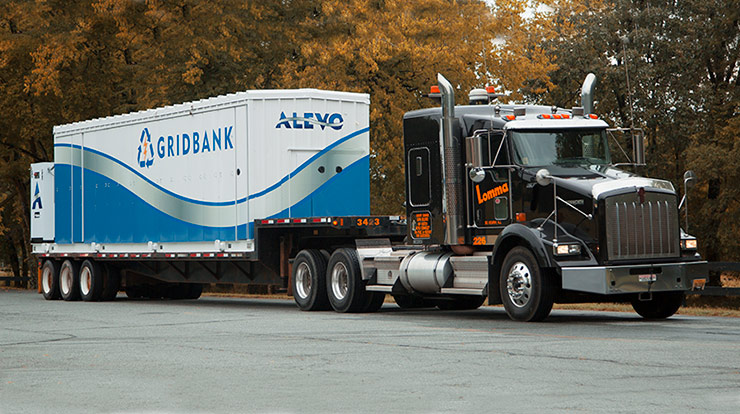 The first 2MW GridBank unit was only shipped in January. Image: Alevo.

Alevo, a US energy storage provider which only started shipping its containerised solutions in January, has filed for Chapter 11 bankruptcy protection.

The company had launched GridBank, a battery-based energy storage solution with an estimated 20-year duty cycle, at the beginning of this year, following a series of validation and application tests with motion and control technology specialist Parker Hannifin’s Energy Grid-Tie division.

The first 2MW unit was shipped in January for use in the PJM frequency regulation market, with Alevo touting the unit’s low cost and safety and performance features.

However, as of Friday (18 August), the Alevo website has been replaced with a landing page announcing: “Alevo USA, Inc. and Alevo Manufacturing, Inc. file for relief under Chapter 11”.

The statement that follows explains that the Chapter 11 was filed with the United States Bankruptcy Court for the Middle District of North Carolina on Friday. Alevo said that it wanted to use the bankruptcy supervision to “achieve an orderly liquidation of assets” and maximise “value to pay their creditors”.

According to Alevo, the company had developed “groundbreaking battery technology”, previous claiming that GridBank came with the lowest cost of ownership over the lifetime of the asset versus rival lithium-ion energy storage systems.

Yet “significant production challenges” meant the company was unable to raise sufficient revenues to stay in business, the statement said. Despite efforts to find new sources of money, enough funding could not be found in time to keep Alevo ticking over and in business.

“This decision was driven by the formidable challenges of bringing a new technology into commercial production and lacking the financial wherewithal to continue on through repeated manufacturing delays,” Heintzelman said.

“It is a sad day for our dedicated employees and partners, as well as for the promise of Alevo’s technology.”

Some other technology providers, particularly those with new energy storage technologies, have struggled to commercialise and similarly fallen into trouble in the past couple of years, although perhaps it has not been the competitive ‘bloodbath’ of consolidation that some have predicted – yet.

Earlier this year “saltwater battery” manufacturer Aquion Energy similarly ran out of cash just before spring and filed for Chapter 11 protection, before re-emerging under new ownership a month ago. Silicon Valley-headquartered Imergy, a flow battery manufacturer that was planning to supply hundreds of microgrids in India with (now-also bankrupt) developer SunEdison had to close its doors in August 2016.