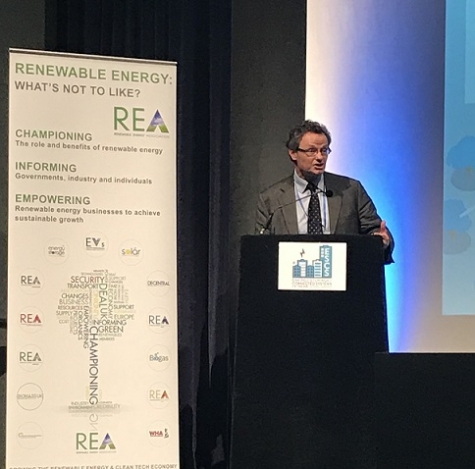 “Time is very much of the essence and we need to put the right policy framework in place without delay,” Peter Aldous MP, chair of the APPG on energy storage.

The UK's government must “take the brakes off” the progress of energy storage by implementing the right policy framework without delay, according to Members of Parliament (MPs) from across the political spectrum.

Speaking at Energy Storage and Connected Systems, an event hosted last week in London by the national Renewable Energy Association (REA), shadow minister for energy and climate change Alan Whitehead claimed current energy legislation was now “obsolete” in the face of the changes underway in the sector.

The treatment of energy storage was held up as an example, with Whitehead stating that the technology was unlike anything that had come before it.

Whitehead has been enthusiastic about the potential of batteries in the past, as far back as 2014 referring to electricity storage as a technology that could help secure the resilience of the network.

Playing a different role to generation

Currently the technology is legislatively classed as generation, with Ofgem proposing in November to amend the existing electricity generation licence to clarify the regulatory framework for storage.

While judging that the creation of a similar but separate licence for storage “would add unnecessary confusion” due to the characteristics shared by storage and existing generation, Ofgem has said it will adopt the Electricity Storage Network’s definition of the technology in legislation.

However, industry has continued to press for a more specialised response to the situation, with REA chief executive Nina Skorupska last week pointing out: “It plays a different role [to generation]…We need to have a very clear definition of how that can be accounted for without ambiguity.”

The issue is also thought to have delayed further investment in the UK storage sector according to Louis Shaffer, distributed energy segment manager EMEA for Eaton, who said financiers were holding back.

“The finance people are dying to get into these markets, this is the future and they know these are good investments. The issue is today they don't have viability on long-term profit or even medium-term profit. It's very challenging and really that comes down to do we have regulation in place?

“The definition of storage is a great example. What we want to see is more thought out policy,” he said.

Time is running out

Whitehead also warned that with a packed legislative schedule for government, time is running out to ensure the right policies are in place to support the low carbon energy transition.

“What I want to emphasise, which I think is still less than fully looked at, is just what we are going to have to do in Parliament in government over the next period to actually make sure the legislational and regulatory arrangements we've got support the new transition rather than impede it.

“That is quite a pressing imperative because we haven't really got much time to go before we have to take some very big decisions about where our energy systems go,” he said.

Progress was also called for by Conservative MPs in attendance, with the chair of the All-Party Parliamentary Group for energy storage Peter Aldous echoing Whitehead’s comments.

“Energy storage is on the cusp of historical global industrial change, it's no longer a pipedream. With the right combination of progressive policy and private sector innovation we can be global leaders in this new future. However time is very much of the essence and we need to put the right policy framework in place without delay,” he said.

July 28, 2022
Another edition of our news in brief from the energy storage industry focusing on the bustling UK market.