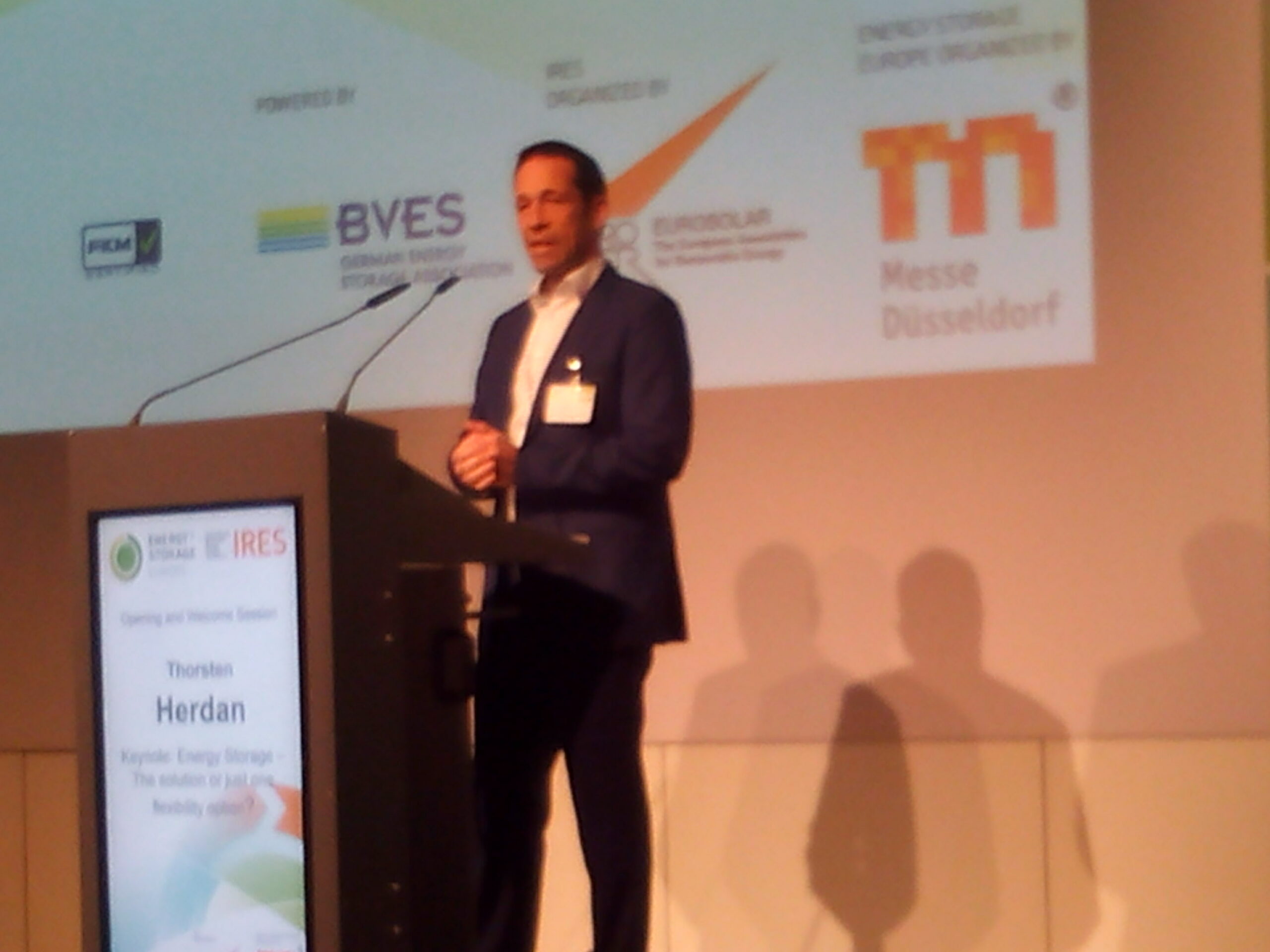 At this week’s Energy Storage Europe event, Energy-Storage.News heard from German politician Thorsten Herdan that strong cooperation with other countries in Europe is vital for creating smarter, reliable and cost-effective energy networks.

Herdan, a Director General of Energy Policy at the Federal Ministry for Economic Affairs and Energy, was one of the keynote speakers on the first day of the trade exhibition and conference, held in Dusseldorf from Tuesday morning. In his speech, Herdan, who later said he had 21 years experience in the energy industry prior to a move into politics, said that over the past couple of years he had become increasingly interested in “technological enablers” for decarbonisation and grid modernisation.

With energy storage still an early stage market, Herdan said he feels many questions still remain unanswered, despite the rapidly maturing technologies available. To this effect, his ministry is planning to increase funding for R&D, and still sees decarbonisation in terms of renewables, rather than with nuclear.

The electrical grid “cannot get enough renewable energy”, he said and to that effect Germany plans to import renewables. Perhaps as an aside to other politicians that perhaps see international cooperation and mutual reliance as relatively unimportant, Herdan said that this is a form of international trading – “which is also a peace-making process [in itself] by the way”.

This could mean not only the import of electrons, but also hydrogen, liquid fuels and other ways of storing and transporting energy. The minister also said that it was important to not only think of an “all-electric” future, but that there could be a range of technologies and strategies for modernising the energy system.

Market design changes across the continent could follow German model

In the US, regulator FERC (Federal Energy Regulatory Commission) has begun a process of allowing energy storage to participate in wholesale markets. Speaking to Energy-Storage.News at the event, Thorsten Herdan said that Germany has already done something similar, but as yet “only inside Germany”.

“We are going for the next big step in the Energy Union where we are going to open up markets all around Europe. It means you have requirements on both sides to be the same. So if someone has capacity markets in their jurisdiction, where you have capacity paid for and waiting to be used, the other one hasn’t – you don’t have a market,” Herdan said.

Herdan came onto a point which illustrated not only the importance of opening up the markets, but also of valuing a range of network flexibility options, including energy storage, demand side response and also interconnectors, which transmit power over large distances and often between different countries.

“We have this problem in Germany that our interconnectors from the North to South are not strong enough to transport for instance wind energy to the South. Normally a market would react to that with two price zones”.

“It comes to the point that we open all interconnectors to 75% of capacity in Europe. There’s always more electricity coming in and the problem gets bigger. We are absolutely against two pricing zones as that would kill the energy transition directly. We have higher consuming industry in the South. If they had to pay higher prices for electricity than those in the North that would be no good for Germany and the Energiewende (‘Energy Transition’).

Building out the grid, maximising its utilisation and making the movement of energy and its attendant monitoring and trading are “the only ways out”, Herdan said. For example, an interconnector planned with Norway would take Norway’s surplus hydroelectric power in winter months into Germany, while in summer German PV and wind energy would go back in the other direction. Herdan said that was one option to create flexibility without necessarily using energy storage, although a recent trial involving grid operator TenneT and storage industry player Sonnen did create a system for sharing northern wind and southern solar in Germany and the Netherlands.

The key point, Herdan said, was that “strong neighbours in Europe” could and should help each other in the energy transition. While “six or seven years ago” Germany conducted its energy policy enactments alone, Herdan said this was a mistake. Surplus power sent to the Czech Republic, would frequently go unused as the grid there did not need it, to give one instance.

“We then changed this policy and said we cannot think we are an island. Either all of Europe gets an Energy Union or the whole thing fails.”

Herdan also said Europe-wide carbon pricing for both Emissions Trading Schemes and non-ETS will be important going forward, as will creating a “true Energy Union” throughout the EU. The forthcoming EU Clean Energy for All Winter Package would create a market and regulatory framework applicable throughout Europe, while freeing it from the possible interference of politicians. Herdan was emphatic that while politicians should help enable market design and creation, they should stay out of energy pricing and stick to “defining responsibilities” for various stakeholders.

A Europe-wide policy that could have a big impact on energy storage is if the Union follows Germany’s moves to change its internal regulations. Previously, to sell electricity, the vendor did not physically need to own that energy at the time of sale and were not penalised for not having it.

“Now you physically have to have the electricity when you sell it. If you don’t have it you pay €20,000 (US$24,806) per MWh. This gives a very strong signal, like an insurance solution, so people insure themselves with flexibility options, whether that’s demand-side response (DSR), storage or something else,” Herdan said.

“They really have to have the electricity available when they sell it and that will be applied across Europe.”