The cost of solar energy paired with battery storage on France’s island territories has fallen yet again, as the European country awarded contracts to winning bidders in its latest tender process.

Results have been announced for the third annual edition of France’s tenders for projects enabling the self-consumption of new renewable energy capacity in areas not connected to the country’s main grid network. A total of 57MW of solar-plus-storage projects were awarded, with each MWp of solar required by the rules to be coupled with at least 0.5MW / 0.5MWh of battery storage.

Analysts Tanguy Poirot and Corentin Baschet at consultancy Clean Horizon told Energy-Storage.news that in practise, battery systems tend to be oversized in order to not only meet this criteria but also to be able to benefit from a bonus for injecting power to the local community’s network during evening peak times. This means that “approximately 0.75MW / 1.5MWh” of battery storage is installed per MWp of solar, the analysts said.

“The battery is used essentially to smooth PV generation by ensuring ramps are not too steep, forecasts provided to the grid operator are matched and part of the electricity is shifted to the evening peak,” Clean Horizon’s Corentin Baschet said.

Developers working on island territories including Guadeloupe, Corsica and Martinique as well as French Guyana – not an island but not connected to the French grid for obvious reasons – have been awarded contracts for around 50MW of solar PV capacity each year since the auctions began to be held annually in 2016, although the first such auction actually took place in 2012.

The most recent results, revealed by the Ministry for Ecological Transformation, are for a tender round opened in 2019. The 47 projects will receive payment via long-term power purchase agreements (PPAs) backed by the government at an average tariff of €98.6 (US$120.81) per MWh. Clean Horizon’s analysts pointed out that this is the first the average prices of projects in one of the tenders has fallen below €100/MWh. 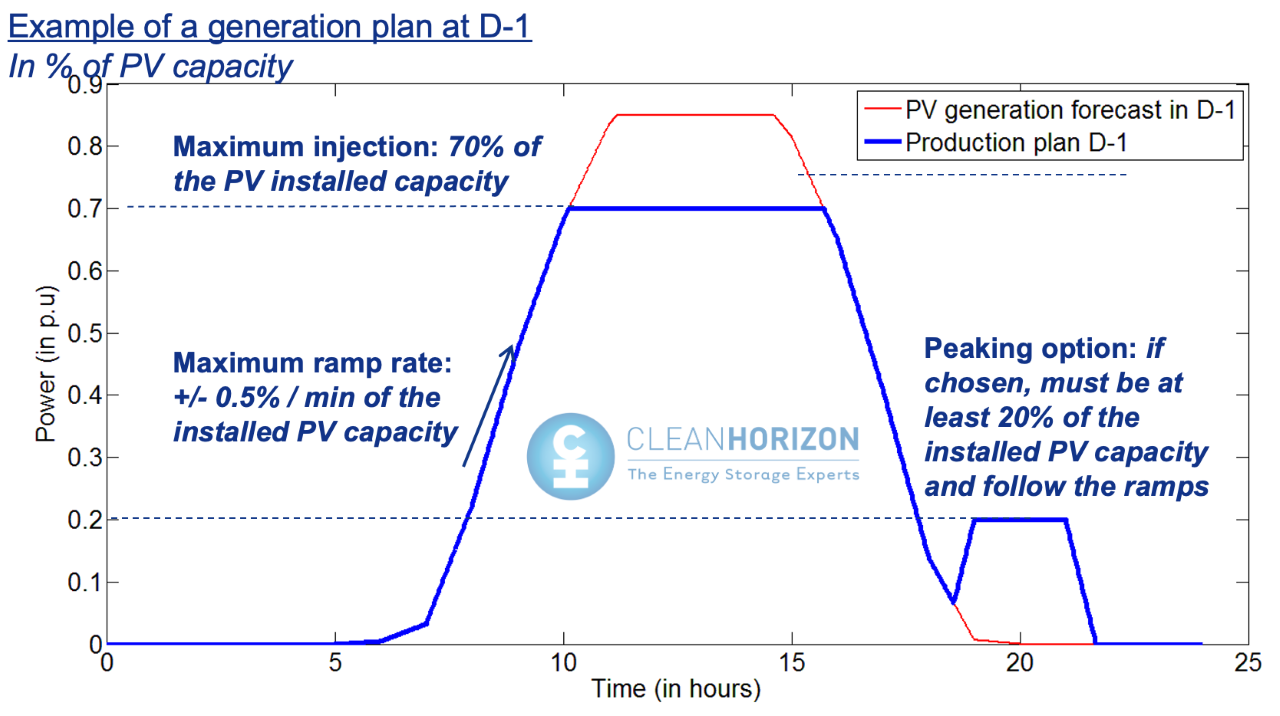 How the battery energy storage fits into the framework of the auction rules and winning projects. Image: Clean Horizon.

‘Solar-plus-storage is an economic energy resource in these territories’

“This means that the most competitive large-scale are probably lower than €80/MWh: which shows that this energy is competitive in these remote and small territories,” Corentin Baschet said.

While the official results announcement from the French government shows a list of winning developers and projects, in most cases a special purpose vehicle (SPV) company has been created per project, making it difficult to figure out who is behind the project in many cases. Clean Horizon’s Tanguy Poirot sifted through the available data and produced the graph below which shows who the winners were in a simplified way.

Large-scale projects (those over 1.5MWp of solar) represent around 60% of the auction volume, while the major winners in that category, Akuo Energy, Total Quadran, Valorem and NW Energy are well-experienced “usual suspects in these geographies”, Baschet said. Meanwhile, “many smaller players” have also been able to win contracts for smaller projects, with developers showing an appetite for rooftop solar projects.

In a previous interview last year on the development of France’s energy storage market, Corentin Baschet had described the French non-interconnected territory solar tenders as a “small but recurring” opportunity in the country. While France is at a relatively early stage of energy storage deployment, last year the country held a Capacity Market auction with a tranche of low-carbon requirement capacity and the national grid operator, RTE, is trialling the use of battery storage as a ‘virtual transmission’ asset to help manage grid constraints.

The island tenders have a specific framework, Baschet said, because France started deploying renewables in those territories very early on and many of them quickly reached limits of 20%-30% renewable penetration. With their grids “not comfortable” adding more renewables going forward, the use of battery storage to help integrate increasing clean energy resources was built into the tender framework. One example is New Caledonia, nearer the coast of Australia than mainland France, which reached 22% renewable in 2018 and is thought to now be close to 100% renewable-powered thanks to a number of solar-plus-battery projects.

As with other island territories around the world, the remote French regions tend to require the import of costly, polluting and often unreliable fossil fuels such as diesel and fuel oil and their displacement or replacement with solar and storage can make economic sense, as evidenced by the latest auction results.

The annual staging of the auction process and the incremental increases in knowledge and experience of participants coupled with the general global trend of cost declines in both solar and energy storage have meant the tenders have also seen costs driven down significantly.

A 2017 round of awards saw 67 solar-plus-storage projects attain a guaranteed purchase price for power of €113.60 per MWh – which itself was a 40% reduction on prices from a previous auction. At that time, the French ministry of ecology, sustainable development and energy said that the cost of power from conventional sources in the territories averaged about €200 per MWh. 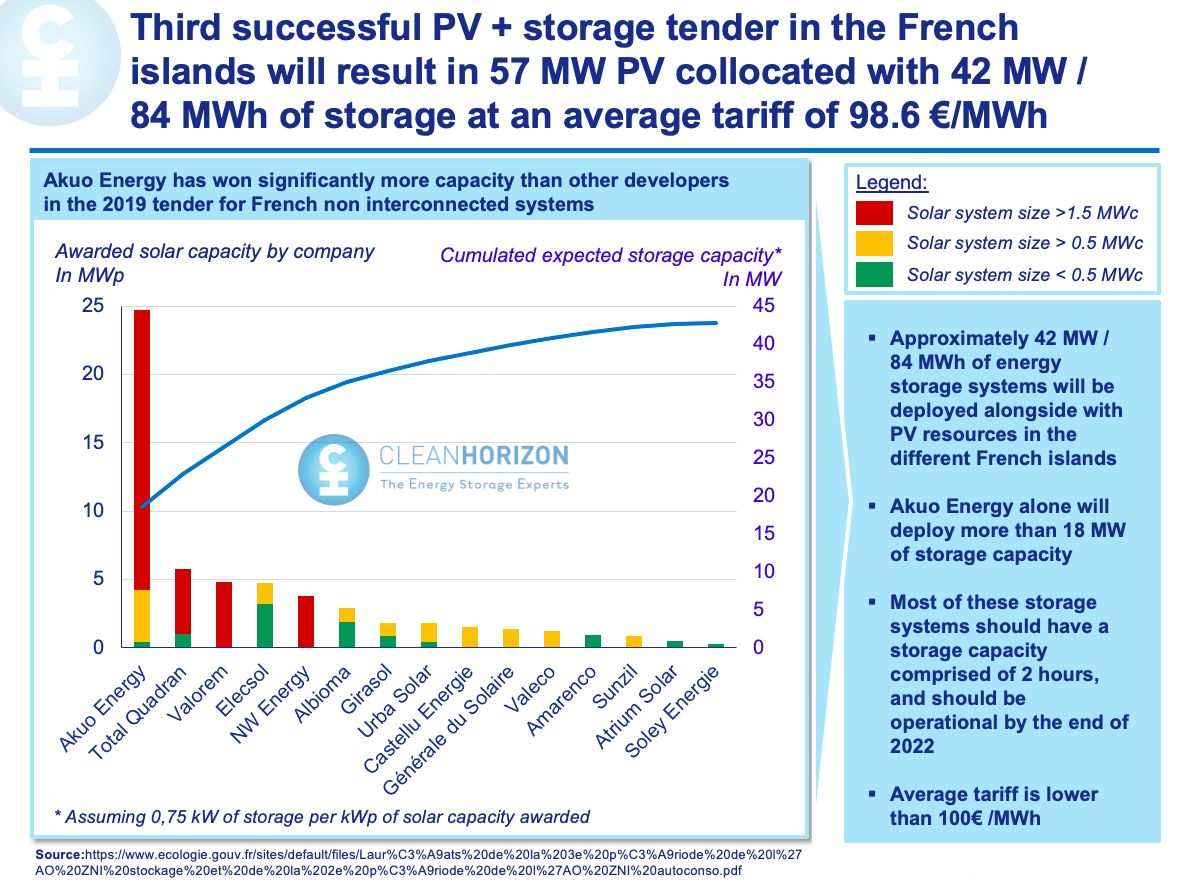