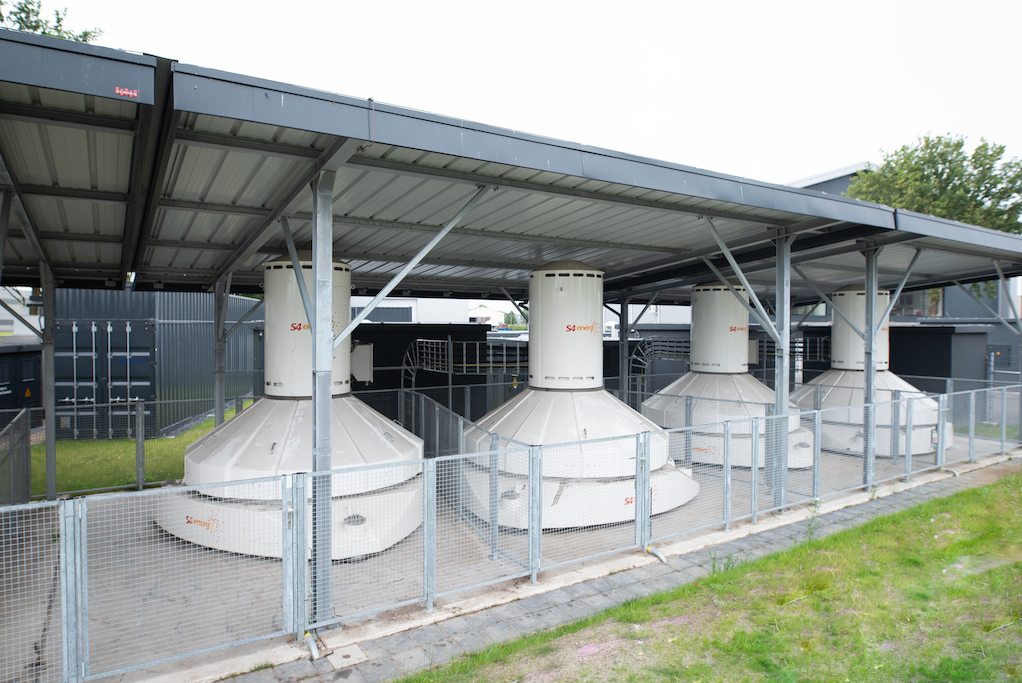 A hybrid energy storage system combining lithium-ion batteries with mechanical energy storage in the form of flywheels has gone into operation in the Netherlands, from technology providers Leclanché and S4 Energy.

Switzerland-headquartered battery and storage system provider Leclanché emailed Energy-Storage.news this week to announce that what began as a small-scale pilot of the twinned technologies has now gone to grid-scale and into commercial operation.

The hybrid system combines 8.8MW / 7.12MWh of lithium-ion batteries with six flywheels adding up to 3MW of power. It will provide 9MW of frequency stabilising primary control power to the transmission grid operated by TenneT and is located in Almelo, a city in the Overijssel province in the east Netherlands.

The system’s provision of services into the market will be managed by S4 Ancillary Services, a joint venture (JV) part-owned by flywheel manufacturer and supplier S4 Energy. S4’s partner in the JV is a local government-owned entity, Energiefonds Overijssel, which aims to accelerate the transition to clean energy in the province. Overijssel is targeting 20% renewables by 2023 and the storage system helps the local grid to manage increased shares of variable renewable generation.

“We believe that the combination of these two technologies provides a clear advantage for enhanced ancillary services and the further integration of renewables into the grid,” Leclanché VP for system engineering Daniel Fohr said.

Hybrid combination plays to complementary strengths of each technology

S4 Energy launched into the frequency containment reserve market using a combination of its KINEXT flywheels and batteries in 2017. According to the company’s project director Dominique Becker Hoff, the flywheel supplies instantaneous power for very short periods of time without losing capacity. The 5,000kg KINEXT flywheel operates at 92% efficiency, storing energy as rotational mass.

The technology is seen as complementary to higher capacity electrochemical battery storage because the flywheels are not prone to degradation. The flywheel component can supply reserve power continuously while the battery only joins in for lengthier variations in frequency, protecting the batteries from degradation and ensuring a longer lifespan for cells.

“Our collaboration with Leclanché has truly delivered a new, best-of-breed solution, with positive implications for clean energy and for the grid operators responsible for delivering reliable energy to their end-users,” Dominique Becker Hoff said.

According to the Leclanché release, this means the batteries can last a minimum of 15 years. The Swiss company, which also has facilities in the US, said it supplied the full battery energy storage system (BESS), along with inverters and energy management system (EMS) which monitors and controls the battery system.

While a few flywheels for energy storage have been deployed around the world in the past few years, including one of the US’ earliest advanced non-pumped hydro storage systems in a pilot by the government Department of Energy, their widespread use has not taken off to date. That said, technology developments mean that they have been seen in use for anything from a few minutes’ storage to much longer durations – with US manufacturer Amber Kinetics touting a four hour flywheel a couple of years back.

North America-based project developer Convergent Energy + Power bought up a 40MW portfolio of operating flywheel assets in 2018, which added to another 5MW later acquired made the company currently the world’s biggest commercial operator of flywheels.

Convergent CEO Johannes Ritterhausen told Energy-Storage.news a while back that while his company “loves” the flywheels they do have, he anticipated that new assets for frequency regulation would be predominantly if not entirely lithium-ion. S4 Energy will be hoping that the combination of the two technologies could be the answer to a new lease of life for the fast-response mechanical storage systems. Leclanché meanwhile is undergoing restructuring and pivoting towards becoming a “green tech software and systems integration company” as well as launching a build-own operate business model for energy storage systems, having also secured funding for its manufacturing and R&D activities from an investor earlier this year.