One observer on Twitter noted of Tesla’s Battery Day livestream that nearly 300,000 people had tuned in to what was in some ways “a science lesson” about batteries.

Earlier this week, we collated some views on the overall strategy the company intends to implement to improve both battery cell design and battery manufacturing and integration. Experts from IHS Markit, BloombergNEF, EIT InnoEnergy and BAX & Company helped us along with that one. You can also read our report of the day itself here.

In this final piece of in-depth Battery Day coverage, let’s take a closer look at the technology, manufacturing techniques and value chain improvements Elon Musk and Drew Baglino talked about.

“What I really liked about this Battery Day, being a battery scientist, is how they had this hands-on approach of solving actual problems,” Dr Kai-Philipp Kairies, CEO of ACCURE, a battery intelligence data analytics platform provider, says.

“They said there are five or six concrete challenges that they’re going to improve iteratively, and by adding up all of these small but important improvements, ‘we’re going to take a technology that’s already working’ – they have billions of miles on this type of battery – ‘and we’re going to make it twice as good.’”

“It’s all plausible: these five or six fields in which they want to improve their batteries in terms of form factor, in terms of adding silicon to the anode, in terms of dry-coating and such. These are all technologies that have been around for a couple of years and so I do see a very high probability that they will eventually get all the pieces together.

“It might take a year or two longer than anticipated but generally from a scientific point of view, it all makes sense – but implementing it of course is difficult, especially in mass production. But if you have the right people and enough money to even go through maybe two or three trials that don’t work from the start, but you can just iterate until it works, I think it’s very feasible what they’ve planned.”

Feasible and plausible, but what Tesla proposed was nothing short of “the transformation of lithium-ion batteries,” which is “critical for addressing sustainability concerns and improving performance,”  according to BAX & Company experts, materials scientist Marcos Ierides with innovation consultant Maarten Buysse and analyst Beatriz Pérez.

From a slightly different perspective, a panel of experts at Photovoltaik Institute Berlin (PI Berlin), told Energy-storage.news that while “Tesla’s ambitious plans to scale up battery production and make major technology advances toward lowest cost batteries are all important messages for the energy storage industry,” many of the actual technology advances the company announced are in themselves “not revolutionary”.

Nonetheless, as ACCURE’s Kai-Philipp Kairies alluded to, it was stringing together all of the different improvements to make holistic changes to not just the battery cells, but the scale and speed of manufacturing that, if successful, will have the most impact. This was a view that Florian Mayr at consultancy firm Apricum – The Cleantech Advisory, agreed with.

“What I particularly liked about Tesla’s cost-down- and performance-up-approach  is the systematic screening of the entire battery manufacturing chain and the constant challenging of how things are done today,” Mayr said.

“They seem to be very good at thinking outside of the box.”

“The tabless cells [Tesla said they will build] are considerably larger than current ones, at 46x80mm, and have better performance as well as lower costs. On an electrochemical level, the tabless design replaces the small conductive area of the tab with a wide interface leading to more even electrochemical rates, lower heat generation, lower electron traveling distance, and lower reduction in resistance,” the team from BAX & Company said.

PI Berlin’s expert team noted that early on, Tesla went for the approach of “working with a large number of inter-connected small battery cells,” while most manufacturers of stationary and automotive applications have “already moved to larger format cells”. So the move to larger cells is nothing “inherently new, but does represent a major strategic shift for Tesla themselves,” PI Berlin noted.

Even going to the larger format, Tesla has stuck with cylindrical battery cell architecture, rather than the large pouch cells often favoured by their automaker rivals. CEO Elon Musk explained that this is to do with maximising speed of production output.

“One of the most unexpected announcements at Battery Day was Tesla’s goal to leverage metallic silicon anode technology and to manufacture it internally,” says Dr Francis Wang, CEO at Nanograf, a company that has developed silicon alloy-graphene material architecture to help overcome some of the technical hurdles associated with silicon anodes.

“Although metallic silicon has numerous attractive characteristics, the massive expansion and SEI (silicon electrolyte interface) issues have prevented it from widespread adoption. As Elon Musk says, silicon oxide-based solutions should be the advanced anode of choice for mainstream battery producers today, and they should be expected to dominate the market over the next five to seven years.”

Florian Mayr at Apricum, meanwhile, said that the silicon anode was the “best example” he had seen of Tesla’s aforementioned “cost-down and performance-up-approach”.

“Many players tried to counter the challenge of volume expansion with sophisticated engineering and therefore costly materials. Tesla, instead does not try to prevent the expansion, but rather to work around it by stabilising cheap raw silicon through elastic ion-conducting polymer coating,” Mayr says.

“So at the end of the day, they get the increased range from a silicon anode, but without the high costs.”

BAX & Company’s experts agree that Tesla’s move away from carbon-based anode materials such as graphitic carbon and graphene to silicon “will address several issues,” the most important of which is energy density.

“This is because silicon has almost ten times the (theoretical) capacity compared to carbon-based materials, at some 3500mAh/g. Next to its superior electrochemical performance, silicon is the most abundant material on earth after oxygen, eliminating potential shortage issues.”

While this might sound like bad news for Nanograf’s Francis Wang, since his company’s processes create high energy density battery anodes made with a composite of silicon and curved graphene, Wang says that overall, the key takeaway is that, as with his own company, “Tesla has acknowledged silicon as the best anode material.”

“Silicon anodes are an intrinsically low-cost additive, primarily through increases in energy (kWh). Specifically, Tesla says the addition of silicon anodes will increase driving range by as much as 20% and lower cost by 5%,” while Wang was also pleased to point out that Musk himself even “pointed to the shortcoming that NanoGraf’s silicon graphene anode technology fixes – protecting silicon from the wear and tear of swelling and contracting with every charge and discharge.”

BAX & Company’s Ierides, Buysse and Pérez also highlighted the downsides of using silicon including high volume changes during cycling, accelerating battery degradation, and causing a high initial reversible capacity loss. However, BAX notes that “multiple institutions” have already been working on silicon anodes and that there are several approaches to mitigate these issues, such as the use of “flexible substrates such as fabrics to cope with interface stress”.

“Overall, Tesla’s strategy is in line with the expected anode developments and coincides with generation 3b anodes as defined by European battery consortia, expected to be commercialised around 2025,” the BAX experts say. 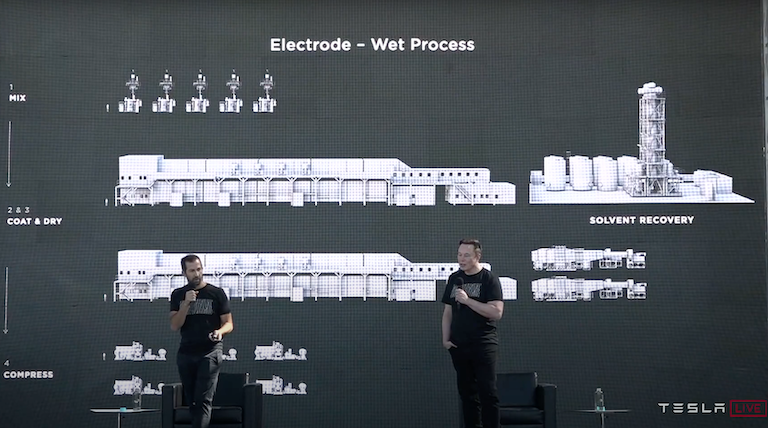 One thing many pundits did get right in predicting what would happen on Battery Day was the announcement that Tesla wants to bring dry coating of electrolyte onto cathodes to mass production. The company had a year or two ago acquired Maxwell Technologies, a US maker of ultracapacitors, which had also been working on this improvement for making batteries by eliminating the coating’s wet process step.

Succeeding in commercialising that dry coating step “has the potential of a dramatical reduction of the energy consumption in the manufacturing process as well as eliminating a lot of hazardous and toxic solvents,” Johan Soderbom, thematic leader for energy storage at European Union-backed innovation accelerator EIT InnoEnergy said.

ACCURE’s Kai-Philipp Kairies also said that taking away the wet coating and drying step reduces the footprint of factories significantly if it can be achieved. Furthermore, in the case of Tesla’s GigaBerlin project under development in Germany, the company has been locked in struggles with environmental groups over expected volumes of wastewater coming from the enormous battery factory. As well as improving the sustainability of the process, it could also enable Tesla to “pump out more batteries as fast as possible,” Kairies said.

For EIT InnoEnergy’s Johan Soderbom however, this particular improvement was the only one Tesla focused on that would also improve the sustainability aspects of the company’s battery production, albeit one that would do so dramatically. Soderbom argues that the European Battery Alliance, which seeks to do in Europe what China and now Tesla have done for battery manufacturing elsewhere in the world, sees “sustainability in the battery manufacturing process…[as] one of the more important parameters in the European Battery (Alliance) value chain.”

PI Berlin experts say that commercialising the dry coating process could be among the more challenging aspects of its scale-up and optimisation plans. While it will be a “major step in reducing waste and energy consumption,” PI Berlin said, Musk himself declared it to be extremely complex.

“It very much remains to be seen how feasible it really is and how long it will take, especially to scale-up such production processes at scale.”

EIT InnoEnergy’s Johan Soderbom said that Battery Day’s main conclusion is that “there is a bright and not so distant future for batteries that changes the playing field for EVs as well as for ESS and that this is achievable with modification of today’s technology”.

One of the biggest changes Tesla touted was the elimination of cobalt from its batteries, introducing high nickel content and nickel-manganese batteries for long range and high energy density applications. This likely won’t apply to stationary energy storage however, and the company’s favoured solution for this segment – as well as for shorter range vehicles – is to use lithium iron phosphate (LFP) cells. Again, nothing particularly new here as many in the energy storage industry already use LFP, although a change in strategy for Tesla itself.

Overall, people should not hope for a “sudden breakthrough”, according to Kai-Philipp Kairies, who prior to starting up ACCURE was an academic and technical consultant at industry-focused university RWTH Aachen in Germany.

That “sudden breakthrough” will most likely not come. However, at the same time, Tesla is emphasising the potentials of continuous optimisation and that is something that people “significantly underestimate,” Kairies says.

“Improving batteries is not so much about ‘that one new cathode or electrolyte material’ but rather a puzzle of many small improvements.”

The sheer scale that Tesla hopes to achieve is in itself worth thinking about, Kairies said.

“This Battery Day was a statement, for me, that Tesla are going to build so many batteries, because now they are designing a product, a technology that’s so much more scalable than the ones we had before.”