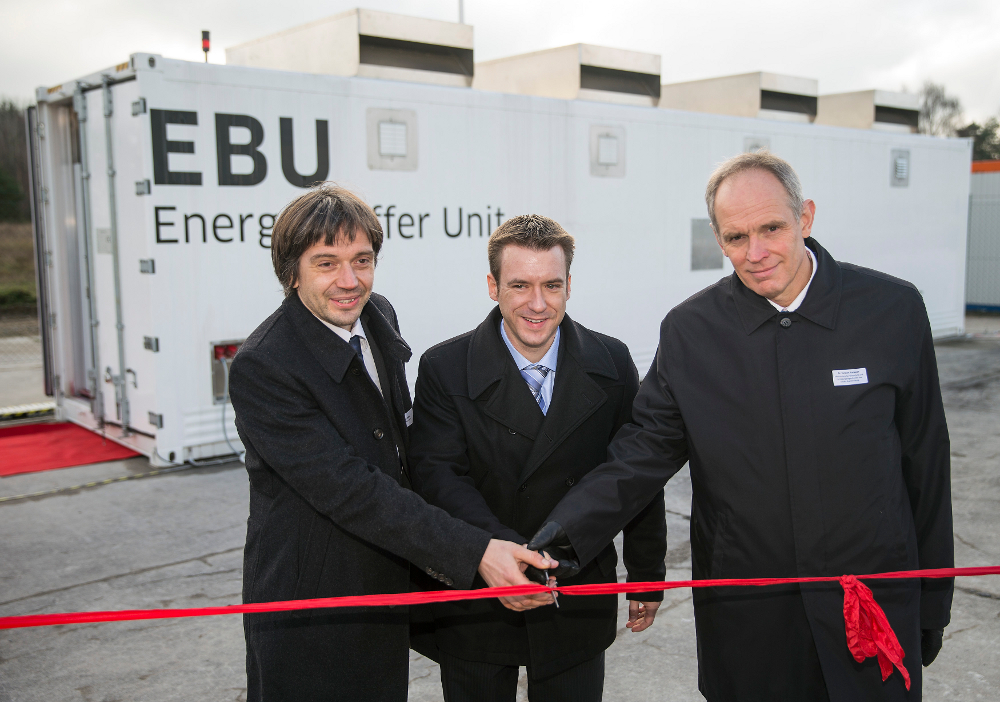 A grid-balancing energy storage system is inaugurated at Alt Daber, a large-scale solar PV plant in Germany, in 2014. A lot has changed in the dynamics of the global energy storage market landscape since then. Image: Belectric.

While European power markets outpace the US and China for renewable energy deployment, the continent’s policymakers are yet to recognise the importance of energy storage for integrating that capacity onto the grid, new research from Wood Mackenzie Power & Renewables finds.

Rory McCarthy, principal analyst at Wood Mackenzie said that in the US energy storage deployments have raced ahead, particularly in the front-of-meter utility-scale market because they are largely  driven by procurements from vertically-integrated utility companies, combined with the healthy incentives offered by the investment tax credit (ITC) policy.

“[Vertically-integrated utilities in the US] can assess their whole system portfolio, operational and delivery requirements and run a tender on that basis. Ultimately, they can contract with the lowest cost combination of technologies to deliver a whole system solution, therefore giving the best investor return while ensuring high quality power is delivered,” McCarthy said.

“As a result, we are seeing renewables and energy storage outcompete alternative flexibility service providers, such as gas peakers, in an increasing number of procurements.”

Conversely, the proposition for energy storage in Europe is “on a merchant basis with higher risks and financing barriers,” and is defined by a wider range of market players, McCarthy said. While the US could make up a potential 49% of global energy storage deployment capacity by 2030, Europe’s share is dwindling: from 44% in 2014 to 30% in 2019.

By 2025 this could decline to just 20% and then 13% by 2030, according to Wood Mackenzie’s analysis. McCarthy said that it is “almost impossible” to expect similar ramp-up in deployment of energy storage in Europe to what has been seen in the US and China as well as what is expected going forwards.

“However, despite this, Europe will continue to possess proportionally more variable renewable energy (VRE; wind and solar) than any other region on the planet,” McCarthy said.

“While delivering low-cost, low-carbon power in abundance, the non-dispatchable nature of VRE presents a flexibility challenge for power systems. Particularly over the 2020 coronavirus lockdown months, we witnessed the impact of high VRE on the system, resulting in low and negative power prices. This points to a lack of system flexibility.”

“Energy storage will be at the forefront of meeting this challenge, as the technology can provide much-needed flexibility with zero carbon emissions, while keeping power prices more stable and affordable for the end consumer.”

European energy system analysis company EnAppSys recently reported on the phenomenon of growing negative pricing across the continent, largely caused by an abundance of renewable generation on the grid at times when the demand for power is not as great. EnAppSys analysts told Energy-Storage.news that the deployment of energy storage, at growing durations of storage capacity, could help counter this problem.

Pockets of opportunity should lead to wider procurement mechanisms

Wood Mackenzie believes that government-led auctions and tenders – which are the primary mechanism for driving renewables deployment in Europe – should recognise energy storage, in particular how renewable plant projects could be “hybridised” to include batteries or other storage. Auctions should be designed to incentivise generators putting power on the grid when it is most needed, analyst Rory McCarthy said, and “…not just when the sun shines or the wind blows”.

Germany has already launched its first so-called Innovation Tender that awarded capacity to solar projects paired with energy storage and plans to continue with them until 2028.

While the design of the tenders still requires further consideration, according to energy storage group BVES, their inclusion in an otherwise heavily-criticised new set of renewable energy laws drafted for introduction next year is a positive step, BVES policy and markets expert Valeska Gottke told Energy-Storage.news this week.

This week, the site also published an extract of ‘Europe’s energy storage transformation’, a feature article by analyst Naim El Chami at technical and markets consultancy Clean Horizon. The article looks at several levels of potential opportunity for energy storage, both in a continent-wide sense and in a few key regional markets.

El Chami pointed out that frequency control markets originally played a major role in energy storage uptake in Europe, with 3GW of frequency control reserves jointly procured by six countries in Western Europe. However, battery storage has in some ways been a victim of its own success: as markets saturate, the prices paid for these services come down, meaning battery assets in European countries including Germany and France are seeking new revenue streams to bolster their business case.

Without contradicting Wood Mackenzie’s overall view that Europe might be outpaced by its rivals, specific pockets of opportunity do exist in Europe, as the article from Naim El Chami points out.

In Italy, grid operator Terna is looking to procure 230MW of fast reserves and a new Capacity Market will be launched while it estimates 3GW of energy storage will be needed to integrate targeted renewables capacity additions; in France, large-scale pilot projects are underway to see if 98MWh of batteries can help manage grid congestion in constrained areas; and Spain has set itself a 2.5GW energy storage target by 2030 – albeit Clean Horizon believes there is as yet no business case to support such a goal.

Earlier this year, El Chami’s colleague Corentine Baschet, Clean Horizon’s head of market analysis, spelled out many of the big differences between the European and North America energy storage market dynamics in an interview for Energy-Storage.news.

Baschet said the example of how the UK transitioned from a frequency regulation-led market for energy storage to enable the stacking of revenues for providing multiple service on a merchant basis could be followed by other European countries.