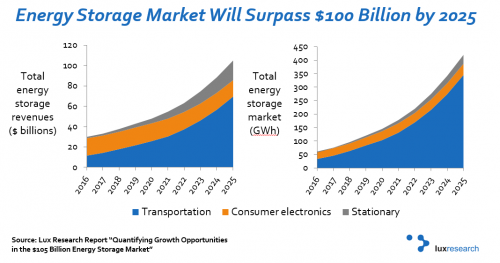 Lux’s breakdown of the market as forecast by analyst Chris Robinson and team. Image: Lux Research.

As early as next year, demand for energy storage in consumer electronics could be overtaken by markets for electric mobility and stationary energy storage, Lux Research has forecast.

To date, the market for energy storage, mostly in the form of electrochemical lithium-ion batteries has been largest in supplying batteries for smartphones, laptops and other consumer goods. However, the twin accelerating markets for renewable energy integration and plug-in electric vehicles (EVs) could outstrip this demand as early as 2018, the Boston-based research and analysis firm has claimed.

According to analyst Chris Robinson, lead author of a new report, Quantifying growth opportunities in the $105 billion energy storage market: “The emergence of plug-in vehicles from Tesla and its competitors will reshape the energy storage market, while increasing renewable deployments will make stationary storage energy another source of growth.”

The total energy storage market will be worth US$100 billion by 2025, Lux predicted, with around US$69 billion market value for the transportation sector. While stationary storage will be a smaller market, with US$19 billion revenues predicted for that year, Robinson and team said it will be the fastest growing sector to demand high volumes of energy storage. By 2025, stationary energy storage will add up to 34GWh of demand, Lux’s forecasts state, with highest demand growth in India and China. Long duration storage in particular is expected to see demand increase.