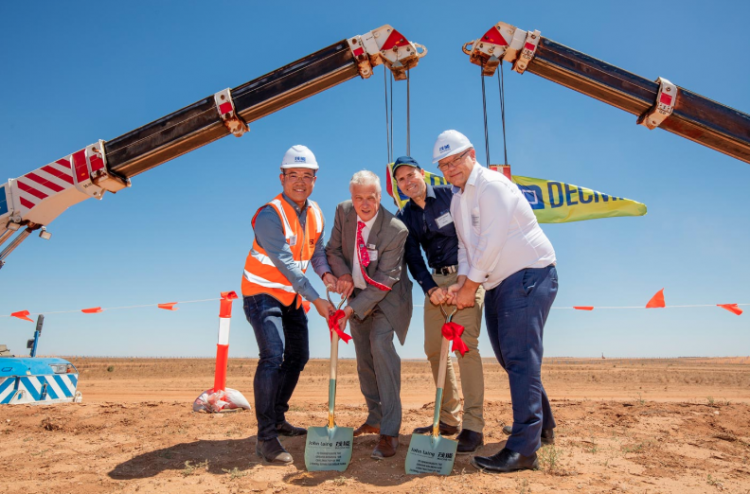 Maoneng is also now preparing another 500MW of solar to be commissioned in line with the proposed SA/NSW interconnector, together with additional energy storage. Credit: Maoneng Australia

Maoneng Australia has said energy storage can improve the reliability of solar and “minimise the technical and commercial impacts” of electric system modernisation, as the developer broke ground on a 255MW solar project in New South Wales, Australia.

EPC contractor Decmil announced that is has broken ground on the 255MW Sunraysia solar plant in Balranald, New South Wales, Australia. A large-scale grid-connected energy storage project, named Sunraysia Emporium, will be located adjacent to the solar plant, although further details have not yet been given.

Construction on the PV plant will require 350-400 workers, with the installation of more than 755,000 JinkoSolar PV panels mounted onto single-axis trackers from NEXTracker, more than 4,000km of cables and 100,000 piles over 800 Hectares. The PV project is expected to generate approximately 529GWh of energy per year when commissioned; which is the equivalent to powering up to 50,000 households.

The solar farm is connected to a 33/220kV substation co-located on-site where the energy is transferred to the Transgrid 220kV Balranald Substation. From there the energy is then transferred either towards Buronga/VIC or Darlington Point/NSW. As part of the works, approximately 400km of new fibre optic cable will be installed between the Buronga and Darlington Point substations to improve communication and control of the solar farm.

The project is supported by two Power Purchase Agreements (PPAs) under which UNSW Sydney and AGL Energy (AGL) will purchase energy over 15 years. It reached financial close with John Laing in October last year.

“As a responsible renewable energy developer, we are cognisant of the impact which renewable energy has, both good and bad. To improve the reliability and to minimise both the technical and commercial impact of our developments moving forward, we aim to implement energy storage systems capable of time-shifting large amounts of energy throughout the day. Only by doing this, as a matter of best practice, will we be able to transition towards a 100% renewable energy future,” said Qiao Nan Han, VP of Maoneng Group.

“Sunraysia is strategically placed to service multiple states and territories given its proximity to the proposed interconnectors and the main charging route for the Snowy 2.0. AEMO’s ISP (Integrated System Plan) looks at various scenarios including the development of a large Renewable Energy Zone here at Balranald. We are excited to be part of this moving feast and welcome the challenges and responsibilities which come with these developments,” Nan Han added.

Maoneng is also now preparing another 500MW of solar to be commissioned in line with the proposed SA/NSW interconnector, together with additional energy storage.

Australia is a global frontrunner in large-scale solar-plus-storage projects, with regular project announcements over the last year.