Energy Storage Digital: What we learned at the online event, and how you can still join in

Our publisher, Solar Media is currently hosting a season of online conferences, the Digital Series. Topics still to run include Solar & Storage Finance (1-5 June) and Energy Technologies (15-19 June), while last week we saw the Large-Scale Solar series. Our Energy Storage Digital Summit got us off to a low carbon yet globe-spanning start and took place from 11-15 May. From a full week of webinars and panel discussions, there was a huge amount of ground covered. Here are some more of our takeaways and there are links below to some of the news and views we've already posted. ​

Erik Stokes, branch chief at the California Energy Commission hosted a panel discussion: “Timeline to building a safe storage project” on the first day. Speaking to three senior team members at developers Soltage and Hecate Energy, and from consultancy Geostrategies, Stokes heard that COVID-19 is unsurprisingly having an impact on project execution.

Brian Schmidly, founder at Geostrategies said that most battery and equipment manufacturers sending products out from Asia are now back online, but that there are likely to be delays and bottlenecks toward the end of this year as everyone plays catch-up. This is perhaps similar to the early days of solar, Schmidly said, when demand outstripped available supply for PV modules.

Hecate Energy general counsel Holly Christie noted that while in the first few weeks of the pandemic, many parties claimed force majeure clauses, since force majeure refers to something unforeseen, after a period, it becomes more difficult to argue that the delays are “now not unforeseen”. Change of law provisions are now “fluid notions that were not necessarily so before”.

Dirk van Ouwerkerk, senior VP of energy storage development at Soltage, said that the pandemic’s effects on supply chains need to be monitored very, very closely, and that there are two types of supply chain issues: “materials getting through to manufacturing, and then getting manufacturing product to the projects”. This includes the “vast majority” of manufacturing for both LFP and NMC battery cells, which is in China.

Van Ouwerkerk said that the delays are not structural in nature. He expected to see three to six months of delays but felt that the delays are “decreasing and probably not there next year”. On a related note, he went on to say that with energy storage still at a relatively early stage of industry maturity, there hasn’t been the same level of standardisation as achieved in solar. Every project is still very different and the cost of capital high. Soltage develops projects, van Ouwerkerk said, there is a constant reassessment of “fatal flaw” analysis.

Rather than doing permitting and detailed design in parallel, for example, where “you can be sung if the project doesn’t go ahead”, he said, much of the early work is done sequentially, then as viability becomes clearer, “we go to a more traditional project development timeline”.

During a session chaired by Keith Martin, a partner at law firm Norton Rose Fulbright, we heard more or less unanimously from four top representatives at investment firms that conventional thermal generation industries are focused on finding liquidity, while renewable energy projects are still going ahead and attracting capital.

Steve Cheng, partner for GIP credit at Global Infrastructure Partners, said that the “traditional thermal generation market right now is a little slow. The only activity is stuff that has upcoming maturities or potential restructuring,” which Cheng said includes both renewables and oil & gas. By contrast, the oil & gas activity is about companies dealing with the decline in oil prices, that are “looking for liquidity to try and ride out the trough in the market”.

Investec’s co-head of power infrastructure finance, Mike Pantelogianis, said that his firm has noted “traditional conventional power generation to be somewhat slow, renewables seem to be strong in terms of volume”. Scott Harlan, managing partner and founding member at Rockland Capital said that despite the pandemic, his company is “busy, with more deals getting done on the renewables side”.

It’s not all good news for renewables – Global Infrastructure Partners’ Steve Cheng said that the activity in operating opportunities are limited, while project development is more lively. In general, Mike Pantelogianis of Investec said, “smaller rather than larger deals are going ahead” at the moment, while bigger players with “deep banking sector relationships are able to close out deals and fund them,” while smaller players find that much more difficult without those relationships. 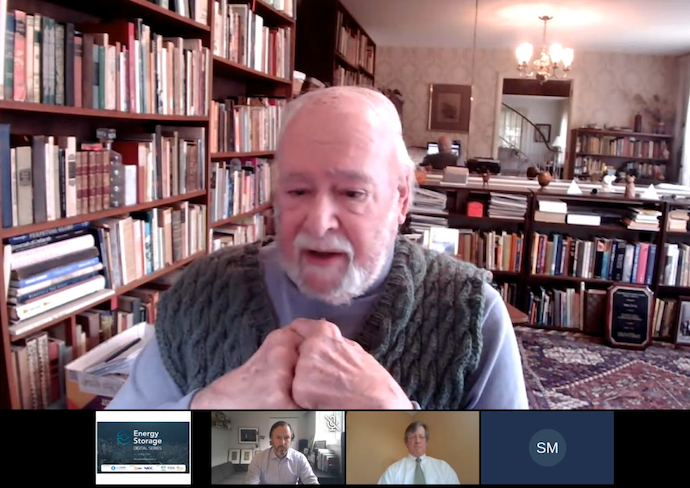 The benefits of providing multiple services from energy storage systems and stacking revenue streams are clear and better access to data, and in particular, open source data, can help with the challenges that still exist.

This was one of the key takeaways from the 'Stacking Revenues to Make Money' panel discussion. Panellists Lauren Glickman from RenewComm, Jin Noh from the California Energy Storage Alliance, Monisha Shah from the US National Renewable Energy Laboratory (NREL), Cameron Freberg from Austin Energy and Jing Liu from SMBC, agreed that there are wide-ranging benefits to stacking revenues, dependent on the project.

As Shah explained, many distribution managers are also now looking at the ability to use solar-plus-storage to manage network constraints through ‘bring your own device' schemes.

After working through a number of the projects under development, and increasing adoption rates, Cameron Freberg from Texas utility Austin Energy highlighted the importance of data and analytics for keeping ahead of the curve.

NREL has a number of tools that can help highlight the combined value of solar and storage, looking at different parts of electricity networks. In increasingly looking at the value of stacked revenue streams the group has had to combine a number of tools, which is a challenge but also one of the “cutting edge areas of research” it is currently looking into.

Along with a free software analysis tool, The System Advisor Model, the decision support tool Renewable Energy Optimisation Model (REopt) and Distributed Generation Market Demand (dGen) model that NREL has developed has helped the lab to begin to look at future grid systems and the value of distributed systems.

“There is still a lot of research to be done into how to integrate these systems together so you can consider the different value streams in tandem with each other,” Shah said.

There has been a push to open source these tools, with a 'lite' version of REopt available and they are looking into making dGen open source.

“We're often looking for partnerships to do real world research – so [that] we're not just noodling on research in an ivory tower,” Shah concluded.

This story by Molly Lempriere.

Also from the conference: Click the headlines to read the full story

‘To allow a zero carbon system, the role of energy storage needs to be understood by everybody’

Some highlights and key quotes from opening panel discussion: Predicting the energy storage tech of the future.

The importance of fire safety for the development of energy storage in New York City – which has some of the strictest fire codes in the world and is expected to help inform the rest of the US and international market – quickly came to the forefront of discussion during a number of sessions, including real-world examples of project development and work done to engage with first responders and to develop safety standards.

Long duration energy storage is “essential” to help accelerate renewable deployment, according to the US Department of Energy’s Dr Imre Gyuk who spoke at the Digital Series, but will require “appropriate regulatory frameworks”.

Merchant energy storage has become an investable asset class in the UK, according to Dr Ben Irons, co-founder at Habitat Energy, which provides battery optimisation services. The market is moving away from an emphasis on contracted revenue streams for supplying grid services. 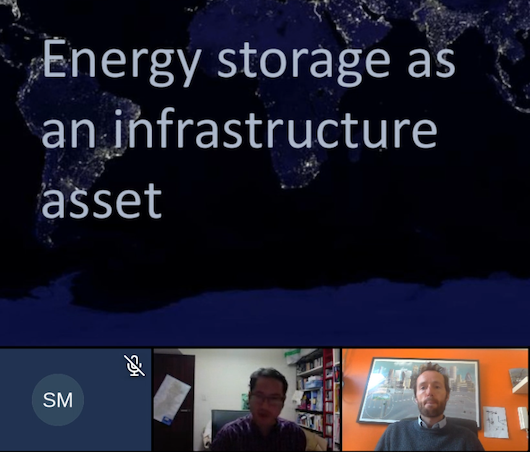 E-S.N’s editor with Gravitricity managing director Charlie Blair, who was advocating for energy storage to be considered an infrastructure asset in his presentation. Image: Solar Media.

You can still watch, listen and get involved: Podcast and on-demand video

If you’d like a less formal way to get your fix of the best of the Energy Storage Digital Series, you can listen to our podcast round-up of the event, a forty-five minute whirlwind recap of some highlights. But, best of all, the entire series is still online and available on-demand for another couple of weeks: you can still register and watch via the official event website.