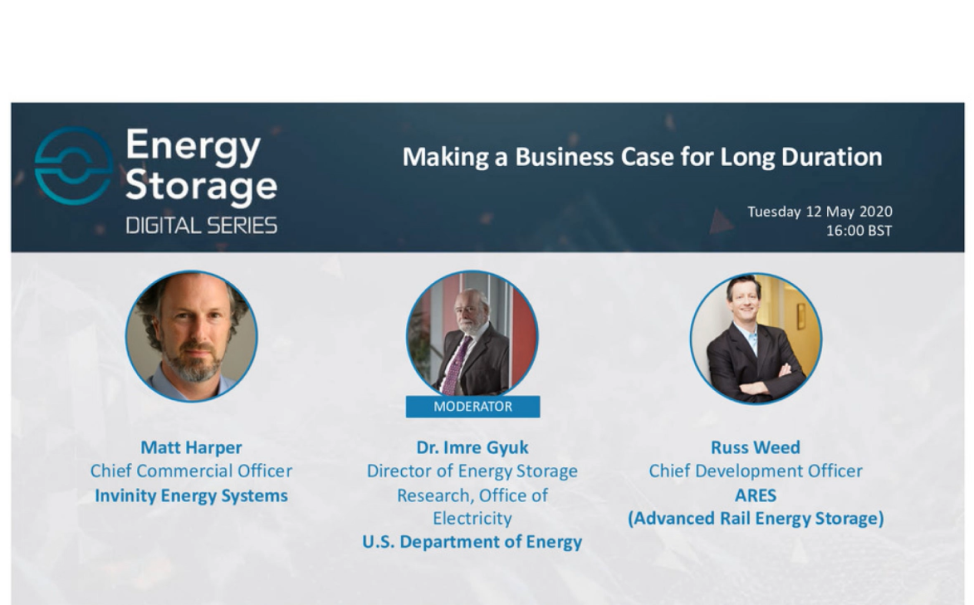 Long duration energy storage is an “essential” technology to help accelerate renewable deployment, according to the US Department of Energy’s Dr Imre Gyuk, but will require “appropriate regulatory frameworks”.

This is to ensure costs of the technology are covered in a well-regulated way, Gyuk said during a session entitled Making a Business Case for Long Duration as part of the Energy Storage Digital Summit that took place across last week.

Gyuk, who is the director of Energy Storage Research in the Office of Electricity at the DoE, said that across his 20 years of experience in the sector, he’s seen a “real evolution” of energy storage, so much so that is has now become “one of the hottest topics in the energy business”.

Projects in the US are only getting bigger, he said, with southern California to see 700MW of new storage in the ground by August 2021. Most of these are together with solar PV, which Gyuk described as the “essential feature”.

Whilst these are all 4-hour duration and all lithium-ion, eventually there will be a need for longer durations to work with PV for reasons including intermittency of generation and for storing and using energy overnight. This was echoed by fellow panellist Matt Harper, chief commercial officer of the vanadium flow battery provider Invinity Energy Systems – the company recently formed by the merger of redT and Avalon battery, two existing players in vanadium flow – who said that long duration storage would help “accelerate a high solar future”.

However, the interaction between long duration energy storage and solar was not the sole focus of the session. Speaking of the technology in comparison to lithium-ion, Gyuk said “we’re not totally happy with the incumbent lithium-ion”, citing sourcing problems, safety and reliability concerns and “above all” problems surrounding reuse, recycling and disposal.

This was a “very difficult issue” for lithium-ion, Gyuk said, although it is “perhaps not insurmountable”.

The safety of other technologies is often used as a key selling point for some long duration storage technologies, as well as their recyclability in comparison to lithium-ion. A number of companies developing non lithium-ion storage have laid claim to this, including start-up Cumulus with its copper/zinc batteries, which it lauds as having 98% recyclability, and Ambri's 'liquid metal' batteries which boast no degradation and no need for cooling or fire suppression.

Harper, meanwhile, lauded the safety of the flow batteries produced Invinity, stating they were “just as likely to put out a fire as start one”, as well as celebrating how easily recyclable they are and their ability to handle large numbers of cycles over a long lifetime with comparatively little degradation versus lithium.

In his initial presentation prior to the panel discussion, Gyuk highlighted the cost goals of a number of long duration technologies, placing lithium-ion (cells only) at US$100/kWh in comparison to a zinc manganese oxide 2 electron system which came in at US$50/kWh and vanadium flow batteries (the stack and PE) at US$300/kWh.

Touching on the costs of flow batteries, Harper said that Invinity’s were “commercially proven” and “cost-competitive with a lot of the incumbents we see on the market today”.

However, from Invinity’s perspective, long duration isn’t defined by the technology but the application, with that application being market-driven. Harper said that the application Invinity sees as “making the most sense today” is between 2.5 hours and 10 hours.

Ultimately, “we most certainly” need other technologies for long duration, Gyuk added, continuing that long duration is “essential for the development towards using renewables on the grid in massive amounts”.