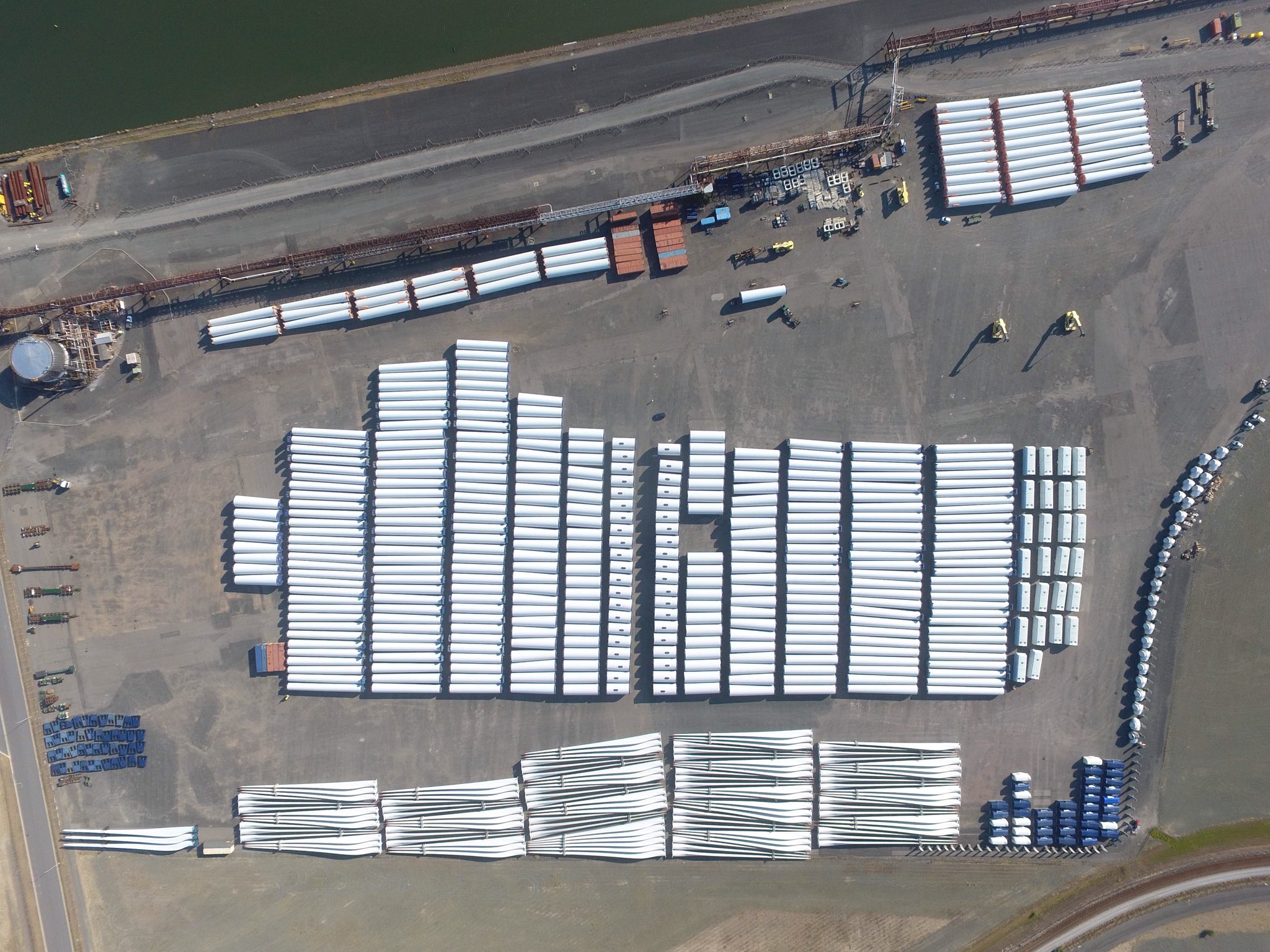 Equipment including blades, rotors and towers to be used at Sapphire Wind Farm awaiting transportation to the site. Image: CWP via Twitter.

The three projects, one of which has just been given local government approval and the other two still standing at the proposal stage, are part of the ‘Grassroots Renewable Energy Platform’, a portfolio of investments by CWP and private investment management company Partners Group to deliver 1.3GW of renewables to Australia’s market.

Just under a year ago, Energy-Storage.news reported that CWP had applied to build a solar-plus-storage facility at the 270MW Sapphire Wind Farm, which is currently under construction by the company.

On Friday, CWP announced that the New South Wales Department of Planning and Environment has approved a “c.200 MW solar-plus-storage project,” to be co-located with Sapphire Wind Farm to create a hybrid wind-solar-storage facility. The wind farm’s construction already began in January 2017, while the rest of the project should be completed in about 14 months with an anticipated start early next year.

Ed Mounsey, head of development at CWP, said that combining the three technologies will “allow large-scale, dispatchable renewable energy to be exported from the region,” hailing it as the future of energy generation, “being constructed right now”.

CWP’s other two announcements on Friday last week include one for an even larger project if proposals are approved and the planning process goes smoothly. The company has tabled plans for a “c.600MW” solar and storage plant, Parkesbourne, near Goulburn, New South Wales (NSW).

So far, CWP has filed plans with local Goulburn Mulwaree Council to build the project on freehold land. The company will be filing a project outline and preliminary environmental assessment documents with the NSW Dep’t of Planning and Environment which will kick off the development process in earnest. Ed Mounsey said CWP was developing the project with a view to being its long-term owner.

“We develop, finance, construct and operate our projects which is somewhat unique, but moreover ensures genuine and knowledgeable engagement from the start,” Mounsey said with CWP claiming the project’s early plans came “off the back of early engagement with potential hosts, neighbouring landowners and the wider community”.

Local politician Pru Goward MP said she was pleased CWP is following the correct approval and planning process and that she looked forward to hearing community sentiment regarding Parkesbourne, adding that “it’s great to see solar investment but it always needs to be in the right place”.

Also at the early stages is Glenellen solar and storage project, a “c. 200MW” project north east of Jindera, again in NSW. To be located in the local government district of the Greater Hume Shire, the project is also proposed for development on freehold land.

“Our aggregated and complimentary portfolio is in line with the Federal Government’s direction to improve the affordability and security of the national energy market while also delivering on international climate commitments,” CWP’s Ed Mounsey said.

Environmental Impact Statements for the latter two projects are expected to be on public display by the end of this year. Australia’s renewables sector stands in something of a state of flux following controversy over the Federal Government’s National Energy Guarantee (NEG) policy, which critics say will hamper the development of utility-scale renewable energy projects.