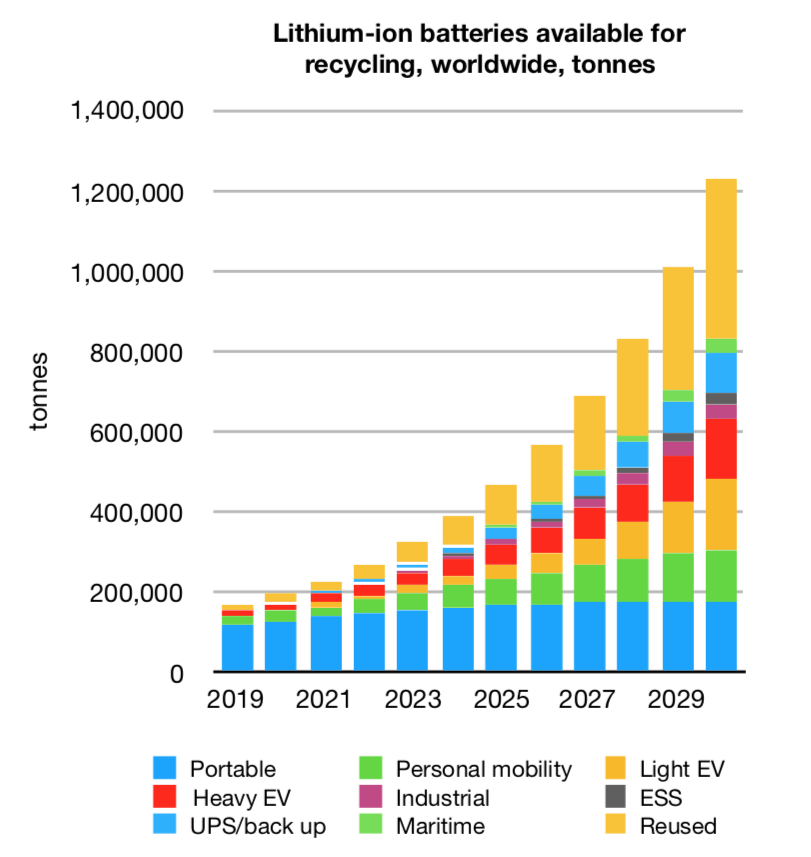 While recycling of lithium and other materials such as cobalt from batteries will greatly increase in the coming years, the potential availability of second life batteries should not be underestimated, according to new research and data.

Hans Eric Melin, an expert on the lifecycle management of lithium batteries with UK-headquartered consultancy Circular Energy Storage, previously commented on the growing volumes of batteries and their materials for this site – something else that the consultant claims is also widely underestimated.

In July, Melin told this site that that more than 70% of lithium-ion batteries recycled today are processed in China and South Korea, with “high” recovery rates of materials, with many of his findings to that point published in a report commissioned by the Swedish Energy Agency.

Circular Energy Storage’s newest data, which the consultant contacted this site about, predicts that “more than 1.2 million tonnes of waste lithium-ion batteries will be recycled worldwide by 2030”. By then, the amount of recycled lithium available to the global battery supply chain will be equivalent to about half of today’s lithium mining market, while the amount of recycled cobalt in 2030 will be around a quarter of today’s equivalent.

Between 2019 and 2030, close to 1,000GWh of “remanufactured and second life batteries” will be in use worldwide. Hans Eric Melin told Energy-Storage.news that it is inevitable that second life batteries will become available “for those who see the opportunities.” While portable electronics batteries will be the overall biggest sector lithium battery waste will come from, 75% of electric vehicle batteries – everything from e-scooters to buses, forklifts and trucks by 10 years’ time could be remanufactured into other vehicles or stationary energy storage systems, Circular Energy Storage has found.

With China expected to dominate lithium recycling efforts – as well as being a likely contributor of some 57% of lithium battery waste by 2030, it’s also likely the country will “take a tighter grip on” recycling and recovery and will also be the biggest source of second life batteries by volume.

“We might soon be buying second life batteries from China as an alternative to new ones. This is already happening in some south Asian countries,” Melin told Energy-Storage.news.

“And if players in Europe don’t see this we might soon export all end-of-life EV batteries overseas just like we have done with our consumer electronics.”

Those recycled and repurposed batteries are expected to hold an average value of around US$45 per kWh, equivalent to a market worth US$45 billion over 12 years, albeit Circular Energy Storage predicts that as more batteries reach their end of life gradually, over 50% of that value could be generated in the final three years of those 12. 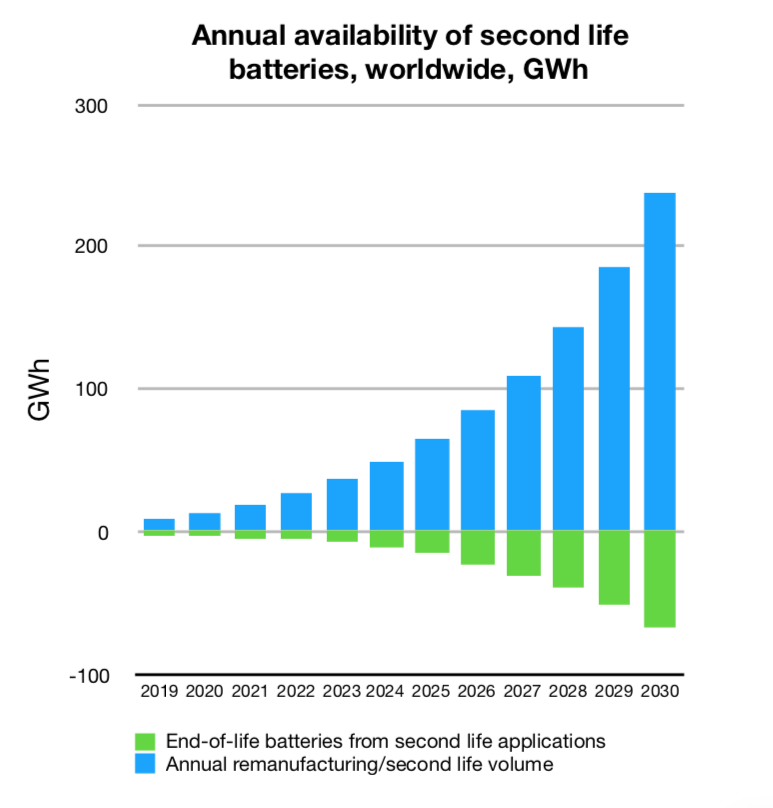 The potential availability of second life batteries and materials should not be underestimated, nor should the potential for recycling, Hans Eric Melin said. Image: Circular Energy Storage.

Asked to comment on the recent award of the Nobel Prize for Chemistry to John Goodenough, Stanley Whittingham and Akira Yoshino for inventing the lithium-ion battery, Melin said the highly recyclable nature of the battery product is still often overlooked, as well as its suitability for second life repurposing, make it an important technology “for sustainability and climate change mitigation.”

“The energy density, its longevity and the ability to scale and optimise it for different tasks is what make the lithium-ion battery so great. That we basically can use the same technology for everything from tiny earpods to electric cars and energy storage systems shows how incredibly flexible it is. These capabilities have made it essential for the decarbonisation of both transportation and energy production just like it has enabled the mobile internet which in itself provide sustainable benefits such as car sharing, e-commerce and digitalisation of previously physical products,” Hans Eric Melin said.

“Thanks to its long cycle life it actually outlive many of the devices it is used for which enables a second life in other applications. That is something we never have seen before. Finally it is highly recyclable and we are already today using recycled materials in the new batteries that are placed on the market. In fact, I would say, the lithium-ion battery is one of the most circular product we use.”

Read a recent feature article from Li-Cycle, one company already recycling lithium batteries and materials, here, or download it from our ‘Resources’ page.