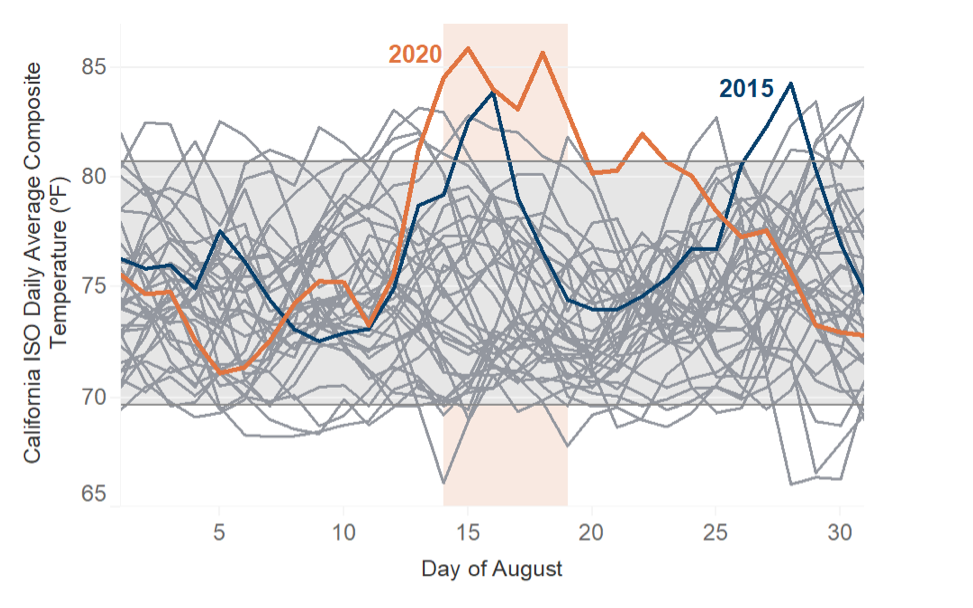 A preliminary report has been issued by California energy authorities into power outages which occurred in August and among the key recommendations it makes is that generation and energy storage projects proceed without delay.

Much finger-pointing took place and blame was apportioned across traditional and social media following the rolling outages, which happened amid a backdrop of extreme weather and wildfires. The California Independent System Operator (CAISO), California Public Utilities Commission (CPUC) and California Energy Commission (CEC) have now issued their Preliminary Root Cause Analysis of the situation.

It finds that the need to respond to a “once in 35-year” heatwave exposed shortcomings in planning of Resource Adequacy for the California grid, as well as in energy market design, while the heatwave itself caused havoc with energy supply. One huge aspect of that was that the heat caused some 1,400MW to 2,000MW in forced outages in the natural gas fleet, combined with 400MW of planned outages of gas plants.

Other contributing factors included the unusual energy demand patterns experienced at the time of the outages on 14 August and 15 August due to the ongoing COVID-19 pandemic. The report said that these “evolving demand patterns” were not anticipated by the authorities’ timeframe for planning and resource procurement which the report described as “necessarily an iterative, multi-year process”.

“This preliminary root cause analysis is an important step in helping us learn from the events of 14 and 15 August,” CAISO president and CEO Eliot Mainzer said.

“We are committed to working with the Governor’s office, state agencies, and the broad set of stakeholders in California and across the Western US to accelerate our efforts to reliably decarbonise the electricity grid.”

One of the big drivers for energy storage, and in particular energy storage in combination with power generation like solar, Resource Adequacy (RA) rules have been developed around meeting peak demand. However, while RA drives forward solar-plus-storage with increasing durations of battery capacity, the principles of RA still pre-date the commercialisation of these technologies.

The report said that RA is planned so that if enough electricity is available to meet the peak, it is assumed there will be enough available to meet demand at other times – back when the grid was fully powered by conventional assets which could run all day and night if necessary. The growth of solar penetration makes this no longer the case and instead of one single peak demand period, there are now “multiple critical periods during the day,” the report argued.

“While RA processes should meet load at all times throughout the day, the net demand peak is becoming the most challenging time period in which to meet demand,” the report said.

“Over time, critical grid needs may manifest in other hours, seasons or conditions as the energy resource portfolio continues to evolve.”

For example, while on 14 August, peak demand at 6:51pm was actually 4,565MW lower than it was at 4:56pm, wind and solar generation had decreased by 5,341MW during that same period. High clouds from storms reduced solar generation and the storms’ wind patterns hampered wind generation, while hydroelectric facilities were depleted by ongoing drought caused by heat.

Current RA planning targets have not been updated since they were put in place in 2004. The regulator CPUC is already running an open proceeding to consider necessary changes to the planning targets for RA rules, with discussion planned to begin before summer 2021.

“We will absolutely adjust our planning, procurement, and market policies to meet these changing circumstances and ensure our energy future is clean, reliable, and affordable for all Californians.”

The report shows that so far, battery storage has only been able to play a very limited role in mitigating the impacts of this confluence of factors. A similar argument could be made for demand response, which many have said could and should also play a bigger role and the report does recommend that demand response and flexibility will likely be among the main areas of focus for additional resources for which development processes should be expedited.

Going forwards, load-serving entities (LSEs) within CPUC’s jurisdiction have begun procuring new capacity to be online by summer next year – an action that is already underway. This includes 2,100MW of energy storage and hybrid storage resources, alongside around 300MW of wind and solar.

CPUC is also working with those LSEs to reduce the risk of delays to projects with online dates of next year: CPUC, CEC and CAISO will all work with developers, state agencies and local governments to make sure projects at risk of delays stay on track.

Indeed, in a list of five main recommendations that the report’s authors made, second – after improving planning processes for RA – was to “ensure that the generation and storage projects that are currently under construction in California are completed by their targeted online dates”.

“This preliminary report is an important milestone to guide our next steps as we strengthen California’s electric grid. The California Energy Commission is committed to continuing to work closely with our sister agencies to build a more resilient and reliable grid and keep pace with rapidly accelerating climate impacts our state is experiencing while also ensuring clean and affordable energy for all Californians,” David Hoschchild, CEC Chair, said.

You can read the full Preliminary Root Cause Analysis report from CAISO, CEC and CPUC here, which details other factors that caused the problems, as well as detailing the efforts undertaken by California energy agencies – as well as by citizens and businesses – to remedy the peak demand problems.