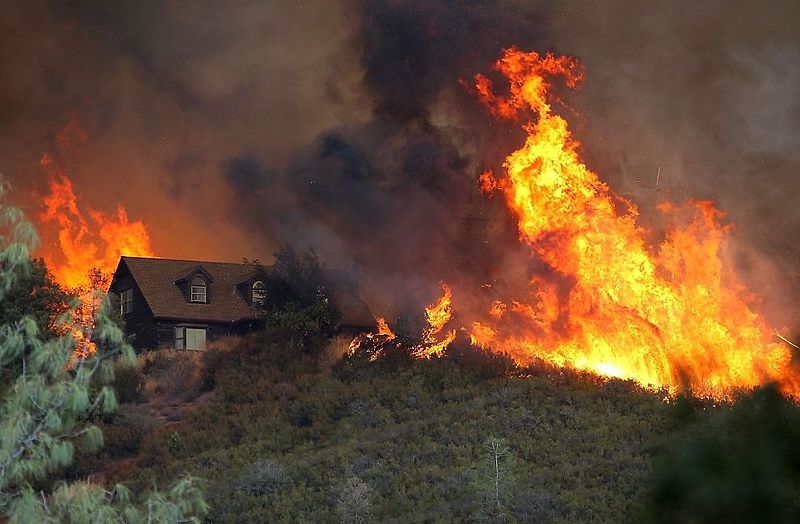 California is the US leader in behind-the-meter residential storage deployment, with recent wildfires (pictured) and the subsequent public power shutoffs contributing to widespread adoption.

In a recent interview with Energy-Storage.news, AutoGrid general manager for new energy, Rahul Kar, acknowledged that California’s recent wildfires had led to people “putting in a lot more batteries,” in the state as they seek to keep their lights and appliances running as utilities enact public power shutoffs that can last for days, or even weeks or months. A report out this week from analysis firm Wood Mackenzie Power & Renewables appears to back this up, finding that California was by far the US leader in behind-the-meter residential storage deployment in the final quarter of 2019.

As reported by this site previously, Kar said that Japan – where AutoGrid is participating in a 10,000 asset virtual power plant (VPP) programme with local partner ENERES – and Australia are also markets where disaster consciousness, be it from storms, fires or earthquakes, are helping drive a strong uptick in interest and purchases of batteries. It helps that these markets already had experienced some deployment of home storage, Kar said.

“One of the use cases is something we are working on with ENERES, is how we provide emergency planning,” Car said.

“Suppose you have an imminent disaster or suppose there’s a storm coming, if there’s an earthquake warning, is there some way that you charge up all the batteries under your control so that it provides relief for whatever period that battery is available for?”

While a technical barriers to doing that is having in place the right software and intelligence to co-ordinate the charging of those batteries, for instance processing weather forecast data and feeding it to networks of many many units, being able to create “co-optimisation capabilities” could turn out to be important for the economic case for customer-sited, behind-the-meter energy storage. It also helps that batteries bought to backup loads for at least several hours at a time tend to be higher capacity in kilowatt-hours than those sold purely for optimising solar self-consumption.

“Suppose someone needs to be ready for offering emergency services like in an imminent storm, while participating in the market, while making sure you’re still optimising the rate tariffs that the customer is on, while making sure that you’re not feeding it back to the grid,” AutoGrid’s Rahul Kar said.

“All of these things are like constraints in the multi-scale optimisation algorithm, and that’s not easy to solve in real-time across hundreds of thousands of DERs. That’s why we invested quite heavily in solving that problem for well over two and a half years and that’s bearing fruit right now.”

After all, Kar said, there have been some VPP projects around the world that show great promise. South Australia’s VPP network programmes that battery storage system providers Sonnen and Tesla have signed up to participate in, are planned to reach a scale of tens of thousands of units over the next few years.

With those being government-run programmes that include systems deployed on public housing helping bulk up numbers, the main barrier until now – and likely in the future – for other VPPs is getting customers to not only buy the batteries but also sign up to join programmes. The latter consideration extends also to making not only the customer understand what they’re signing up to, but also to making the network and the battery manufacturers come to a mutually beneficial arrangement.

“The primary limitation [to VPP participation] is, as with any aggregation play, customer acquisition. That’s where the primary cost goes to. [But also] customer comfort, when you’re acquiring the customer, that you have the right contracts in place.

“If you want to use their batteries for grid services, what sort of payment they’ll get from that and so on. The simpler you make it for them, the easier the customer acquisition. That still is kind of the primary barrier of scalability, which is, especially on the residential side, if you’re trying to aggregate tens of thousands of batteries and sign up residential customers, that’s a pretty significant cost,” Kar said.