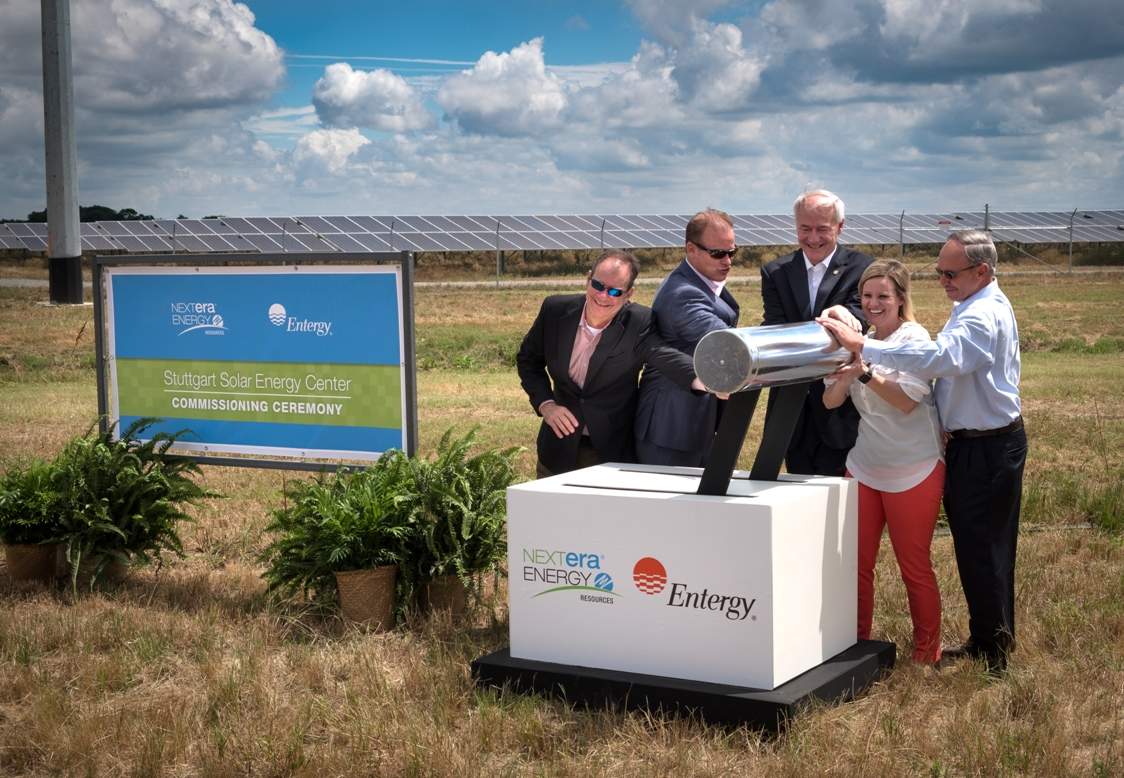 NextEra Resources will build a 100MW solar farm for Arkansas utility Entergy Arkansas, to include 30MW of battery energy storage, as Entergy seeks to build out solar capacity in the state.

Entergy Arkansas said yesterday that it has contracted NextEra Resources, one of the three main NextEra power producer companies along with Florida Light & Power and NextEra Energy, to build the project near Searcy, in White County Arkansas.

Scheduled for completion in 2021, it remains subject to approval by the state’s regulatory Public Utilities Commission (PUC). Entergy will own and operate plant once it has been designed and built by NextEra, bringing the utility’s solar generation capacity in its service area up to 281MW. All of that 281MW capacity will be coming from NextEra plants, following following the completed 81MW project near the town of Stuttgart and the 100MW Chicot Solar farm, currently under construction. Entergy buys the power from both of those plants under power purchase agreements (PPAs).

Entergy did not give details of the planned battery addition to the 100MW Searcy solar farm, except to say that it will be a lithium-ion based energy storage system of 30MW – capacity figures in megawatt-hours were not provided in the utility’s release. However, Entergy did say that the “stored energy is expected to be charged and discharged daily to maximise the value of the solar energy”.

RFP issued for up to 200MW PV capacity

Entergy Arkansas issued a Request for Proposals for the building of new solar power facilities at the beginning of February. The utility set a minimum of 50MW and an upper limit of 200MW to be procured, for projects to be purchased under “build-own-transfer” transaction structures, with all proposed projects to be located within Arkansas’ portion of the Midcontinent System Operator (MISO) service area.

The Request for Proposals document stipulated that solar facilities could include an option for the addition of battery energy storage facilities, costed separately from the solar PV generation. Parties proposing projects may also add in separately costed O&M contract proposals for to two years after they go into service. Entergy Arkansas wants to close financial transactions for asset aqcuisitions by June 2021 and no later than the end of 2022.

“As the largest solar provider and a leader in renewable energy in Arkansas, Entergy is proud to bring a third large-scale solar project to the state that will allow our customers to benefit from the economic and environmental advantages of renewable energy, while at the same time learning about the benefits of battery storage,” Entergy Arkansas CEO and president Laura Landreaux said.

Landreaux said the utility is responding to the wishes of its customers, who Landreaux said wanted to see more solar in Entergy Arkansas’ energy mix.