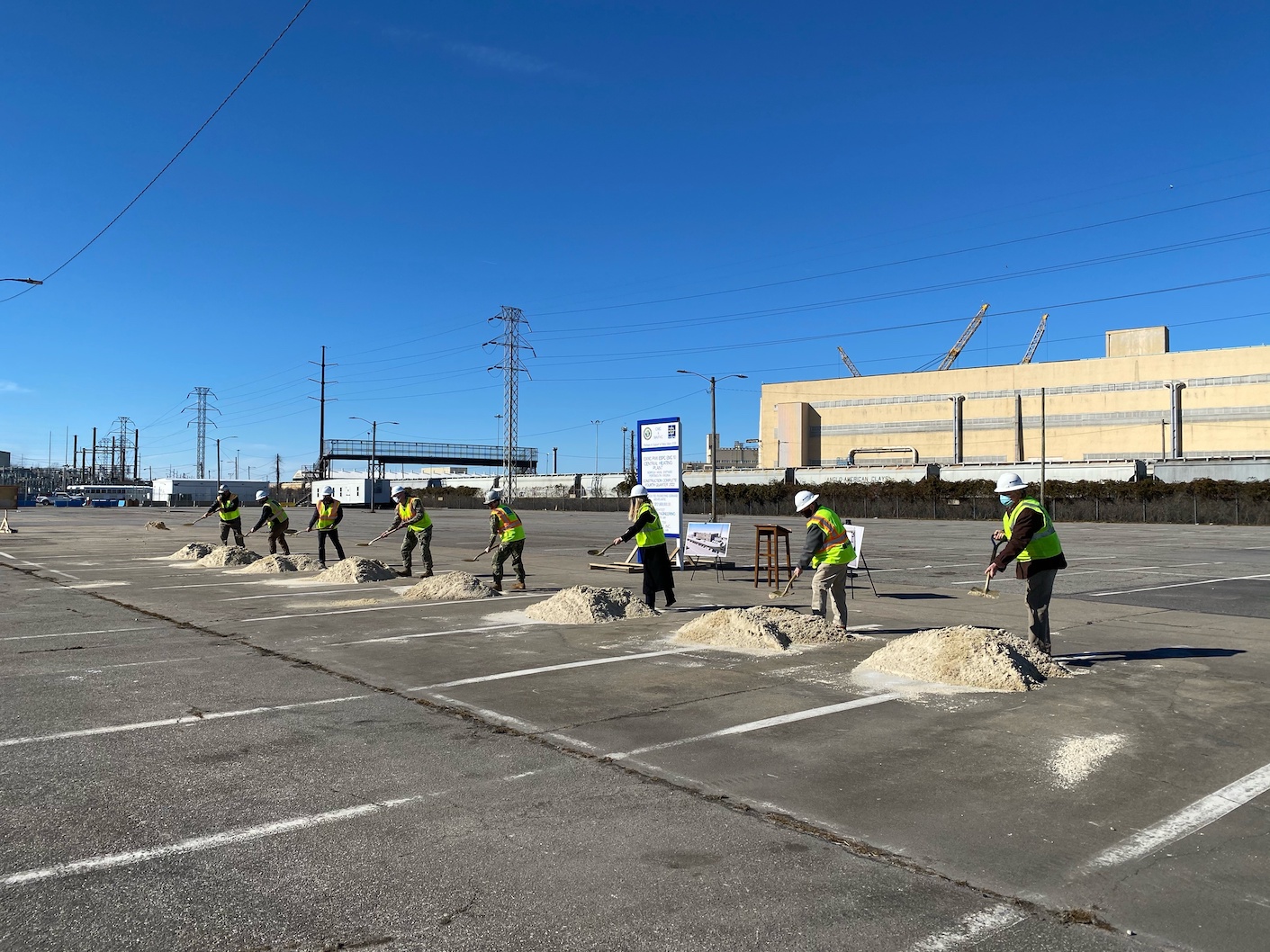 Ground-breaking took place for the upgrade project at the shipyard, for which the Navy will not have to shoulder upfront costs. Image: Ameresco.

A US Navy shipyard is getting an upgrade to its microgrid system from Ameresco that guarantees reliability and considerable energy savings over the lifetime of the project.

Norfolk Naval Shipyard in Portsmouth, Virginia already has a 10.4MW combined heat and power (CHP) plant with a 500kWh battery storage system delivered and maintained by Ameresco to help keep it online and reduce the amount of power and energy the shipyard takes from the national grid. Following the award of a new contract, Ameresco will now install a new 19MW CHP plant together with a 3MW battery and microgrid control system.

The project is worth US$173 million, but the navy will not have to pay for it upfront: like other Federal energy savings projects, the contract was awarded to energy efficiency and renewable energy solutions provider Ameresco on the basis that it will offer significant savings on energy expenditure enough to pay for itself with what is known as an energy savings performance contract (ESPC).

Ameresco will leverage the project’s cost savings to get third-party financing for the project which is expected to reduce demand for electricity from the grid at the site by almost 70%, while also offering resiliency and backup power. Existing onsite backup power assets will be refurbished and integrated into the microgrid setup.

“Within the Federal space, when you're looking at the Department of Defense [projects], there is a strong desire and more of budget being allocated to do projects that have a resiliency component to them, where obviously, the battery will be key in that in the microgrid,” Nicole Bulgarino, executive VP for Federal solutions at Ameresco told Energy-Storage.news in an interview.

Bulgarino said that from the Department, there is “openness and support” to push forward with projects that meet criteria set which include reducing energy and maintenance costs, with battery storage again being a key enabler to hitting those performance metrics. Batteries can not only provide backup power “seamlessly” and reduce onsite fuel usage but also their use can be modelled before installation to demonstrate the savings on cost and the increases in efficiency they can enable: “a pretty powerful tool,” Bulgarino said.

The Ameresco executive VP pointed out that in a recent government Defense Authorisation Act, there is also language that not only encourages the use of resiliency, but also the use of “creative third party financing streams and other incentives to help make sure that our bases are protected from a security standpoint”.

Installation is scheduled for completion in 2022, with Ameresco contracted to maintain the energy system for 20 years. The project’s scope also includes replacement of an industrial wastewater treatment plant onsite. Ameresco also designed ways to recycle water within the plant and upgrading components and design to increase efficiency enough that that too will offer long-term savings, with the solutions provider also installing and maintaining that treatment plant too.

Energy-Storage.news has covered numerous projects financed in this way for US Department of Defense facilities, including a 4MW / 8.5MWh battery storage system supplied by Lockheed Martin to the US Army’s Fort Carson in Colorado, a 20MW solar-plus-storage project with gas-fired backup at a US Air Force base in Texas by Ameresco and another CHP-plus-battery scheme at a US Marine Corps facility in South Carolina, also by Ameresco.