After bushfires, batteries seen as wise investment in Australia 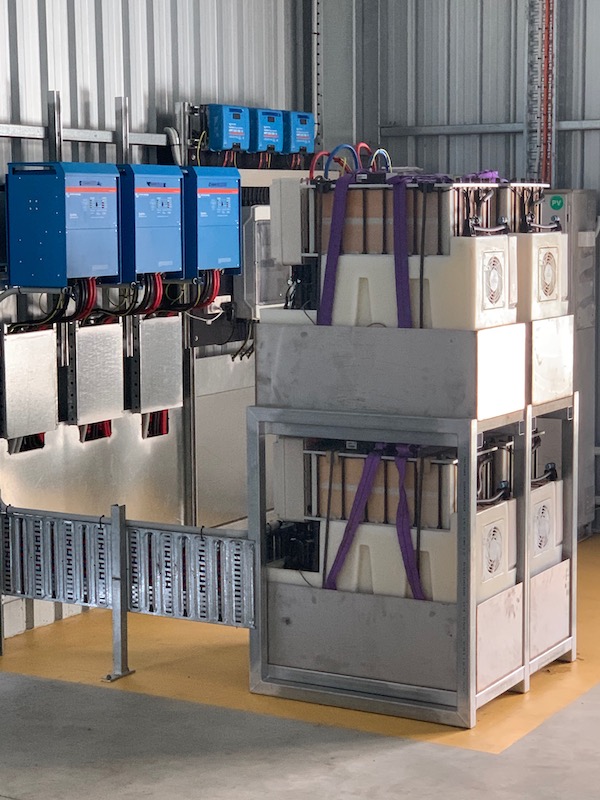 Redflow’s zinc bromine flow batteries, which use a large proportion of plastic and other easily recyclable materials, coupled with Victron inverters at the Murrays’ farm. Image: Redflow.

“The bottom line is that this is a good business decision. We will get back our money in eight to 10 years at the current price of power. As the price of energy goes up, we’ll pay it back even quicker.”

While the tragic total cost of bushfires and how much their threat has been exacerbated by climate change is still being figured out, the Murray farm and residence was spared by the fires. However, a day-long blackout did occur as power was cut off, and the following days saw many more outages. Furthermore, Jeff Murray said his property has long been affected by frequent blackouts already, irrespective of the fires, as well as power surges.

“Our water comes from two bores, so without power, we can’t get any water. If fire does reach us, we need energy to run the pumps to defend our property, which is why the bushfire was the last straw for us,” Murray, a former firefighter, said.

To counter the impact of the “debilitating” power quality issues, the solar-plus-storage system can take the whole property off-grid, although it is still connected as normal. Murray also said he chose the zinc bromine flow batteries over lithium-ion due to his concerns over the latter’s fire safety as well as Redflow’s claimed recyclability of its devices.

“Now the system is in place and we’re going well. I’ve driven it pretty hard since we’ve had it, like turning on pumps when I didn’t need to. I’ve taken batteries down as low as I could and then kicked in the grid purely to charge the batteries. It has taken everything I threw at it. I can check the system via the Internet whenever I want,” Jeff Murray said.

A recent report by analysis group IDTechEx highlighted that flow batteries – which different manufacturers are offering with different electrolytes, most commonly vanadium – could be a good competitor for lithium-ion.

A release from the group did not strongly highlight the fire safety issue but instead focused on other possible advantages over lithium-ion that include the longer cycle life without degradation of key components that flow batteries can achieve, as well as the aforementioned recyclability. Redflow recently scored a deal with a telecoms provider in New Zealand in late November, building on similar deals to power distributed telecommunications infrastructure in other territories including South Africa, while the company blogged for this site a while back about an off-grid 'hybrid' project for a remote community in Thailand which combined its flow batteries with lithium-ion devices.

Lithium-ion of course continues to be the most popular choice for new systems in today’s global energy storage market at all scales, by some distance.

Also in response to bushfires, South Australia’s state government via its Department of Human Services has offered free battery energy storage systems to homeowners affected by the 2019-2020 fires.

According to an announcement at the beginning of this month, battery systems will initially be offered to 188 households that completely lost their homes, although the government said it is “continuing to look at opportunities to extend this initiative to other households impacted”.

Germany-headquartered manufacturer sonnen’s sonnenBatterie Eco 9.53 Hybrid Single Phase systems will be offered, one battery per eligible residence. The systems will, however, only be capable of backing up loads in the event of outages at an “additional cost to the household,” the South Australia government notice said. Similarly they would “likely require additional hardware and detailed usage analysis and system design,” to be used for off-grid locations, the notice read.

Sonnen’s choice of battery chemistry may also be pertinent – the company has elected to use lithium iron phosphate (LFP) batteries exclusively, which although have a lower energy density than the competing nickel manganese cobalt (NMC) sub-chemistry, are more tolerant of heat and knocks.

“Sonnen battery modules have been tested and certified to IEC 62619 and UL 1973 standards and are deemed as not posing a fire hazard under AS/NZS 5139:2019. The sonnen LFP2 modules do not ‘out-gas’ in normal operation and will shut down in cases of extreme heat. In the extreme event of an actual fire this will not cause any exacerbation of the situation,” the South Australia government’s site said.

Owned since early 2019 by oil company Shell, sonnen has set up manufacturing facilities in Australia for reasons of complying with local domestic content rules for eligibility for government grants and virtual power plant (VPP) programmes as well as to gain proximity to market demand. Sonnen CEO Christoph Ostermann described Australia as one of the most exciting markets for energy storage in the world at the time of announcing those manufacturing plants, in 2018.