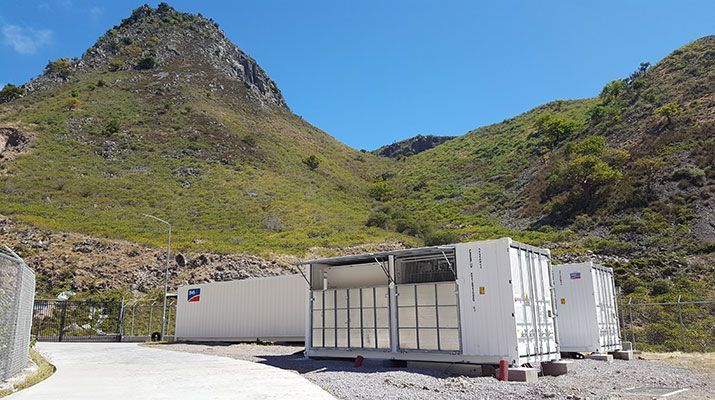 The project on Saba aka the real ‘Skull Island’ of King Kong. Image: SMA.

Saba Electric Company, sole supplier of electricity to the Dutch Caribbean island of Saba, celebrated as the island ran on 100% solar for the first time ever this month, with the switch-on of a solar-plus-storage microgrid.

Diesel generators were switched off as a 2.3MWh battery energy storage system went into action. On Wednesday 6 March from 3pm to 5pm, Saba Electric Company said, the generators powered down, reducing the usual noise pollution to nothing.

Although the diesel was needed again to cover a shortfall overnight, by 8am the next morning, the island was running on solar once again. Under “ideal weather conditions”, the utility said, nine to 10 hours of energy demand for the island’s 2,000 inhabitants could be covered by the installation.

The energy storage system was supplied by PV inverter company SMA’s subsidiary SMA Sunbelt Energy, while the solar portion of the project was delivered by Dutch PV project developer Ecorus. Saba has two PV parks, which were expanded up to 2MWp capacity in its latest expansion phase.

SMA Sunbelt Energy is both turnkey provider of PV hybrid and energy storage system projects and a component supplier for off-grid system projects. For the SEC battery energy storage project, while SMA supplied the whole system, the company emphasised the role of its Sunny Central Storage 2200 inverter, which is connected to the medium voltage grid, as well as its SMA Hybrid Controller, which can control the switching off of diesel generators without compromising grid stability, the company claimed. The battery system can also smooth out even milliseconds of gaps in solar production due to cloud cover.

“A Medium Voltage Power Station equipped with one Sunny Central Storage 2200 battery inverter with grid-forming capability is responsible for ensuring the system frequency even without diesel generators. It stabilises the grid and provides the reserve power from the batteries,” SMA Sunbelt Energy project manager Jorge Velez said, adding that the system can save the diesel generators from burning through 300 litres of diesel an hour.

Energy-Storage.news reported in November 2017 that SEC was tendering for the project, calling for at least 1MW of solar generation and a minimum of 1.5MWh of energy storage, (noting incidentally that Saba is famous as the location for the mythical ‘Skull Island’ in the classic King Kong monster movies). As the system went online, Saba Electric Company CEO Dexter Johnson said total diesel fuel savings have been calculated to potentially be around 1 million litres per year.

“We are very happy with the result and expect that Saba’s inhabitants can be supplied with solar power exclusively for up to ten hours on sunny days.”

“It is a great milestone for Saba. From now on the entire energy supply of our island will come to a large extent from renewable sources,” Johnson said.

It’s the latest project to enable Caribbean island dwellers to gain greater independence from imported and polluting fossil fuels, with Energy-Storage.news having reported on numerous projects in the region. Meanwhile, for SMA it marks its second major project on a Dutch Caribbean territory, having already worked on a larger project for the island of St Eustatius, completed in 2016.