What you should know about manufacturing lithium-ion batteries

Ensuring high quality levels in the manufacturing of lithium-ion batteries is critical to preventing underperformance and even safety risks. Benjamin Sternkopf, Ian Greory and David Prince of PI Berlin examine the prerequisites for finding the 'sweet spot' between a battery's cost, performance and lifetime.

The proliferation of rechargeable lithium-ion batteries used in a wide range of applications has moved the technology clearly into the public eye. Debate about various battery types, their properties, cost and performance have become popular topics in private and professional discussions.

However, most of these discussions tend to put an excessive emphasis on the chemistry of the cells in the batteries. For example, whether a lithium iron phosphate battery is safer than a lithium-nickel-manganese-cobalt battery. In truth, battery performance is affected by not just one, but up to five primary factors: cell chemistry, cell geometry, manufacturing quality, matching technology to application, and system integration.

Cell chemistry is considered to be the “tip of the iceberg”. It is the most visible characteristic, but the actual performance of battery systems in real-world applications seldom depends to a large degree on the cell chemistry. More often it is one of the other five factors.

Manufacturing quality is one of the most critical factors, but also least discussed. The cause for this is likely that cell chemistry and geometry can easily be discussed based on the multitude of information available in the public domain. Matching of the most suitable battery chemistry to the application is a topic that can be simulated and discussed with modern computing tools. Manufacturing and manufacturing quality, however, is typically an in-house secret of each manufacturer – and often exposes clear differences between manufacturers even when using the same chemistries. There is little incentive for manufacturers to have details about their manufacturing processes published in any form.

What is a “battery energy storage system”?

The term BESS, or battery energy storage system, refers to a system that is more than just a battery. For a battery to function efficiently it needs additional components. A BESS typically includes a power conversion system, otherwise known as an inverter, which includes bi-directional power electronics used to charge and discharge the battery simultaneously. A power control system informs the inverter when to charge and discharge batteries. Additional cooling and fire-fighting systems are installed to prevent and contain any thermal related events. And finally, auxiliary power supplies as well as a storage container are needed to support and house the overall system.

Due to the complexity of a complete BESS, this article focuses on the batteries and their manufacturing only. For real-world projects, it is advised to keep in mind that the battery is only one part of the overall system. The other components and the interactions between them need to be evaluated with the same care to achieve high levels of BESS performance and safety. 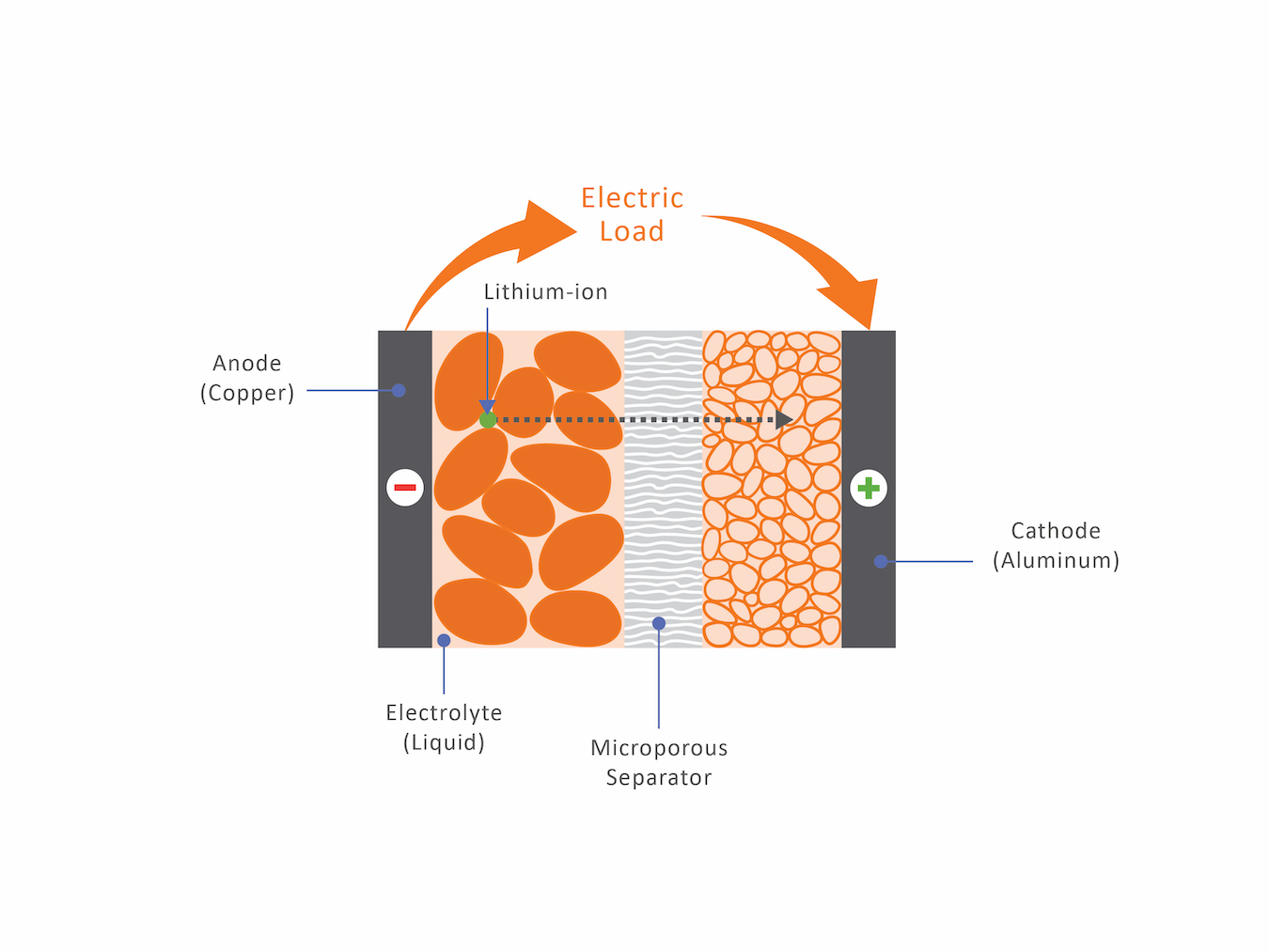 Structure of a battery rack

Before examining how battery cells are manufactured, it is good to understand how a battery rack is organised. Battery cells are similar in design to cell phone or laptop computer batteries, except that they are much larger. Cells are combined into a cell block using either a serial or parallel connection. Cell blocks are assembled into modules with communication ports to measure temperature and voltage. These modules are then connected within a rack, which provides the serial connection for battery modules. The battery rack will also include an upstream control system known as switchgear, which provides current sensors and communication protocols. It is important to note that this arrangement is based on IEC standard terminology and some may use different terminology.

Design of a battery cell

The purpose of a battery is to move electrons from the anode to the cathode while discharging the battery. This is accomplished by having lithium-ions, positively charged particles, moving through a microporous separator that is filled with an electrolyte, which prevents the passage of electrons. This process is sandwiched between a negatively charged copper collector and a positively charged aluminum collector. It is important to have homogenous surfaces to allow the lithium-ions to pass through easily.

Manufacturing of a battery

At first glance, a battery has cells, modules and strings – which makes it similar to a PV panel. However, major differences become obvious when comparing the individual cells. A PV cell operates according to the quantum photovoltaic effect; a battery cell relies on chemical reactions. The operating principle of a battery is more like a chemical process engineering plant, and as a result the manufacturing processes differ significantly.

Unlike PV cells, lithium-ion battery cells need to be monitored individually for voltage, current and temperature for safety and performance reasons. The quality and accuracy of the battery management system plays an equally important role in the performance and safety of the overall battery system. That means all processes related to the manufacturing of the corresponding electronics need to be managed similarly to the production of a PV inverter.

To manufacture these cells, it is critical to create this surface with extreme precision. A common benchmark is that the maximum deviation of surface thickness should not exceed 1% to 2%. If a manufacturer exceeds this, the battery runs a higher risk of becoming a safety hazard and suffering accelerated performance degradation.

This is the opening extract of an article which appears in full in the latest edition of our quarterly technical journal, PV Tech Power (Vol.24), in 'Storage & Smart Power', the dedicated section contributed by the team at Energy-Storage.news. The full article looks at each of the different manufacturing steps in detail, as well as discussing other critical factors in decision-making such as warranties and testing. To download the entire article as an individual paper, or to subscribe to or download the entire 108-page book, visit the PV Tech Store.