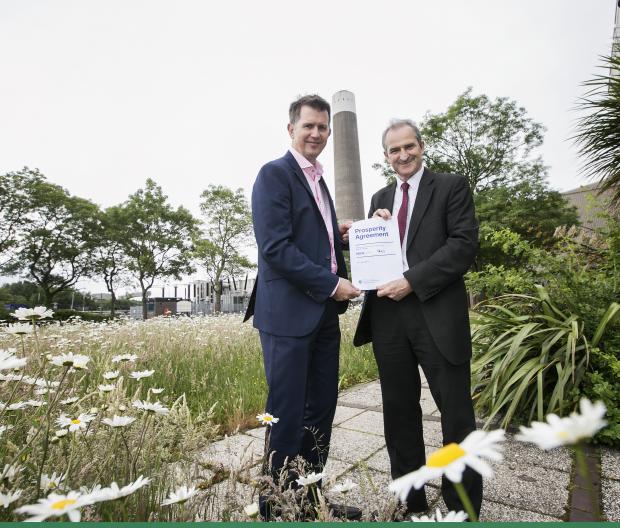 System integrator and tech provider AES signing an agreement to develop utility-scale energy storage projects in Northern Ireland, which is part of the UK. Image: AES.

In the past month we have heard a lot about the future of storage in the UK. From transmission network operator National Grid we have seen forecasts on the potential of the market in its latest Future Energy Scenarios – charting likely outcomes in the energy market to 2050, while regulator Ofgem released the long awaited response to last year’s flexibility Call for Evidence acknowledging many of the key actions that industry would like to see to boost energy storage.

However in the same week National Grid released a consultation raising questions over the de-rating of batteries providing capacity market services, which could have an impact on some of the projects planning to participate in the next auctions.

All the while we have been seeing this mixed bag of announcements, the industry has been moving forward. The total pipeline of utility scale projects has reached over 3.5GW and the installed capacity has grown to over 80MW.

The capacity has been measured in MW as this unit is more commonly used at the earlier stages of development, especially for planning purposes.

The status of the UK pipeline 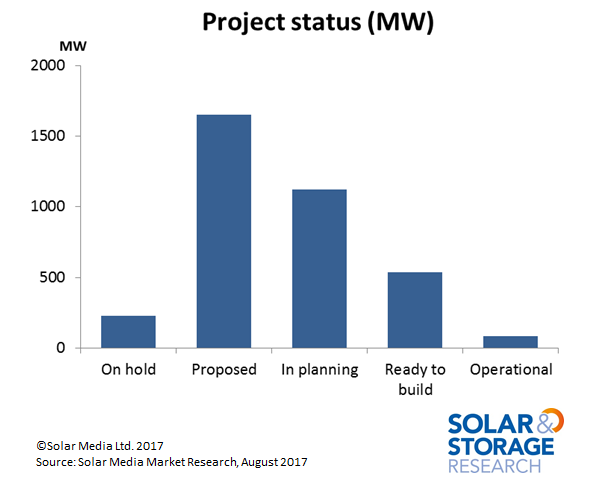 Operational projects have increased to over 80MW made up of around 40 projects. The average project size has been small to date – most projects are under 1MW – with the four largest projects accounting for around 50MW.

The average project size looks set to increase with several 50MW projects in the ready to build category. The average size of projects at this stage is 20MW, reflecting trends globally as grid-scale batteries become more widespread, and there are over 500MW of projects in this category that could be built over the next 12 months.

The proposed and in planning categories show what is coming through the system next, with projects at the planning stage likely to be eyeing up the next capacity market auction and keeping a close watch on National Grid’s decisions on how it will procure future frequency services. This category also shows that the uptick in applications during 2016 was not a one off and that there is a significant pipeline coming through which will be built out over the coming years. 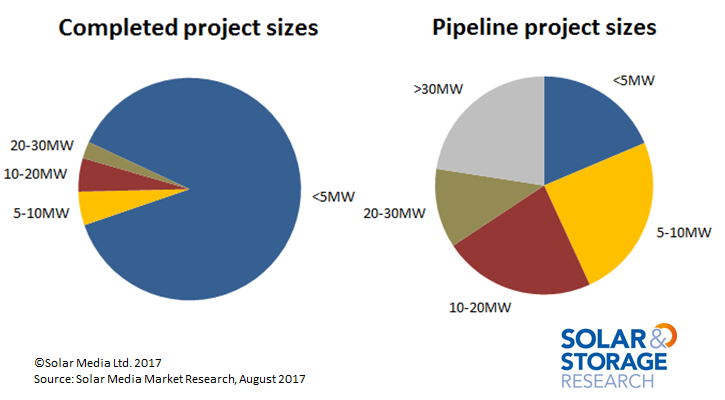 If we look at completed projects, we can see that the majority are small, made up of demo and research projects resulting from partnerships between companies and distribution network operators (DNOs) for example.

Going forward there is a lot more diversity in the pipeline, with projects typically anywhere in size up to 50MW. Projects co-located with renewables are typically at the smaller end of the scale, for example those proposed with wind and solar farms typically have a capacity smaller than the generation of the site, primarily to balance the output but also to offer grid services.

Stand-alone projects are typically larger as they need to be able to take advantage of economies of scale and access grid service contracts to make the financial model stack up. We can see a variety of projects sizes in this group and even in individual developer’s pipelines, and so it is clear that this is still a developing market and the recipe for a successful project is not yet clear cut.

What we can learn from this landscape is that the market is continuing to transform and as projects move towards completion we are seeing a wider range of business models and applications. The installed capacity will increase quickly as we start to see the larger projects being completed and while we do expect to continue to see a range of sizes built, larger projects will account for the highest proportion of the overall installed capacity.